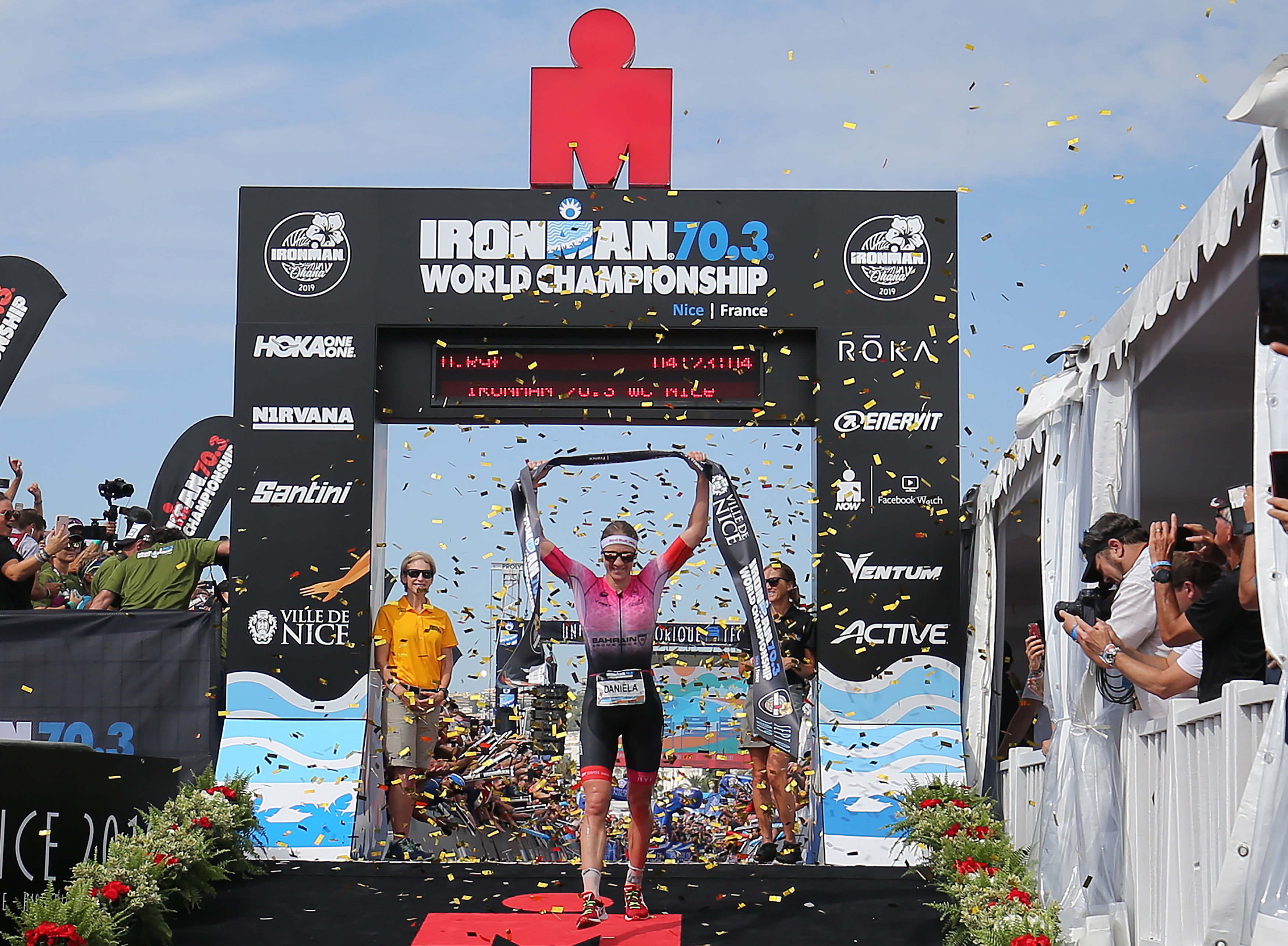 After a week of hot weather and an afternoon of rain and thunderstorms yesterday, the field was relieved to find clear skies and slightly cooler temperatures as their race got underway at Quai des Etats-Unis.  Super swimmer Lucy Charles-Barclay (GBR) put in one of her trademark swim performances, breaking away within the first 50 meters and exiting the water in 25:23, 58 seconds ahead of Brazilian Pâmella Oliveira who placed fourth at the 2018 IRONMAN 70.3 World Championship in South Africa. The chase pack of Holly Lawrence, Ellie Salthouse (AUS), Haley Chura (USA) and Lisa Norden (SWE) followed less than two seconds back. Race favorite Ryf exited in the second chase pack along with the pro women’s dark horse, Imogen Simmonds.

Onto a very tough and technical bike course leading up to the Col de Vance, Charles-Barclay and Lawrence flew out of transition with Ryf behind them quickly picking off the leading swimmers to work her way up the field as they headed out towards the climb. With another strong biker, Amelia Watkinson (NZ) having led the race into the climb, the experience of Ryf showed as she attacked the descent and took control of the race. A drafting penalty served by Charles-Barclay early on took her out of contention for the podium, but Lawrence and Simmonds stuck within a three-minute window to the leader, never truly letting her get away. Ryf entered Transition 2 in 03:04:28, only 02:26 ahead of Lawrence, while Simmonds was following only five seconds behind. The chase pack now further off the pace, Watkinson, Charles-Barclay and local favorite Manon Genet (FRA) was pushing hard to catch up.

See also:  Ryf Repeats at Kona with a Record-Breaking Performance

Setting the pace on the flat and fast two-loop run course, Ryf worked hard to try to put distance between herself and her chasers but Lawrence was ready for the battle. Having closed 26 seconds on Ryf in the first six kilometers, closing the gap to only two minutes, Lawrence seemed intent to claim the top step of the podium. However, Ryf’s world-class form was simply unbeatable. She picked up the pace in sweltering conditions to run to victory in 04:23:04 with Lawrence coming at second place in 04:27:02 and Simmonds in third in 04:28:10. Chelsea Sodaro (USA) with a fantastic run split, ran herself into fourth place in 04:31:07 while Lucy Charles-Barclay did well to turn around the day and claim fifth place in 04:31:50. Genet made the French community proud with a Top 10 performance, finishing in eighth with a time of 04:34:14.

“I don’t think it matters how many titles you have, I think it’s races like today that matter,” said Ryf at the finish line. “For me today was a fantastic day, the girls were pushing really hard, I think it was amazing.  The level in the swim was just fantastic, you know it’s crazy to see how well everyone swims at the moment and I had a fantastic swim but came out with ten other girls! Then on the bike the same, I felt good but everyone was pushing hard and the girls were attacking at certain moments and in the end I was happy to make a little gap downhill. You needed a lot of skill today. Then on the run it was similar, Holly was pushing hard today, and I knew I had to show a really good run to be able to win. I really got pushed to my absolute maximum today and my absolute best, and you know that’s what World Championship races are about.  I’m really happy I could come home with the win today.”

The incredible professional field as well as age-group athletes tackled the swim of 1.2 miles (1.9km) in the pristine waters of the Mediterranean Sea on the Roka swim course, take on a challenging 56.7 (91.3km) Ventum bike course that leads to the Col de Vence and run the 13.1-mile (21.1km) HOKA ONE ONE run course along Nice’s historic Promenade des Anglais waterfront, cheered on by family and fans. In order to qualify for the 2019 IRONMAN 70.3 World Championship, more than 200,000 age-group athletes competed to earn slots at over 100 IRONMAN 70.3 events held worldwide

The two-day IRONMAN 70.3 World Championship event will see over 5,500 registered athletes from 100 countries, regions and territories compete in the world-renowned event, and the largest IRONMAN 70.3 World Championship event to date.  Athletes range in age from 18 to 80 years.  Race weekend continues tomorrow, Sunday 8 September with the men’s pro race starting at 07:00am CET.

Full results for the 2019 IRONMAN 70.3 World Championship can be found at
www.ironman.com/triathlon/events/americas/ironman-70.3/70.3-world-championship/results.aspx.