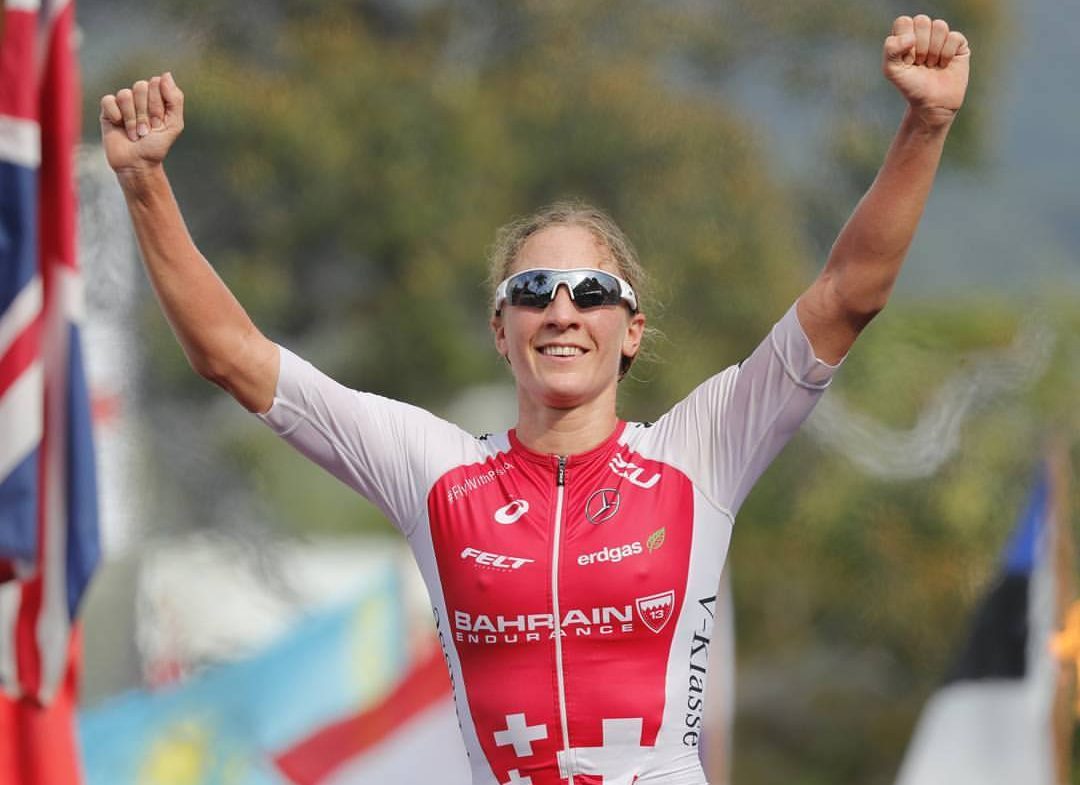 Daniela Ryf (CHE) won the 2017 Ironman World Championships, becoming champion for the third straight year, cementing herself as one of the greats at Kona.  Ryf is only the 4th woman in history to win the women’s title in three consecutive years, joining Kona Ironman greats Paula Newby-Fraser, Natascha Badmann and Chrissie Wellington.

The day would start with the world-class open water swimmer Lucy Charles of Great Britain and Lauren Brandon (USA) quickly bolting out on the swim course.  At the u-turn mark, Charles will be first, with Brandon on her feet.   Noted strong swimmer Haley Chura (USA) was 55 seconds back.  The chase pack was 1:50 back, and that includes defending Champion Ryf.

Lucy Charles expectedly was out of the water first at 48:48, just 5 seconds off the swim course record for women set by Jodi Jackson.   Brandon came out 5 seconds later at 48:53.  Ryf was in the chase pack, at 8th place 4:23 behind the leader. Charles and Brandon continued to lead at mile 19 miles of the bike, but the surprising story at that point was the inability of Ryf to gain ground on the leaders.  Ryf lost ground at that mark and was off by 5:44.  By the halfway mark at Hawi, Charles and Brandon continues to lead Ryf, Sarah Crowley and Annabel Luxford.   The chase group are 5:25 off the lead.  Again, at that point, many were wondering about Ryf’s inability to gain ground on the leaders.

By the 100th mile mark of the bike, Charles leads Brandon and a +1:25 gap  while Ryf has narrowed the gap  to +3:22 and Crowley +3:39.  The move that everybody was expecting of Ryf was made at 108 mile mark when she narrowed the gap to 39 seconds, and also passing Brandon at that point.  And at the closing miles of the bike, Ryf would pass Charles for the lead.   She made up 5:25 minutes in less than 25 miles. Ryf would time a 4:53:10 split and go into T2 in the lead with Charles 40 seconds behind. By the 5th mile of the run, Ryf has made her 45 second lead going out of T2 into 2:32 over Charles. By the Energy Lab turnaround, Rfy increased her lead with a gap of +6:28 on Charles, and +10:12 on American Heather Jackson and Crowley.  At 21 miles, the lead just kept on growing for Ryf.  The gap was  close to eight minutes over Charles at that point with  Crowley and Jackson occupying 3rd and 4th respectively.

Ryf went on to pad her lead and finish in 8:50:47, a dominating 8 minutes and 50 second winning margin over Kona rookie Lucy Charles.  Charles would stamp an amazing debut at the Ironman World Championships,  clocking a 8:59:38 at only 24!  Two years ago she was competing as an age-grouper, but already one of the fastest swimmers over the whole field.  Crowley finished in 9:01:38, to complete the women’s podium spots.

More in News
Short course superstar Mario Mola to race his first the half iron distance on October 17th
September 24, 2015