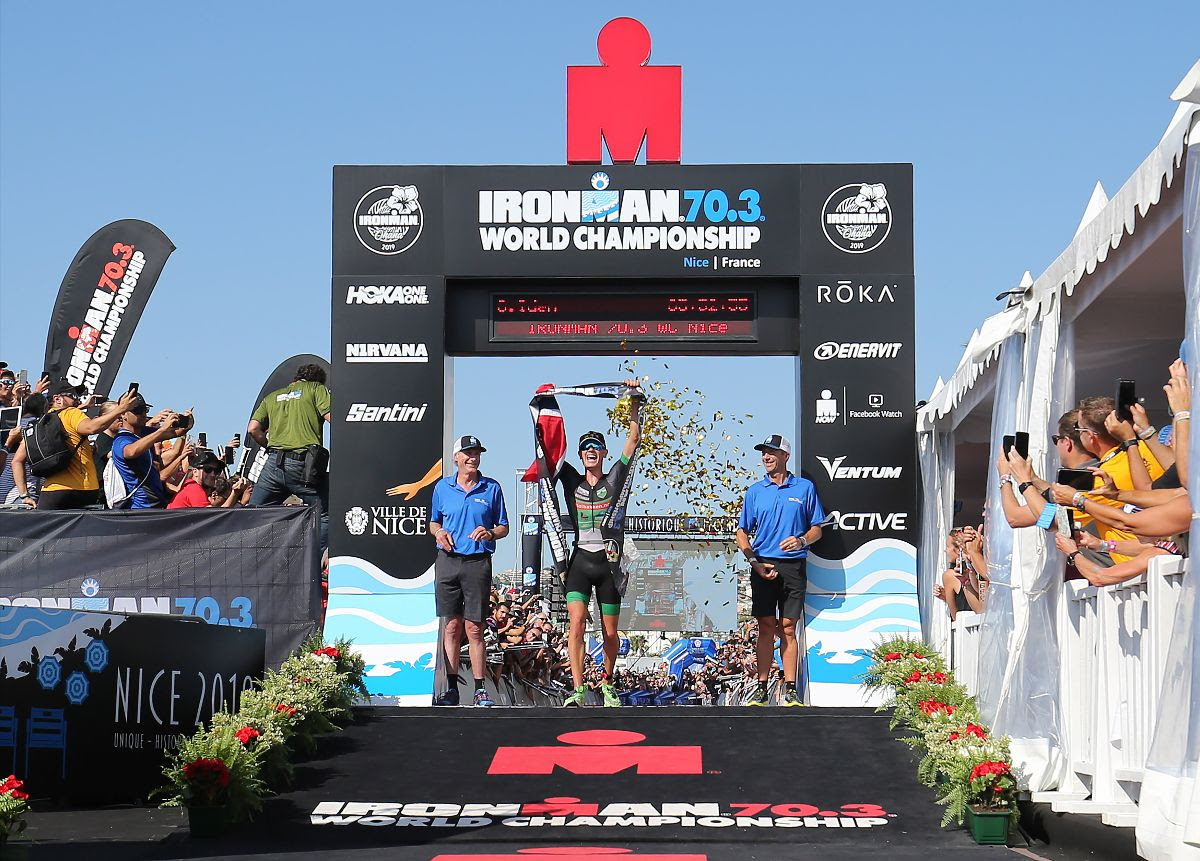 NICE, France (Sept. 8, 2019) — An epic battle unfolded on the second day of the 2019 IRONMAN®70.3® World Championship as a field of the world’s top male professional triathletes took on a tough and technical course in Nice, France today. With a bike course that included multiple passes and exciting head-to-head racing, it was 23-year-old short-course specialist Gustav Iden (NOR) that claimed victory after a powerhouse performance on the bike and run. Multi-time Olympic Gold Medalist Alistair Brownlee (GBR) and local favorite Rodolphe Von Berg (USA) fought hard for the second and third spot on the podium. Approximately 3,500 male athletes were registered to race at the 2019 IRONMAN 70.3 World Championship.

Following yesterday’s exciting female race, the day kicked off with ideal conditions. Due to higher water temperatures, the race featured a non-wetsuit swim. Josh Amberger (AUS) took the expected early lead in the swim, exiting the water in 23:15. Brownlee followed only two seconds behind with the chase pack of Sam Appleton (AUS), Ben Kanute (USA) and Daniel Bækkegård (DEN) following closely. The caliber of racing showed as the first 15 athletes out the water were separated by no more than 15 seconds, while other race favorites like Von Berg, Sebastian Kienle (GER) and Frederik van Lierde (BEL) were chasing further back in the field.

Out of transition, it was Kanute and Brownlee attacking the bike course with Kanute taking the early lead before Brownlee passed to take control of the race around 27km. Kanute was not letting Brownlee ride off uncontested, but the true threat was reeling them in from behind in the form of incredible bikers Iden and former Nice-local Von Berg.  Having grown up training on the roads in-and-around Nice, Von Berg had the home turf advantage, knowing exactly when to attack. Iden, an experienced biker and ITU athlete, was calculating his moment at the same time and passed Kanute for second place as positions changed frequently into Col de Vance. While Brownlee was looking comfortable into the climb, Von Berg saw his opportunity and made a sensational charge for the lead on the descent at about 60km – surprising Brownlee and Iden with the bold move. Von Berg’s gusto paid off as he held off Brownlee, Iden and Kanute to enter Transition 2 in first place with a bike split of 02:17:24, the fastest of any pro on the day.

Having entered T2 with only seconds separating them, the race was on between Von Berg, Brownlee, and Iden. It was a battle of will and skill as the leaders ran nearly side-by-side for the first 6km – Brownlee pushed hard to gain ground, however he could never truly get away from Iden who stayed close and made his pass just before the 6km mark to take the lead of the race. The pro male chase pack led by Von Berg was approximately 01:24 behind at 6km, but the energy expended on the bike course was starting to show as his pace slowed. While Brownlee worked hard to stay with Iden, the Norwegian’s speed in the sweltering conditions was too much to beat. Iden cruised to victory in 03:52:35, putting nearly three minutes between him and his closest rival. Brownlee finished second in 03:55:19, while Von Berg claimed the last step on the podium in 03:56:45 to the delight of locals.

“It feels so amazing. I was joking on Instagram that I was just going to go out and go do it, but to be here as a World Champion – its unbelievable, and its amazing,” said a happy Iden on the finish line. “I was just thinking about staying in the front pack and maybe pushing a bit on the downhill. The race tactics changed during the race though! To be World Champ right now is so amazing and now I’ll be focusing on the Olympics next year. I’d love to go long-distance and do an IRONMAN, and then I’ll try really, really hard to win the IRONMAN World Championship in Kona one day too.”

The incredible professional field as well as age-group athletes tackled the swim of 1.2 miles (1.9km) in the pristine waters of the Mediterranean Sea on the Roka swim course, take on a challenging 56.7 (91.3km) Ventum bike course that leads to the Col de Vence and run the 13.1-mile (21.1km) HOKA ONE ONE run course along Nice’s historic Promenade des Anglais waterfront, cheered on by family and fans. In order to qualify for the 2019 IRONMAN 70.3 World Championship, more than 200,000 age-group athletes competed to earn slots at over 100 IRONMAN 70.3 events held worldwide

Next year, the 2020 IRONMAN 70.3 World Championship rotates to Taupō, New Zealand where there is a long IRONMAN history that spans 20 years, before reaching the Red Rocks of St. George, Utah in the United States in 2021.

Full results for the 2019 IRONMAN 70.3 World Championship can be found at
www.ironman.com/triathlon/events/americas/ironman-70.3/70.3-world-championship/results.aspx.

Best of the Best Images from the 2019 Ironman 70.3 World Championships in Nice, France