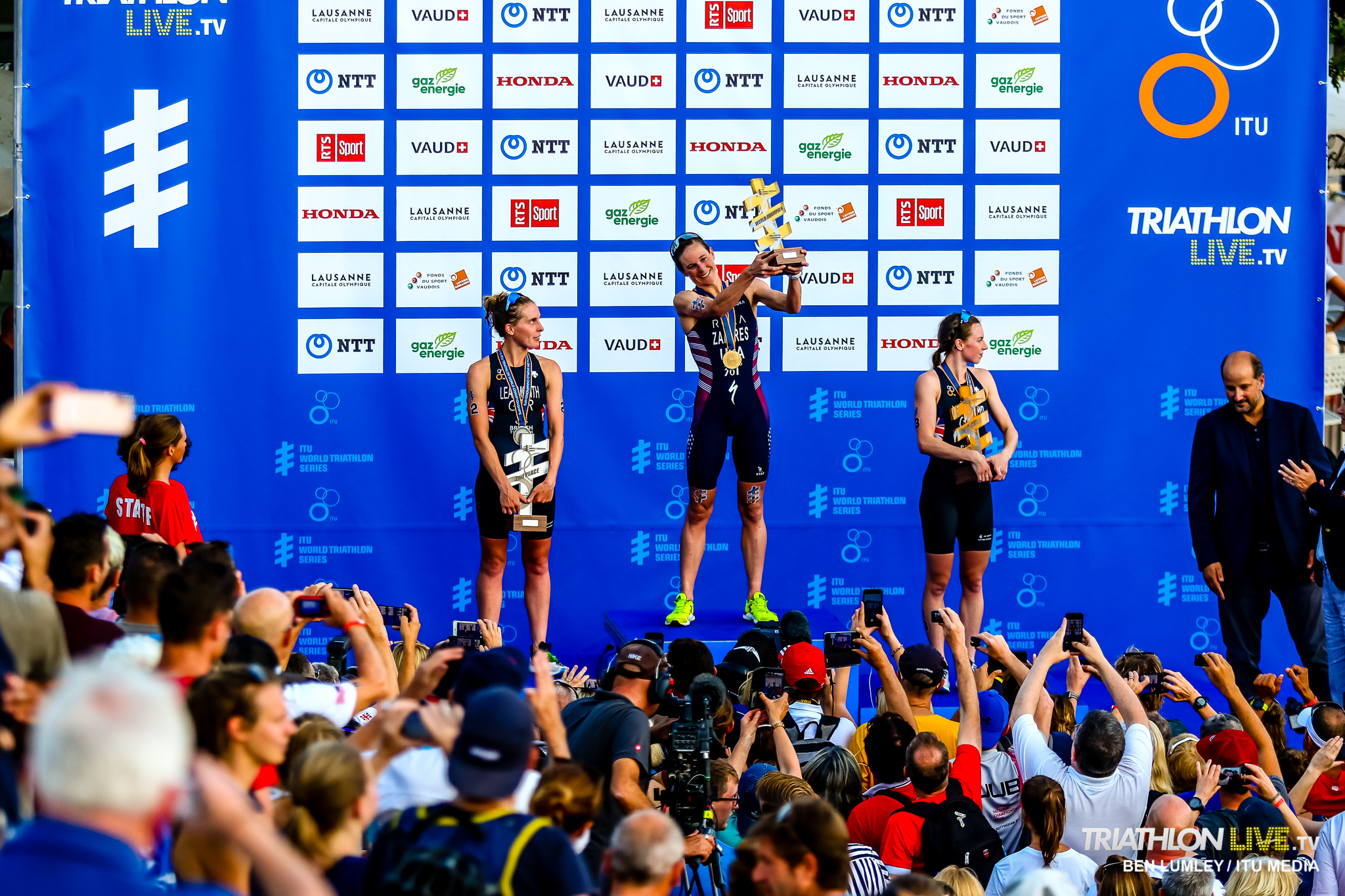 Katie Zaferes became ITU World Champion on Saturday evening in the Olympic Capital Lausanne, sealing the greatest season of her career with a fifth WTS gold of the year. It all boiled down to another incredible battle with British duo Jessica Learmonth and Georgia Taylor Brown, but it was Zaferes delivering yet another big finish, pulling away from Learmonth down the final 200 metres to drink in the magic of the moment that a hard season had built up to.

“I don’t even know if it has hit me yet, I had a lot of emotions and doubts coming in to this race but I’m just really happy right now,” said a thrilled Zaferes. “I worked really hard to get in the mental frame, I knew physically I was in the right frame, so I didn’t let it get to me too much. I’m just out there enjoying it and enjoying the process, and to do it on this course is amazing.”

Second for Learmonth ensured she finished with the overall Series silver, third for Taylor Brown maintaining her place on the all important end-of-campaign podium for the second year.

—
It was Learmonth who was once again in command in the water, pulling away from the very first strokes to spearhead an initial lead group of seven that included the ever-excellent Vittoria Lopes (BRA), Taylor Spivey (USA), Summer Rappaport(USA) and Sophie Coldwell (GBR).

Zaferes was 10 seconds back at the halfway re-entry, Flora Duffy 18 and Nicola Spirig (SUI) 30 seconds, and the gap to the front had almost doubled by the time the American was back out of the water and heading into transition for the first time, but in good company to work with to close in.

Duffy was up with Zaferes, Learmonth, Coldwell, Spivey and Lopes in no time, and the six worked themselves into a rhythm led by the Bermudian double-World Champion.

Another powerful cyclist was working her magic further back, home-crowd hero Spirig hauling a group that included the likes of Taylor Knibb (USA) and Vicky Holland (GBR) along with her. After 12km the gap was nearly 30 seconds and closing, and collectively they could have caused issues for Zaferes if they had bridged successfully.

Duffy had other ideas, though, and her power saw Taylor Spivey and Sophie Coldwell dropped, leaving five flying out front.

Again she took up the attack at the top of the hill on lap six and threatened to pull away. Though the door was shut again on Duffy’s latest hopes of success, the effort did mean that Spirig’s group was left trailing yet further behind, the deficit now in excess of a minute and looking increasingly unreachable.

The difference had shrunk again to 50 seconds by the time the athletes were into their shoes and out of T2, Rachel Klamerdonning the white headband and setting off with Laura Lindemann (GER) and Annamaria Mazzetti (ITA) in pursuit of the leaders.

It was Lopes who faded first from the front, the effort of the bike taking its toll, then Duffy slipped back with three laps to go, her lack of race time since returning from injury doing likewise.

That left Zaferes with 5km to go and the World title as good as guaranteed, the matter of the course of the Grand Final still to be decided by the overall Series podium.

There was nothing to call between the trio as the kilometres ticked away, but it was on the penultimate lap climb that Taylor Brown’s challenge for the gold came to an end. Zaferes and Learmonth pressed on, the Brit first to look like she had the freshness to take it home, before Zaferes clicked one final time in an unforgettable season. She kicked with 200m to go, taking the final turn and hitting the blue carpet suddenly with enough room to savour the moment that was now entirely hers.

“I can’t believe it,” said Jess Learmonth afterwards. “The swim went well, and then on the bike we worked really well together. I just got on the and thought everyone was with me, so I just got my head down and went for it, with the same tactics as Tokyo, but it was really hard. And then on the run I was trying to keep up with Katie but then at some point she went off and I couldn’t keep up. She did an amazing race.”

“Yes, that was hard, but I had a good swim and I am really happy,” said an exhausted Georgia Taylor Brown. “The bike was hard, really hard. The first lap I thought ‘I can’t do anymore of this’. I just hung in today. I couldn’t give anything but the run felt comfortable. I just couldn’t give anymore but i’m so happy for Jess, I was rooting for her to take the win. To get silver in the Series is incredible and I am happy to be standing on the podium beside her.”