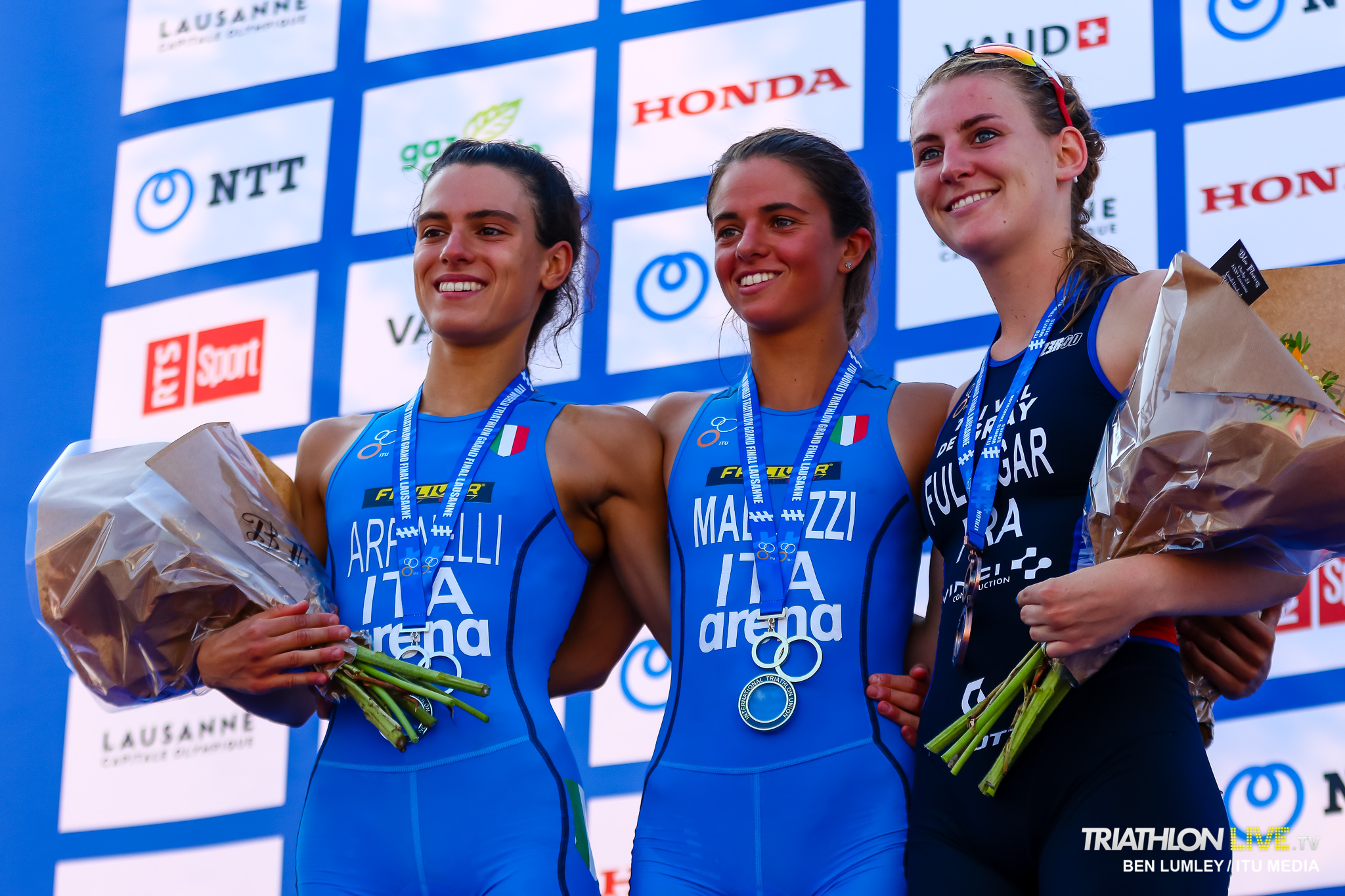 The female Junior athletes got the 2019 ITU Grand Finals Lausanne underway on Friday morning, and it was a huge performance from Italy’s Beatrice Mallozzi to bring home a World title to go with May’s European victory in Weert.

“This race meant so much to me,” said the Italian talent, who held her nerve to out sprint training partner Constanza Arpinelli to the line. “I had a good start to the run but in the second lap I had some problems with my stomach but I tried to focus and get to the finish for the win and I am very happy.” France’s Jessica Fullagar took the bronze.

—
Nerves were jangling as the athletes lined up for the 750m swim, a false start meaning they all had to be brought back to the pontoon and go through the pre-race motions once again. By the time they emerged from the water it was Gabriela Ribeiro (POR), Kira Gupta-Baltazar (CAN), Barbara de Koning (NED), Mercedes Romero (MEX) and Erin Wallace (GBR) who were all into transition together and out onto the bikes.

Two packs soon formed, Hong Kong’s Bailee Brown powering forward the 18 lead riders, Anja Weber (SUI) also looking to try and stretch things out at the front but with little success. Barbara De Koning had slipped back and was 15 seconds off the pace alongside Mallozzi, a 17-strong group a further 20 seconds behind them.

Over the four laps the chasers managed to eat into that gap, though, and at the bell the lead was down to a little over 20 seconds. Sophia Green, Hannah Knighton and Constanza Arpinelli were also flying at this point, but the opening stages of the run would prove telling.

From a front group of thirteen all in check out of T2, the contenders were soon whittled down on the first climb of two on the 5km run. France’s Jessica Fullager was pushing the early pace to see who could go with her, and it was only Hannah Knighton and the Italian pair of Arpinelli and Mallozzi who could keep the pace, Erin Wallace dropping back.

Knighton and Fullager had delivered incredible final bike laps to get to that point, and it looked to have taken its toll on the New Zealander as she began to fade on lap two. Then it was Arpinelli taking to the front with 500m to go, Mallozzi looking uncomfortable as she held her stomach, but it was after the final climb that Italy’s European Junior champion gritted her teeth to battle through the discomfort.

As Fullagar faded, it was between the Italian training partners, and Mallozzi underlined her status as a name to watch for the future with the power sprint at the end to punch the tape with joy.

“I am really happy with that race,” said Arpinelli, delighted with her silver. “I have never raced a World Championships and I really enjoyed it. We are teammates and we always train together so it’s a big deal to race together.”

“It was a really tough race and the course is hard but I am just so happy to come away with a medal,” said Fullagar. “There were five of us as soon as we left transition and then it went down to four and then to three with 1km to go. I knew the Italians were really strong runners. That last hill really killed me so I hung on as long as I could but they were really strong so well done to them.”

The Olympic City began to warm up in more ways than one as the Junior men took to the pontoon on the edge of Lake Geneva for Friday’s 2019 World Championships, and it would be Portugal’s Ricardo Batista who took the honours thanks to a lightening-fast run, holding off the challenge of Lorcan Redmond (AUS) in second, Spain’s Sergio Baxter Cabrera finishing with the bronze.

“This is really unbelievable,” said Batista before his achievement could truly sink in. “I have trained very hard and very long for this, since my first year as a Junior. I was worried on the bike course, because we had too many athletes in our group so I was just trying to stay safe and save some legs. And then out of T2 I felt really strong, and was able to drop many athletes. It was a really great race.”

The sun was beating down on the athletes as they got underway for the sprint-distance battle, and it was Alessio Crociani(ITA) out of the water first with South African Jamie Riddle and Great Britain’s Marcus Dey for company. Brock Hoel (CAN) was some 20 seconds back at this stage, Batista keeping in check just over 10 seconds away from the leaders as they got out and onto the four-lap bike.

Just ten athletes were together for much of that first loop but, driven by Andreas Carlsson (SWE), the chasers were soon on their tails, and by the end of lap one that group was 32-deep, all the while Radim Grebik (CZE) and home favourite Sasha Caterina (SUI) driving them forward from the front.

That sheer weight of numbers made progress difficult for the leaders with seemingly nobody willing to make a move, Travis Saunders (RSA) and Ernesto Gonzalez (CRC) among those able to benefit and pulling the next pack into the mix as more than forty athletes streamed into transition for the second time.

First to make their move on the run was Australian Joshua Ferris, Crociani right on his shoulder and Boris Pierre (FRA) also finding his rhythm, pulling to the front halfway through lap one.

Again the climbs would shuffle the pack, however, and it was Portugal’s Batista who began to seize control, moving into position behind the front runners and then passing them, Lorcan Redmond in pursuit. Spain’s Baxter had put in one of the fastest first laps to haul himself into contention as well, but having hung off the front pair for as long as he could, his challenge began to fade.

That left a two-man duel for the World title, and it was Batista who was able to find enough in the legs to leave Redmond with 300m to go, taking the tape by nearly 10 seconds, the Australian with silver, Baxter just able to hold off Boris Pierre to the bronze.

“It was a very tough ride,” said Redmond afterwards. “We had a lot of people in our group and we were all over the road, we were lucky to get through without any accidents. The run was crazy, it was rough, especially after such a hard bike course, but I have been training here and I knew what I was up to, so I just went for it. I am very happy with the silver medal, and Ricardo (Batista) had the legs no one else had today, so congratulations for him.

“This is truly amazing,” said Baxter, who has been training in Leeds at the Brownlee centre. “I didn’t expect to podium here but here I am with the bronze medal. I have been working really hard all year, I had a couple of injuries, but I feel really good now. Ricardo (Batista) made a pretty strong race, running really strong, and I couldn’t catch him. But I think that after the gold medal in the Duathlon in Pontevedra, it is truly amazing what I have been able to achieve this year.”