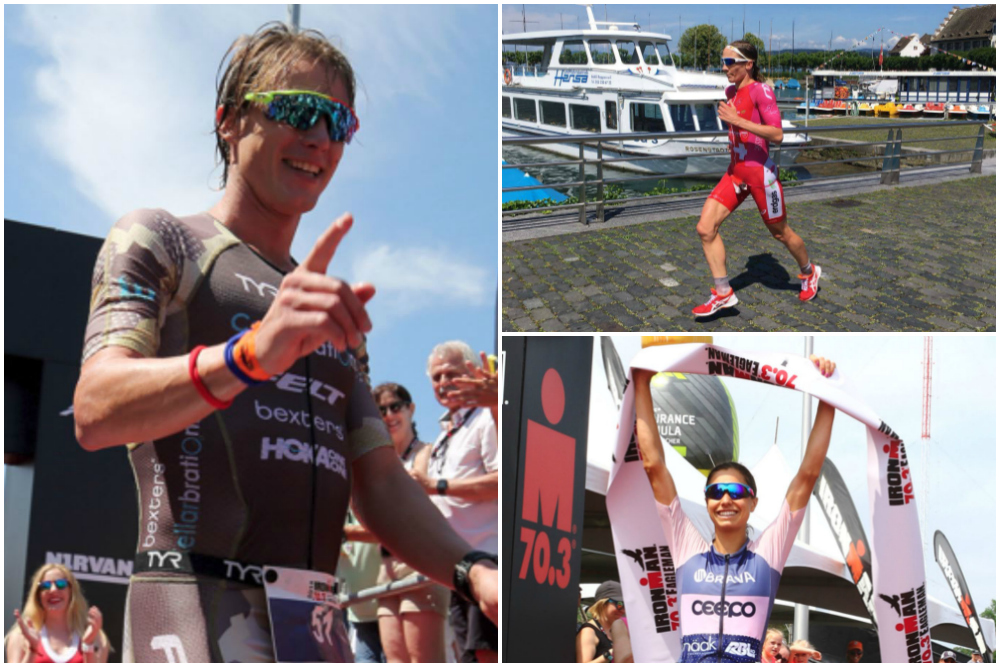 The “locals” showed up Sunday at IRONMAN Boulder and put on a show on what ended up being a hot, windy and all around very challenging day on a normally fast course. The men’s race had a small split in the swim that had Joe Gambles, Kevin Collington, and Justin Metzler with a gap on a chase group consisting of Peterson, Shearon, Long, and Chris Leiferman. By the rides end the heat, big winds, and fast riding of Chris Leiferman blew up the race and most riders ended up coming in one by one behind the leader Leiferman. Once onto the run course Leiferman was able to find his rhythm with only Gambles in the same zip code and eventually finishing minutes behind our champion. Patrick McKeon stormed the run course with the fastest run of the day to finish off the podium placings.

The women’s race had Dede Griesbauer setting the pace early out of the swim and onto the bike and never letting go. Angela Naeth worked her way up to Dede’s shoulder out of T2, but the effort was short lived and Griesbauer went straight back to the front of the race. There was no hiding from the fleet-footed Kirsty Jahn today, though and the Canadian took control of the race while cruising to the front and clocking the fastest split of the day. Katy Evans snuck by Dede for second, and finished just 3 minutes off the winner Jahn. Griesbauer held strong to find the last podium position in her hometown race after what was a long hard fight.

It doesn’t happen too often that a pro woman finishes in the top 10 overall, but this weekend in Rapperswil-Jona, Daniela Ryf ate up the men’s pro field with a stunning performance at IRONMAN 70.3 Switzerland. She stormed out a start-to-finish-victory again, taking her fifth win here in a row. The 31-year-old IRONMAN star is maybe in the best shape ever. Ryf embarked on a impressive journey right from the get-go including fantastic splits on the bike and run. The three-time back-to-back IRONMAN world champion hammered out the bike course in 2:13:03 and ran a 1:19:54 to almost finish sub-4 hours. Ryf’s 25-year old compatriot Imogen Simmonds had a great race from start to finish in runner-up position, too, but the women’s dominator was eventually 15 minutes gone.

Australia’s Josh Amberger celebrated a great start into his 2018 European tour after his runner-up finish at the IRONMAN African Championship in April. As Ryf did in the women’s race, the 29-year-old pushed the pace very early to open up a gap to his chasers. Amberger was able to drop most of them except Swiss Manuel Kueng. They exited the water as a duo, went through the whole bike course almost together, with Kueng coming off the bike only 30 seconds later than the Aussie leader. Amberger proved his mental strength on the hard run course, keeping not only Kueng away, but also some strong runners like 2014 winner Boris Stein and defending champion Ruedi Wild.

It is such a difference to bring the race home as a strong swimmer compared to a podium result. Elliot Smales knows how it feels racing from the front, but he knows as well how frustrating it is to get caught later. He ranked third last year in Staffordshire; this year his plan was clear: To keep the strong runners like Cyril Viennot from France off his heels. Once the fog had disappeared at Chasewater reservoir in the morning, the race started with a one-hour delay and a brilliant swim by Smales. He led the field into T1 with his fellow countryman Mark Buckingham behind and a big chase group at his neck, and he kept on breaking away from his chasers on the bike.

“It was a tough race, but I really enjoyed the course and the crowd support was amazing,” said Smales later. That was spoken after Smales had entered T2 less than a minute in front of Bryan Mccrystal with the strong group behind. It was said before he had to battle it out hard on the run again. Smales was a lucky man thanks to fact that he eventually finished with the smile of the day: While George Goodwin and McCrystal outsprinted for second place, his win was not in danger.

See also:  Interview: Rachel Joyce wants to be the next top brit in Kona

After three consecutive victories, Lucy Gossage tried her best to get into the mix in women’s race again. She biked her way into third place, but Fenella Langridge had already made the race extremely fast in the water. With the fastest swim split by far, Langridge put a lot of pressure on co-favorite Emma Pallant who started hammering on the bike. Nikki Bartlett was able to downsize her deficit after a weaker swim on the bike in great fashion to start into the run first with Pallant behind. But Pallant took over control early on the half marathon to nail the win.

Hunter Lussi (USA) enjoyed the limelight off the front after finishing the swim and bike legs with the lead. The attention came crashing to an end within the first two miles of the run when Cody Beals (CAN) went storming by the leader like he was standing still. Beals’ race-best run on the day rewarded the Canadian the victory by a winning margin of over six minutes.

Stephanie Roy (CAN) started the run seven minutes down to the leader and in seventh place overall. Roy proceeded to throw down the fastest run on the day by close to eight and a half minutes to celebrate the win with a 4:15:31 winning time.