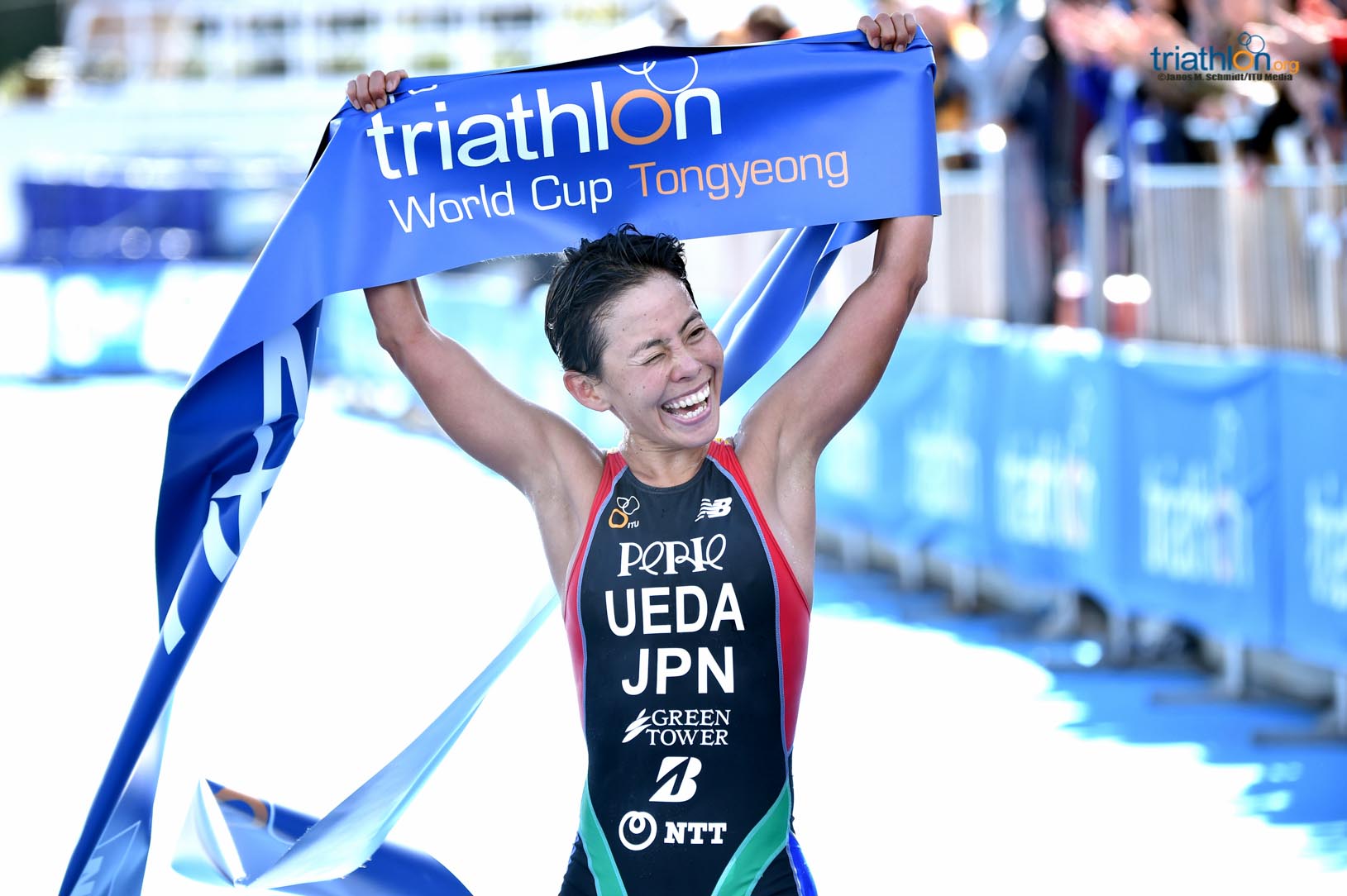 Australian Marcel Walkington, renowned for his robust swim stroke, led the elite men across the 750m swim course and into the first transition of the day.However it was Ireland’s Russell White who produced the fastest transition, which allowed him to lead out onto the 3-lap bike course.

In the initial stage of the bike course it was Frantisek Linduska (CZE), Vicente Herdandez (ESP), White, Eli Hemming (USA), Peter Denteneer (BEL) and Alessandro Fabian (ITA) who set the pace and established the lead group.

Within the final stages of the bike leg, Itamar Alster (ISR), Koki Yamamoto and Russia’s Dimitry Polyanskiy attempted to break away from the lead group.

Christophe De Keyser (BEL) made a near missed attempt to close in on the leaders but was unsuccessful and ended up riding solo between the two groups.

It wasn’t long before the chase group bridged the gap to rejoin the front riders. The mass group of strong elite men motored into transition together.

Seth Rider, from USA, lost no time in the switch and led out on the run within seconds of the mass frenzy of men.

With the likes of all the race favourites positioned well for battle and two rounds of the grinding hill remaining, it was going to come down to a furious running race.

With the motivation of a World Cup medal in sight, a surge was provoked by Alessandro, who charged up the tormenting hill.

Out on the final stages of the run course, Studer, Frenchman Felix Duchampt and Hemming triggered the pace which forced the Italian to relent.

The podium was established but placings still remained undetermined, as the men bolstered across the final kilometre of the run.

It came down to a bold sprint finish, with Swedish triathlete Studer pacing ahead of the Frenchman to dominate and be presented with his first World Cup victory.

“It was amazing. I was not expecting such a good race. I am really happy. I am on my way to Australia to spend my time with my coach over the Winter so it was amazing to come here. To finish on the first spot on the podium like this is amazing.

“I did not expect to be this far up. I knew when I came with the lead group on the run that I would put everything on the line and push as hard as I can. We had the perfect conservation with Felix Duchampt running in second. I know he’s a strong runner and we could push each other and lose the others on the last half lap.

“I knew if I was going to come down to a sprint on the finish line I would give it all and hope that I would come out first,” said Studer.

A slightly disappointed Duchampt was awarded with the silver medal.

“I can’t complain about a podium at the World Cup level, this is the third time in my life. I am happy but I can’t say I am 100% happy as I really came for the win. Mixed feelings, it’s always a good moment when you get on a World Cup podium,” Duchampt said.

Hemming crossed the line in third place to round out the elite men’s podium, content with his race result.

“I am happy with that, For the first part of the run I was holding on for dear life. Fabian (Alessandro) was pushing it pretty hard so I was just trying to stick with the pack and see if I could wait until the end for a little bit of a sprint.

“The two guys (Studer and Duchampt) got away and I spent the time trying to catch back up to them but couldn’t quite get there,” added Hemming.

Elite women’s race report
A mix of class and emerging talent took to the stage in the elite women’s race for the 2018 ITU Tongeong World Cup. 51 women lined up to contest, across a challenging sprint-distance course, for World Cup glory.

After the women completed the 750m swim in the harbour, Lotte Willms from the Netherlands, clocked the fastest swim in 9-minutes and 34-seconds, to lead the elite women into transition.

Kaidi Kivioka from Estonia produced the fastest transition and entered the bike course first with a trail of women riding behind her.

In the early stages of the bike course, a group was established and included all of the race favourites. Japan’s Ai Ueda, New Zealand’s Nicole Van Der Kaay, Hungary’s Zsofia Kovaks, America’s Renee Tomlin and Italy’s Annamaria Mazzettiwere placed comfortably in the combination.

Despite the challenging 3-lap bike course, nothing separated this group of women who entered the second race transition together.

The bid for glory was still up for grabs as the expected strong field of runners headed out to tackle the 5-kilometre run course, which included 2-laps of the notoriously sharp hill.

It wasn’t long before Ueda made her move, after the hill grind, and took control of lead position with her dominant run form.

No other women in the field today had the leg power to chase down or match the experienced Japanese triathlete, who was out in a league of her own.

Ueda, celebrated her 35th birthday yesterday, stormed across the finish line to win the race and was finally presented with the gold medal here at the ITU Tongyeong World Cup.

The Japanese triathlete was thrilled to step up onto the top of the podium after claiming consecutive silver medals here in Tongyeong in 2016 and 2017.

“This is the first time that I have got a top place on the podium in Tongyeong, I am so happy. Thank you to everyone, yesterday was my 35th birthday so this is a big present for me,” Ueda said.

Dodet produced an impressive overall race performance to be awarded with the silver medal.

“I am very happy about this. It was a really hard race on the bike and on the run. I tried to follow Ai Ueda but she’s a very strong runner,” Dodet said.

“It’s always a good day when you get on the podium and to be back racing.

“I tried to push the pace a bit. Those girls definitely kept us honest and had us chasing,” said Tomlin.

Visit the website to review the elite women’s results.