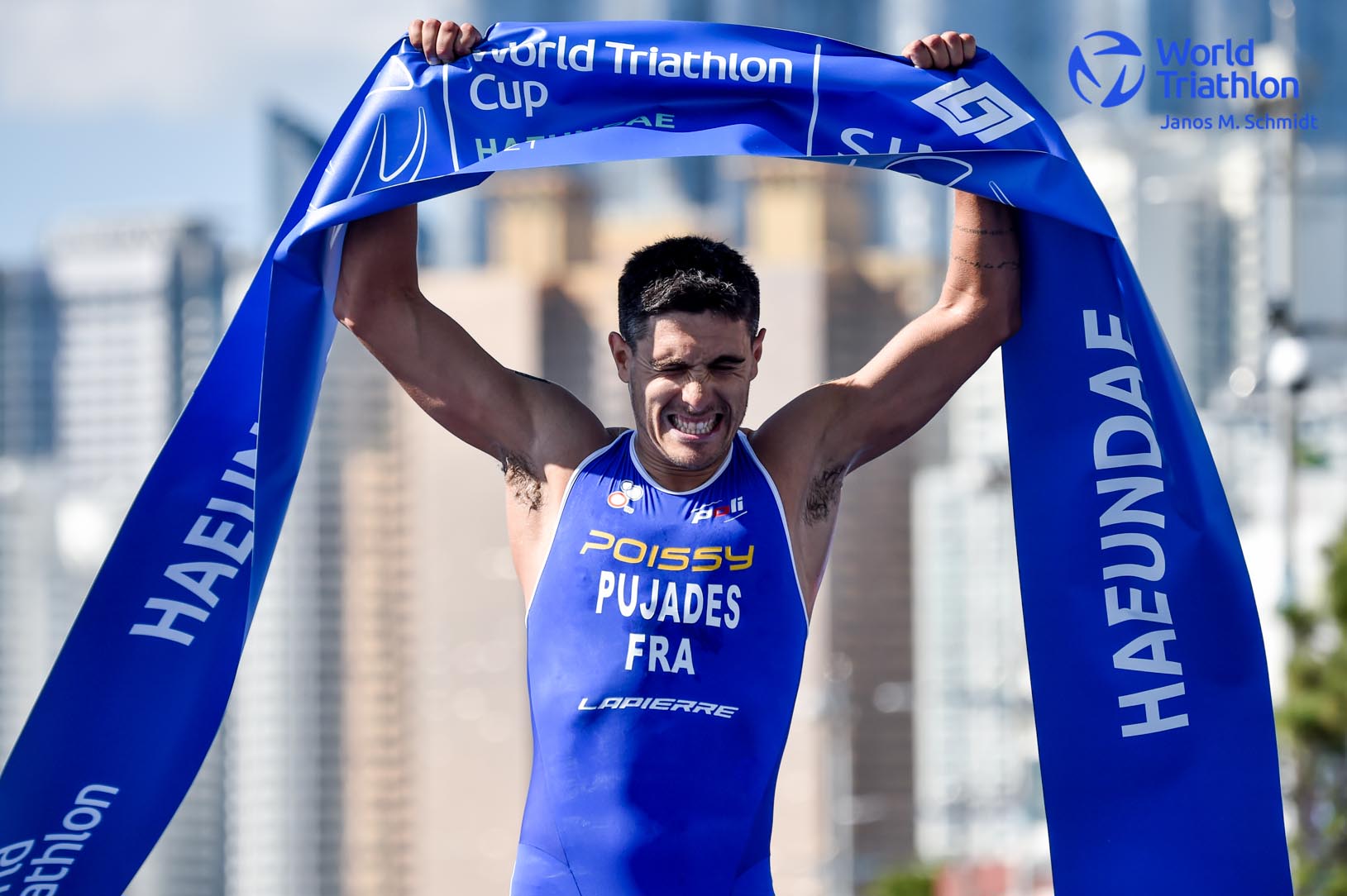 A strong field of 46 elite men lined up, on the white sand of Busan’s famous beach, for the inaugural World Triathlon Cup Haeundae, in favourable race conditions. The men’s race launched from Haeundae Beach at 1030AM KST, for the 750m ocean swim, where the water temperature was 21.5°C and the air temperature had risen slightly to 17°C, since the women’s race earlier, ensuring a non-wetsuit swim. Today’s sprint distance course featured a 5-lapped bike course (20km) and closed with a 4-lapped run segment (5km).

Italy’s Alessio Crociani was the first elite male out of the swim and into transition, to commence the opening lap of the bike course. A group of 10 elite men formed out in front, taking short turns and getting organisaed. The group, which included Crociani, Japan’s Takumi Hojo and Jumpei Furuya, Italy’s Nicola Azzano, Australia’s Max Stapley and Frenchman Anthony Pujades, was 24-seconds ahead of the chase group. The second group included pre-race favourite Romania’s Felix Duchampt and Italy’s Michele Sarzilla.

The front group of men worked together through the final lap of the bike segment and extended their lead by over 1-minute, all in a position to race for the medals, as they entered the final transition of the day.

Hojo, who has shown incredible run form in recent World Triathlon events, blasted out of transition with Pujades and Azzano on the hunt. All three athletes were fixed on being in medal contention. Crociani was moving in fourth position with Furuya in fifth. The three men in front built into their run which extended their lead, on the field, each lap.

At the halfway point of the run Purjades surged out in front with Hojo attempting to grip but the Frenchman had the strongest of the day. With an almighty stretch to the finish, Purjades claimed the gold medal in Haeundae!
“It was a crazy good finish for me and am so happy to do it. It’s been a while for me since I have raced in ITU (World Triathlon) races so yes, such a happy man now. It was a really nice race, I enjoyed it alot, so when is the next one now.”
“Most of the strategy was to save as much energy as I could until the run and then I tried to build my run, because it was four laps so it was quite easy to build it.”

“It was quite hard with the quarantine here but such a happy crew and everything was done well so that we could race, just thankful.”

Hojo produced an impressive performance in Busan to earn his first World Cup silver medal.
“I am so happy, I am on the podium, at a World Triathlon Cup, for the first time.”

In a sprint for third place, it was Italy’s Nicola Azzano who clutched the bronze medal in the inaugural World Triathlon Cup Haeundae.
“We exited the swim and we were in a group of 10. I thought ok, it’s a good group of strong bikers, Let’s go all out and see what could happen. It worked really well so I am really happy. I wanted to put a really good swim in today and that’s what I did, I wanted to go all out in the bike and breakaway and that’s what we did. I am really happy.”

The stunning coastline of Busan set the scene for the inaugural World Triathlon Cup off Haeundae Beach. The elite women’s race commenced racing proceedings at 0830AM (KST) while the men’s start was at 1030AM.
Great Britain’s Beth Potter dominated the women’s race to secure World Cup gold in Busan and Frenchman Anthony Pujades ran away with victory in the men’s race.

Elite women’s report
A spectacular sunrise was the opening scene for the inaugural World Triathlon Cup in South Korea. The water temperature was 21.3°C and air temperature measured at 15.4°C, for the start of the women’s race, ensuring a wetsuit swim was allowed. Race favourites Zsanett Bragmayer (HUN), Beth Potter (GBR) and Kate Waugh (GBR) led the 750m swim and were the first women’s in the first transition to commence the 20km (5-lapped) bike course. Bragmayer and Potter exited transition first and led through the first lap of the bike course.

By the second lap Waugh made contact with the top women and the trio rode together and continued to establish a sizeable gap on the rest of the field. Waugh looked fixed and comfortable, taking her turn at the front.
The chasing group of women featured a group of experienced of race specialists including Frenchwoman Sandra Dodet, Roksana Slupek (POL), Italy’s Bianca Seregni, Japan’s Niina Kishimoto, Australia’s Charlotte McShane and reigning Junior World Champion Beatrice Mallozzi of Italy.

With two laps left on the bike to negotiate, the breakaway trip, still Potter, Bragmayer and Waugh, had established a 30-secong gap on the chase group. By this stage, the chase pack had increased their advantage over the second pack, by 20-seconds.

On the final lap, the chasers were unable to bridge the gap and Potter, Bragmayer and Waugh cleared through transition together. Potter had an issue with her shoe in the second transition, which lost her some time. Bragmayer and Waugh were the first to enter the 5km foot race in Busan, over 4-laps.

See also:  How to Follow the 2016 Ironman World championship coverage

It was only a matter of time and Potter had reeled in Bragmayer and Waugh to lead the race. The Hungarian was showing signs of fatigue out on the final stage of the run and Great Britain’s Waugh was in contention for the silver medal.
Over the final few hundred metres of the run, Potter applied the pressure to extend her lead and runaway with victory in the first-ever World Triathlon Cup Haeundae. Potter was thrilled with her gold medal, despite a mishap with her show in her second transition.
“It wasn’t quite perfect out there. I lost my shoe in transition so I had a bit of work to do on the run but I was able to get back and I am happy with the performance. I am off to (World Triathlon Cup) Tongyeong to race next week and really looking forward to it.”

Training partner Waugh crossed the line and was delighted to be awarded the silver medal, her highest result on the World Triathlon stage to date.
“I am really pleased with my overall performance today. I love a beach start and I love diving through big waves so I was really excited because the swell was pretty big before we started. I had a really good swim and we managed to get a breakaway on the bike. The girls worked really well on the bike, we all knew were in podium position which really helped to push us on. I set off on the run, I nailed my transition for like the first time this year, so I was really pleased and just held on for second.”

“I knew Beth (Potter) would be coming in hot so I just tried to stick with her.”

“It’s no nice to race here. Korea is absolutely beautiful and I hope to be back.”

Bragmayer, who is known for her powerful swim and bike combination, hung tough to earn bronze in Busan.
“After Hamburg I tried to stay in shape as much as possible but my body and mind is really tired now. Today’s race was really tough and fun. We worked really well on the run, I really needed that breakaway on the run.”

“I didn’t expect that, I thought it would be a big group together but my swim was really good, it was just the two British girls coming with me so it was really good and helpful for me in the breakaway.”

Training - Getting the Job Done