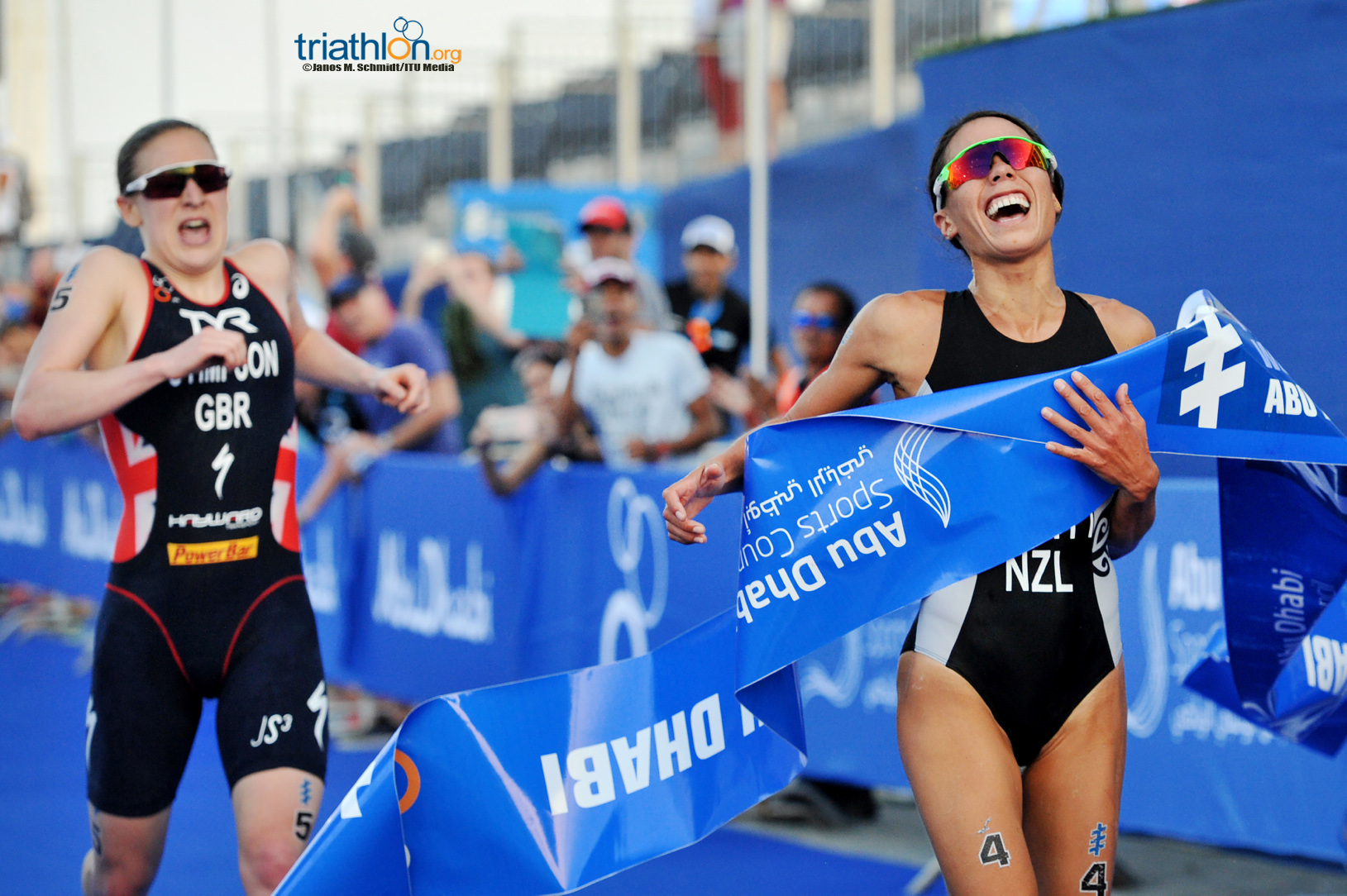 Hewitt’s win was a long time coming as her victory was dedicated to her beloved and talented fiancé, the late Laurent Vidal, who was honoured after his passing with the number one position in the same venue just one year ago. “It was an amazing race for me, it is amazing coming here to Abu Dhabi for me. Last year the number one spot was dedicated to Laurent and this year I am dedicating to Laurent. I raced two weeks ago, my race of this year in Tiga and I won. So I knew I was coming here really fit. Laurent always told me that I had everything, I had the dedication, I had the integrity, I had talent and he told me the one thing I was missing was emotion and I didn’t show it a lot of the time,” Hewitt said through tears. “I have to say thank you to Maddie Dillon, she has been beside me for one year and knows exactly what I am going through and my friends, my family I just want to thank everyone.”

Earning the silver medal was Great Britain’s Jodie Stimpson, who was edged out by Hewitt by just an inch in an epic sprint battle that came down to the wire. Third place went to Austria’s Sara Vilic, who stepped onto the WTS podium for the very first time.

“Coming on that straight, Andrea was the stronger one, I was stronger on the hills. To be honest, I’m just ecstatic me and Andrea got on the podium. The amount of work we did all day, if I was going to lose to a sprint finish, I’m glad it was Andrea today,” said Stimpson of her strong performance. “I can’t thank my family enough for getting me through that last year. That one was for my sister, she’s been my rock through this, and I couldn’t have done this without her.”

The women started with a two-lap swim, first tackling a long 900-metre lap before climbing onto the pontoon to dive into the water again for a shorter 600m swim. A small group of women used the first longer lap to gain a slight lead right off the bat. Spaniard Carolina Routier along with Summer Cook (USA), Katie Zaferes (USA) and Anastasia Abrosimova (RUS) paved the way in the water.

The group of four exited the swim for the first transition zone, while the entire field followed 20 seconds behind. It took only a couple of kilometres on the start of the bike for a lead pack to form. Stacked with Americans Zaferes, Cook, Sarah True and Kirsten Kasper, Aussie Gillian Backhouse and Italy’s Alice Betto joined forces with the US team. They opened up the tough and technical bike course, which wound around the F1 Yas Marina Circuit raceway.

Stimpson, who was 25 seconds down out of the swim, managed to bring the chase up to the leaders by the third of ten bike laps. Stimpson and Hewitt’s strength in the cycle was too much to handle for some of the women, with five women quickly dropping off for a 10-deep leader group.

As the leaders entered the second transition, it became clear right out of the gate who wnted a medal. Stimpson, Hewitt, Vilic and Klamer quickly bunched together, dropping the remaining women. Midway through the run, as the finish line drew nearer, Stimpson, Hewitt and Vilic made their move to power ahead. On the final lap, with the blue carpet in sight, Stimpson made a final push to break from her competitors. It looked like victory would be hers in Abu Dhabi for the second year, but in the final seconds, Hewitt came blowing by in an exciting sprint finish to just barely swipe the title away from Stimpson, giving Hewitt her first WTS win since 2011.

Stimpson then followed just an inch behind to earn the silver. It was Vilic who clung on to get the bronze, clenching her first-career WTS podium.

Vilic said, “I can’t believe it, it’s crazy. It’s such a nice feeling, I think I’m going to realize it tomorrow. I was training so hard and I’m so happy that it paid off now. I like those technical courses, so I guess it fits me.”