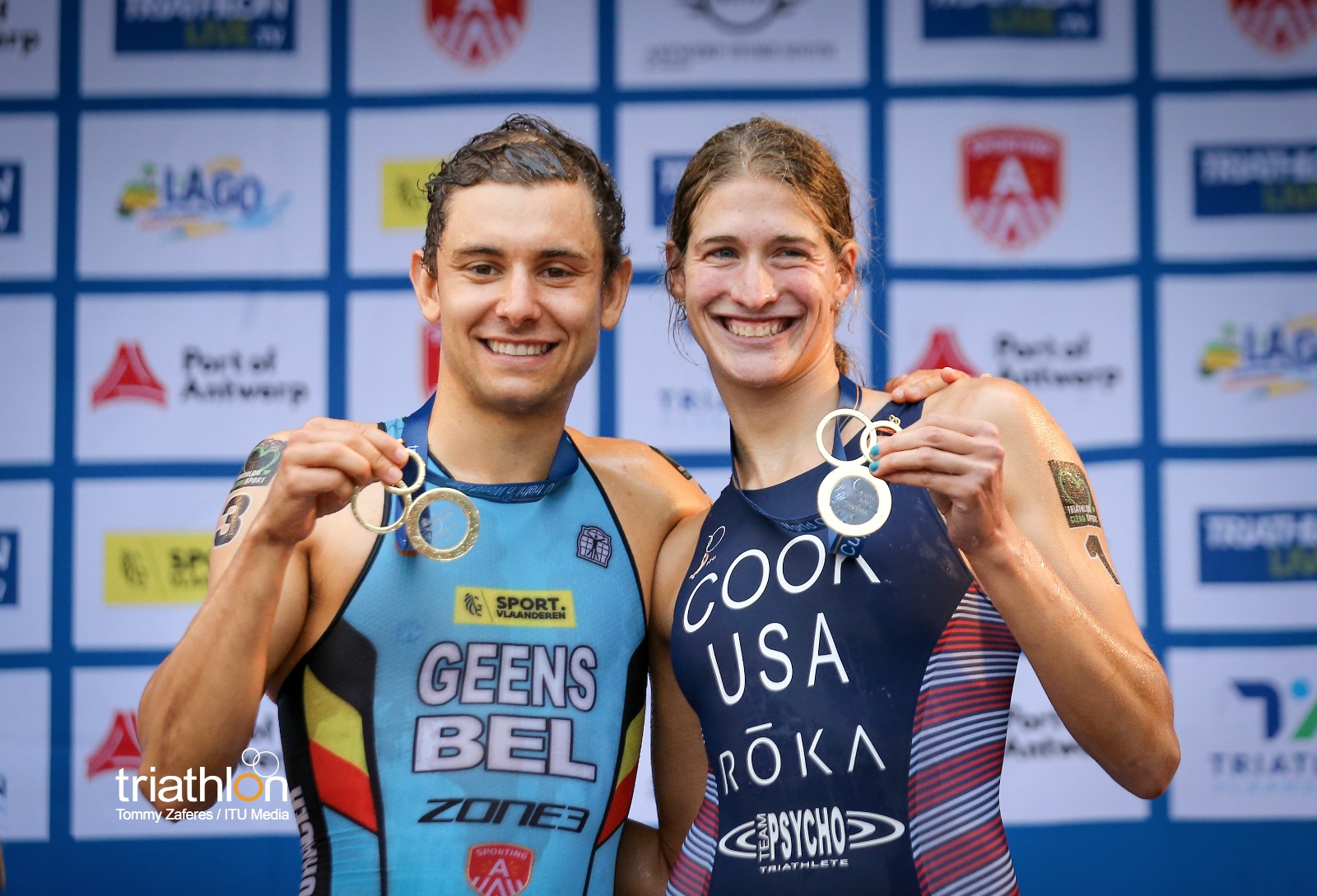 all images by Tommy Zaferes/ITU Media

Belgium had a great day of firsts at the 2018 ITU Antwerp World Cup, with Jelle Geens claiming the first ever victory of an ITU race on home soil to much delight of the thousands of spectators who enjoyed a day of triathlon at its best. He was accompanied in the podium by Kiwi Tayler Reid and Canadian Tyler Mislawchuk. On the women’s race, the victory was for one really used to be on top of the podium on world cups: USA’s Summer Cook, who claimed her sixth victory of her career. Behind her in the finish line were British Beth Potter and Italian Verena Steinhauser.

The local hero, Marten Van Riel, was one of the favourites before the start and he proved the thousands of spectators lining up in Antwerp right, being the first one to get out of the water. The Belgium, who had a splendid performance last weeks in WTS Leeds finishing in 5th place, was planning on leading since the beginning and he delivered.

Behind him, Jonas Schomburg (GER), one of the best swimmers in the field, and Tyler Mislawchuk (CAN), and the three of them tried to escape from the chasers from the first km of the bike course, but they were quickly trapped by a large group, forming a train that will stay together for the 22km of the bike.

It was then time for the men to line up to try to avoid problems with the corners, and work in turns, with some of them trying to scape but with no luck. First, it was the turn of Tyler Mislawchuk. A couple of kilometres later the Norwegian Casper Stornes gave it a try as well, and Matthew Sharpe (CAN), Tayler Reid (NZL) and Uxio Abuin Ares (ESP) also had their chance, but all of them with no luck.

So a large train of bikers arrived together to the second transition, and with all to be decided in the last 5km run, another Belgium, Jelle Geens, decided to go for it. He led a small group of ten athletes, including himself, Van Riel, Mislawchuk, Reid, Sharpe and Connor Doherty (IRL) among them.

In the last lap, five of them were still fighting for the podium positions so it all came to one of the longest sprint ever seen, with Jeens giving all he had for the final push. Cheered by the local fans, he managed to stay one meter ahead of Reid and crossed the finish line in first, claiming his first ever victory in a World Cup. “I really feel amazing”, he said after his win. “In the sprint I thought I didn’t have anything lef, but when I was 1 meter behind I heard the crowd cheer, so that gave me the extra strength for the final push”. “This was a really hard race, but also a really honest course, but it was also a very nervous race, with plenty of attacks. For me, to get my first World Cup victory in front of my friends and family, here in Belgium, is just amazing”.

For Reid, Antwerp was the second World Cup podium after grabbing silver in Karlovy Vary last year, while Mislawchuk, finishing in third, is also a newcomer to World Cup podiums, after finishing fourth in WTS Yokohama a month ago. “I thought I could run past Jelle in the last meters, but I had nothing left for the final push, so congrats to him. I learned my lesson last week in Leeds so I saved some energy for the run, and I’m very happy to be in the podium today”, said Reid.

“I am stoked with my third place here in Antwerp, I just didn’t have more legs for the last 200 meters”, said Mislawchuk. “I love the cobblestones, I’m a very technical rider so I actually decided to come here becuase the course looked like it suited me perfect, so I’m really happy with my result here”.

Another Belgium, Van Riel claimed the fourth place, while Canadian Matt Sharpe finished in 5th place. And the best running leg of the day was for one of the rising stars of British triathlon, Alex Yee, who stock the clock on 14:50 for the 5km run.

Women’s Review
The race started with Lucy Hall (GBR) and Tamara Gorman (USA) setting a frantic pace since the first strokes on the Bonaparte Dock. Behind them, another two extraordinary swimmers: Summer Cook (USA) and Valerie Barthelemy (BEL), cheered by the local crowds who gathered under the MAS Museum to enjoy a delightful afternoon of triathlon at its best.

The four of them were joined by Natalie Van Coevorden out of transition and tried to ride solo for the first kilometres of the bike course, but the technical corners and the cobblestones proved too much for them to stay by themselves, and they were quickly chased by a group of another 7 riders. Among them, some other strong names, including Amelie Kretz (CAN), Verena Steinhauser or Kyleigh Spearing (USA).

They worked together to stay away of the chasers, lining up to manage the multiple 90 degrees turns and all the cobblestones, and trying to stay away from trouble and saving some legs for the run the leading group build up a lead of 27 seconds by the end of the 22 km bike ride.

And it was the American Cook, who stayed in the back of the bike group for most of the laps, who stroke first right out of the last transition. Without looking back not even once, she started to break away in the first kilometre, with Natalie Van Coevorden and Verena Steinhauser being the only ones able to follow her, but with Cook’s lead getting bigger and bigger.

The American managed also easily the cobblestones in the run course to come to the finish line all smiles ready to grab the sixth world cup of her career.  “This is a really tough bike course, and biking is my weakness, so I came here to challenge myself. After a rather dissapointing race in Leeds last keek I needed to change something, and this is a great result”, said the American. “I pushed myself out of the confort zone and it provved succesful”, she said.

Behind her, the surprise of the day was for British former track and field athlete, Beth Potter, who was able to cross the line in second place after flying over Steinhauser and Van Coevorden in the last kilometres. Potter, who represented Great Britain in the Rio 2016 Olympics in the 10,000 meters, had the fastest split in the last segment on her third appearance in the World Cup circuit.  “I feel so happy with this race. I had three targets for this race, and I accomplished the three of them. I can’t be happier with my performance”, said the British.

The third place was decided on a sprint over the finish line, with Italian Steinhauser managing to pass France’s Dodet in the last 50 meters to claim the first World Cup podium of her career. “I am so happy”, she said. “The course was extremely hard and I thought I couldn’t do it, but I managed to find some strength at the end and I was able to pass Sandra”.

The French, who won the first World Cup of her career in Astana only three weeks ago, claimed the fourth place, and just behind her the Aussie Van Coevorden. The first local in the finish line was Claire Michel, in 7th.