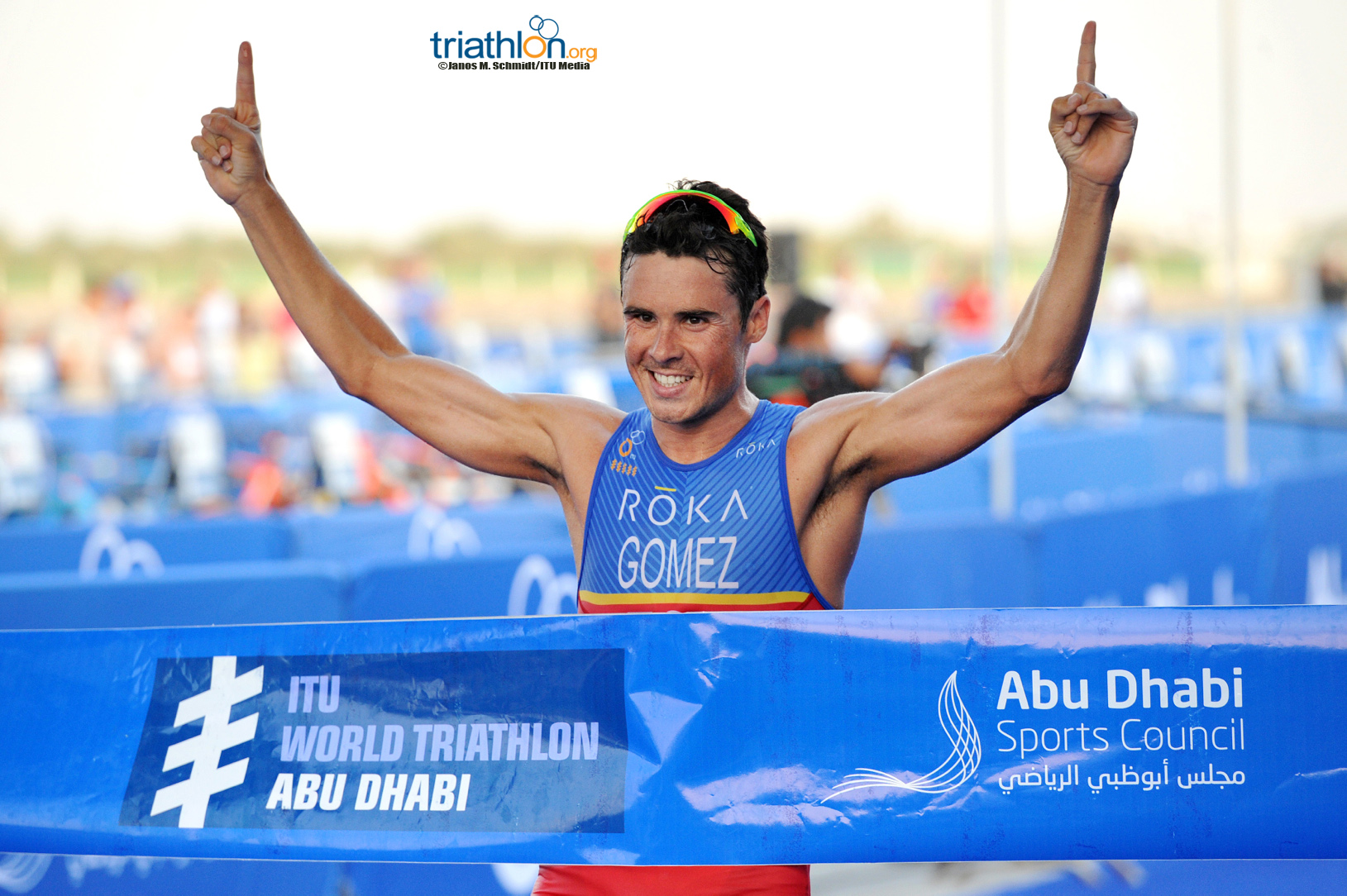 In the 2017 ITU World Triathlon Series season opener in Abu Dhabi, Spaniard Javier Gomez Noya returned to competition with his 13th career WTS win after almost a year break from the Series.

The five-time ITU World Champion debuted stronger than ever, celebrating his 50th WTS race with the fastest time of the day.

“It is great to come back this way. I still had a few mistakes in the race, I did not swim very well and had a bad T2. But I knew that is was going to be a very tough run, and with Tom Bishop it was very technical. On the third lap we slowed down a lot, just trying to save energy for the last lap and I made my move with about three kilometres to go and I won, so it worked well. So, I am very happy to be back this way,” said Gomez. Great Britain’s Tom Bishop claimed the silver medal, his first WTS medal of his career and becoming the sixth man in Great Britain’s history to ever do so. The bronze went to France’s Vincent Luis, who made a comeback appearance today after not having raced the WTS circuit for nearly 15 months.

Bishop said of his performance, “I can’t believe it to be honest. I had a plan, I wanted to swim as best as I could, save as much energy on the bike. I wasn’t really sure how it was going to go because it was the first race of the season. I had a feeling that it might all come together when I found myself in the front group and there was a gap so I knew I had to work as hard as I could.”

The race was split early on, with a longer 900m swim loop helping to break up the bunch. Aurelien Raphael (FRA), Pierre Le Corre (FRA), Henri Schoeman (RSA) and Igor Polyanskiy (RUS) exited first, some top names such as Mario Mola (ESP) and Richard Murray (RSA) struggled in the second half of the field.

While not the fastest athletes in the water, Gomez and Luis were positioned perfectly only about 10 seconds behind.

The leading men made a swift break through the first transition and onto the bike, taking the first several laps to form a strong working group. By the third lap, a group of 10 men which included Gomez, Polyanskiy, Schoeman, Luis, Bishop Andrea Salvisberg (SUI), Marco Van Der Stel (BEL), Ben Kanute (USA), Leo Bergere (FRA), and Greg BIlllington (USA) finally put the hammer down, regularly maintaining 45 seconds over the chase.

Mola, Murray and Spaniard Fernando Alarza took turns leading the chase, but their gap only increased lap after lap. Heading into the second transition, the chase had over a minute to make up on the run.

Despite a slow second transition, Gomez quickly became the front-runner on the first lap. Schoeman, Luis and Bishop gunned it down the pavement alongside Gomez early in the four-lap run course. When Gomez tried to break off, only Bishop stuck with him stride for stride.

Although Bishop kicked ahead of the five-time World Champion, Gomez hit his stride as the bell rung out on the final lap. From there it was only a matter of keeping the pace, Gomez sailed ahead to the finish line for lucky number 13 WTS win. The bell lap looked to drain Bishop of his energy, but the Brit managed to hold on for held on for second place. After a year plagued with injuries, Luis steadily ran his way to bronze.

Luis said, “It is awesome because I am back after 15 months outside of the WTS and it has been months since my last triathlon, so it is good. I have some nerve problems so that has taken me out a lot. But it is good to be back on the WTS, it is good to see Gomez back and see him winning again and I am just really happy to be back on the podium again.”