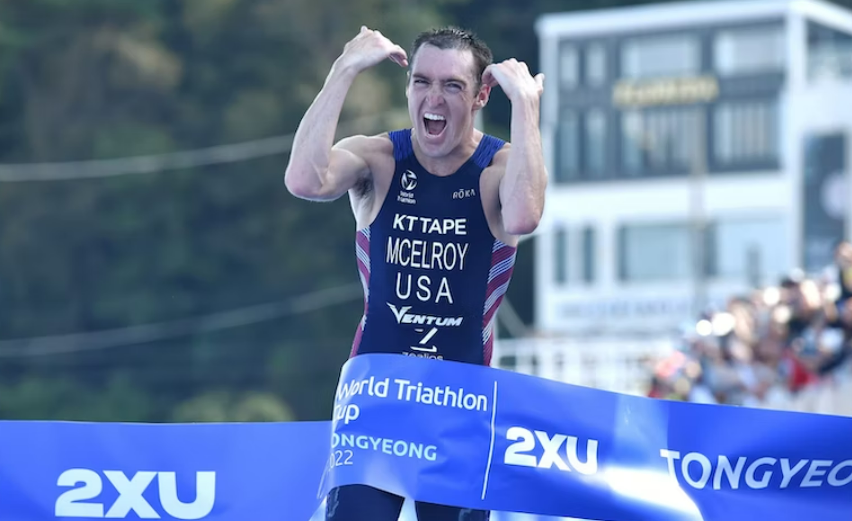 Conditions were idyllic for the next edition of the 2022 World Cup season in Tongyeong, South Korea, as the top triathletes in the world lined up to race in the standard-distance format. The field consisted of 49 women and 65 men contesting for medals and race glory on the world stage. The Korean World Cup commenced with a 1.5km swim in the Tongyeong harbour which transitioned to a 6-lap bike course for 40km before finishing with 4-laps of the 2.5km run portion of the race. Tongyeong boasts a challenging and hilly course that tests athletes on the bike and the run.

In the women’s race Audrey Merle (FRA) put an incredible amount of time on the field to run away with her first World Cup victory. 2022 World Triathlon Cup Huatulco champion Annika Koch (GER) made her move at the halfway point of the run to earn the silver medal. A brilliant race set-up by Mathilde Gautier saw the Frenchwoman claim bronze and on her first-ever World Cup podium.

In the men’s race Matthew McElroy (USA) timed his surge to perfection to run down the field and take the tape in Tongyeong. Hungary’s Gábor Faldum crossed the line to earn a hard-fought silver and Great Britain’s Samuel Dickinson stormed across the line with a bronze.

Men’s race report
65 men lined up in Tongyeong to contest in the third last World Cup of 2022. The field was stacked with a mix of experienced athletes and youthful talent ready to do battle over the standard-distance race format.

The Elite men launched into action, off the pontoon and into the 1.5km harbour swim. Frenchman Nathan Lessmann of France led the men through the two-lap open-water swim and into the first transition of the day.

On the fourth lap of the challenging bike course in South Korea, with a mix of ascents and descents, Willis, Batista and Furuya put in a major effort to break away from the group. The leading trio established a powerful 1-minute advantage over the massive group of elite men chasing and the race was set to come down to a mighty running race, around the coastal city of Tongyeong.

Through the final transition, Furuya and Willis who were stride for stride and Batista was moving in third. Dart showed incredible talent across the day however showed signs that he surged too early o the run course and was pushed back into the congestion of the men’s field.

It wasn’t long before McElroy and Faldom, the highest-ranked athletes in today’s race, ran down the field and moved into the top spots. McElroy put in an immense surge to close the gap on Willis. Faldum moved swiftly into second.

McElroy showed no signs of weakness across the final kilometres of today’s World Cup and motored down the chute to clutch the finish tape and claim victory, once again, in Tongyeong.

“I feel good. This is my second time winning this race. We’ve been on a bit of a World Cup podium streak so I think it’s time I do a WTCS and see if it translates.

“Today, that was a tough race. I played it pretty smart on the bike. The swim was quite the battle, I haven’t been in a swim like that, when it was that physical, in a long time.

“It turned out to be a running race. I just sat on Gabor Faldum and waiting to make my big move,” said McElroy.

An emotional Faldum came across the line in second to earn a well-deserved silver medal.

“I am very happy because yesterday I checked my social website and there was a memory, 7 years ago was my last podium. I played with the thought that maybe I can do the same as 7 years ago and I did exactly and I am happy, really happy for this result,” said Faldum.

On the final stage of the run Great Britain’s Samuel Dickinson found the motivation to chase down the final spot on the podium and was awarded the bronze medal.

“The bike was tactical but at the start it was quite strung out, we had quite a good working pack but it was a little bit too big, couple of missed turns and that means that the chase could get back in it.

“A big shout out to Jack Wills who had an outstanding race. The run is tough as it’s dead flat and fast before the hill. Bottom of the hill, just go flat out until the line and somehow I held onto third,” Dickinson said.

Willis, who did a great deal of work on the bike and run in Tongyeong today, finished the race in seventh position.