The was plenty on the line at today’s Challenge Peguera-Mallorca, with not only the prestige of the win but also the tussle for points to decide the US$125k Challenge Family Pro Athlete World Bonus on everyone’s minds. In the end it was Jonathan Wayaffe and Imogen Simmonds who took the wins, with one surprising the crowds more than the other!

There were near perfect conditions in the swim with Matteo Montanari (ITA) leading out the water but it was Tom Bishop (GBR) who quickly took the lead on the bike and setting a blistering pace in a group that featured Montanari, Lukas Kocar (CZE), Jørgen Gündersen (NOR), Thomas Ott (GER), Rico Bogen (GER) and Marcel Bolbat (GER). Behind them was another group of 10 athletes which included Wayaffe and Andrea Pizzeghella (ITA) but they were never able to make the connection with the lead group which was always out of sight. Towards the end of the first lap Bishop, Kocar, Bogen and Bolbat had broken away and then the group splintered again, Kocar and Bogen dropping the others in the closing stage of the bike. Bogen did his best to drop Kocar but the pair entered T2 together with Kocar setting off to take an early lead on the run. Bogen quickly faded and Bishop took second with Bolbat in third and so it seemed that would be the podium. However, having got off the bike in sixth, Wayaffe (BEL) had been making his way up the field. Only his second middle distance race after a successful short course career, including the Belgian national title, Wayaffe sighted Kocar and Bishop in the last 3km and that was all he needed. He put the foot down to take the surprise win in 3:53:37, surprising everyone in the stadium who had seen Kocar leading for all the previous laps! Pizzeghella ran up into second in 3:54:07 and Bishop rounded out the podium in third in 3:54:23. 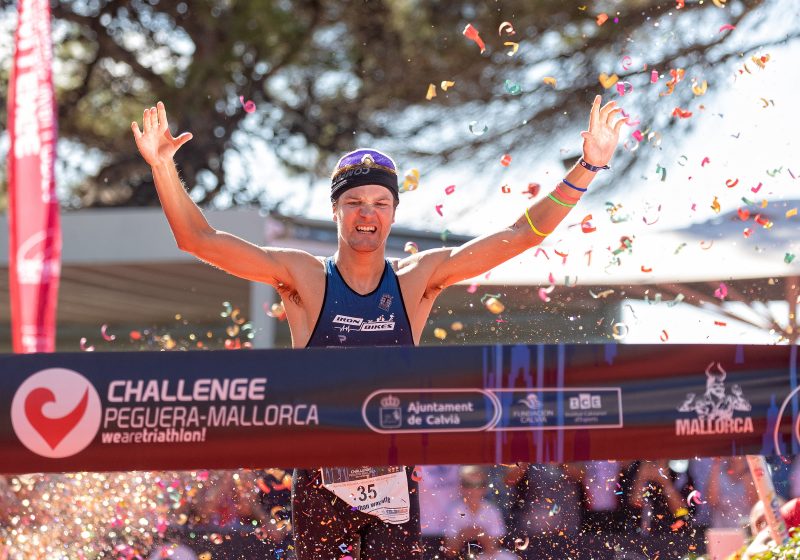 “I started running in sixth of seventh, about four minutes down and I knew what I was capable on the run,” said Wayaffe. “I immediately left the others that I came off the bike with and while I had a good pace, I never imaged I could catch the guys in front. Sometimes I felt cramps but they eased off and then I could go full gas again. Then on the last lap I saw the two leaders and I couldn’t believe it and the motivation rose very high! There was just 2km to go and I just didn’t expect it!” 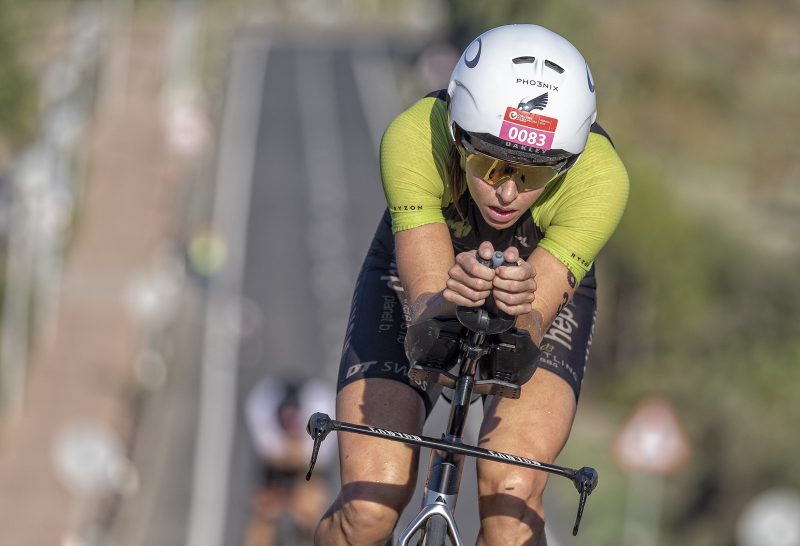 The women’s race had no surprises in the swim with Sara Perez Sala (ESP) leading out with Fenella Langridge (GBR) hot on her heels while Simmonds (SUI) was about half a minute down in third. Langridge was fresh off the plane from her sixth place at Kona and racing not only for a result in Mallorca but also to defend her lead in the Challenge Family Pro Athlete Bonus. By the first major climb, Langridge had taken the lead with Perez Sala just seconds behind and the chasing Simmonds and Carolin Pohle (GER) a minute down. At almost the same time Langridge put the hammer down to drop Perez Sala while behind Simmonds did the same to Pohle. It wasn’t long before Simmonds rode into second and then ultimately into first looking hard to beat. And that’s where she stayed for the rest of the day with her lead never challenged for the second lap of the bike, nor the run, taking the win in 4:20:58. Simmonds’ team mate, Anne Reischmann (GER) came off the bike in fourth behind and Langridge. Having had a mixed year marred by a couple of DNFs and a bout of Covid, this was an important race for her and she well and truly proved she was back with the fastest run split of the day to take second place in 4:25:24. Langridge held on to take third in 4:26:11 and in doing so, earning enough points to secure her World Bonus lead.

“It was a very tough day, it was pretty warm and I basically had a solo day out there which was pretty cool as you can just go as you want with a bit of pressure from behind in the form of my team mate Anne!” said Simmonds.

The points Lucy Byram (GBR) received for fourth place catapulted her up from sixth to third and into the money for the World Bonus.

Full results can be found here.