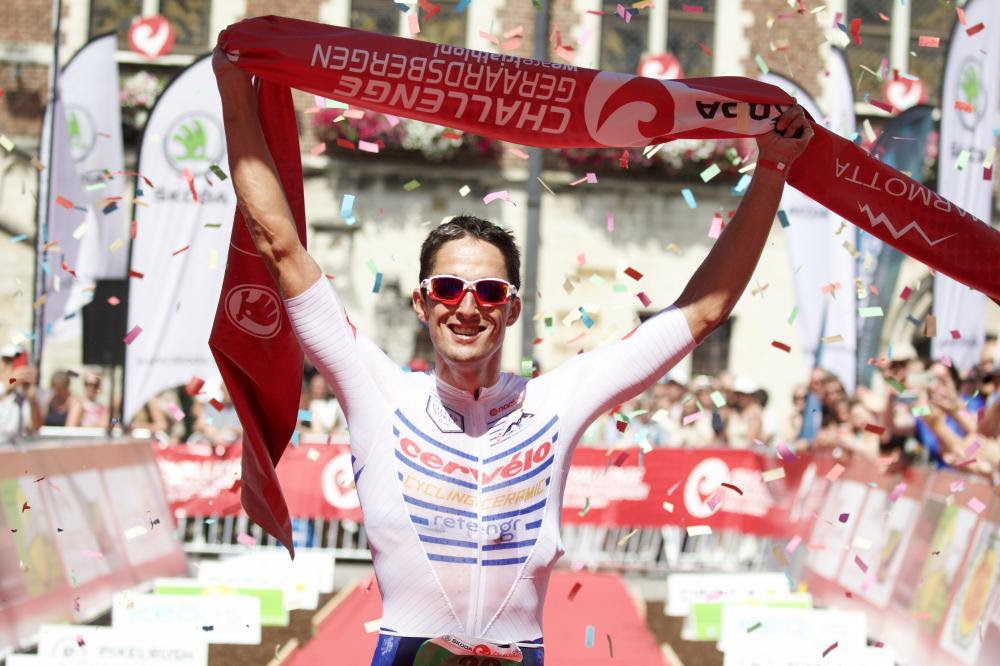 Antony Costes (FRA) and Diede Diederiks (NED) showed today it would take more than the infamous Le Muur to beat them as they took victory at Skoda Challenge Geraardsbergen today in 3:57:42 and 4:27:53 respectively.

In the men’s race, Pamphiel Pareyn (BEL) exited the water first in 22:39, but it was Heemeryck who was first out of T1 before a fumble with his shoes saw Pareyn retake the lead. It took a couple of kilometres for him to get back to the front but from that point on Heemeryck dominated the bike, seemingly back in his happy place as he powered up the hills of the technical Belgian course, including not one but two ascents of Le Muur, a 1km 7.8% average gradient climb on cobblestones. It seemed he had a comfortable lead until the final kilometres when the chase group, including Milan Brons (NED) swallowed up Pareyn and Marcel Bolbat (DEU) who had been sitting in second and third, spitting them out the back and closing down Heemeryck’s two minute plus lead to less than 10 seconds in the final kilometre. Brons then overtook Heemeryck just before T2, delivering a big mental blow to Heemeryck. However, Heemeryck was not going to give Brons the satisfaction of running in front and the two were soon side by side. However, behind them danger was lurking with Costes sitting comfortably 10 seconds back as they fought it out between the two of them. Costes struck on the first major hill, Heemeryck managed to hold on but Brons was out, unable to maintain the contact. The next kilometres were neck and neck until the final 5km when Costes made his move, taking the win in 3:54:45 with Heemeryck finishing just behind in 3:55:58. Brons hung onto third by the skin of his teeth, crossing the line in 3:57:42 just five seconds ahead of Pareyn!

“From the start in the swim it was a hectic race, the pace was very high,” said Costes. “With the heat I knew there was going to be some trouble for some at the end of the race so I tried to save some energy but it was very difficult because the Muur, it was all out whatever you do just to get to the top! You don’t feel the effort during the climb as there is so much energy and screaming but afterwards, you struggle to recover! It was a nice battle with Pieter on the run and on the second uphill I managed to put in some time and keep the gas on to the finish. I really loved it!”

In the women’s race, Margie Santimaria (ITA) took an early lead, exiting the water first and holding off attempts from Jenny Jendryschik (DEU) and Diederiks early in the bike. After leading up Le Muur, Santimaria finally ran out of steam and conceded the lead to Jendryschick who in turn was overtaken by Diederiks who increased her lead to 1:55 by the time she reached T2. She continued to put time into the Jendryschick throughout the run, taking a comfortable win in 4:27:53. Meanwhile, the battle for second and third was taking place with Alexandra Tondeur (BEL) overtaking Santimaria early in the run to take third place. But she had higher goals and in the final kilometres, also overtook Jendryschik to take second in 4:32:33. Jendryschik rounded out the podium in third in 4:35:01.

“It was a really tough day,” said Diederiks. “And it seemed like sort of an Xterra as there were some off-road parts in the run and of course the cobblestones on the Muur and a lot of climbing so it was harder than I thought. But it was a great race. I chose this race as I’ve wanted to race here for three years and it’s great to win!”