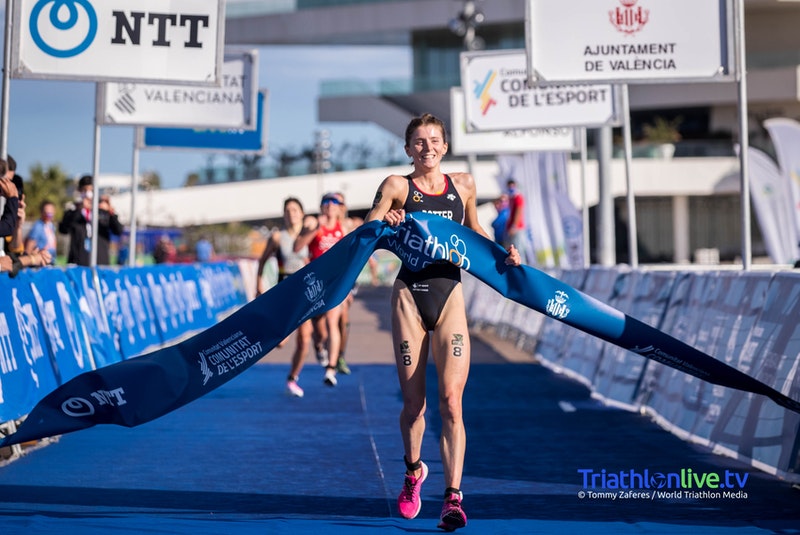 Under heavy showers, 32 women lined up in the Valencia Port for the last event of the 2020 season, with Brazil’s Ddjenyfer Arnold taking the lead from the first strokes in the calm waters that saw the America’s Cup boats navigated a few years ago.

With only a 750m swim ahead, Arnold led the way the whole segment, with the strong Portuguese squad of Gabriela Ribeiro, Melanie Santos, Vera Vilaca and Helena Carvalho right on her feet. Sara Perez Sala (ESP), Natalie Van Coevorden (AUS) and Beth Potter (GBR) managed to enter transition only 8 seconds behind the leaders, turning their heads back while going up the ramp to quickly realize that one of the favourites, Nicola Spirig, didn’t had her best swim and was far behind.

The group tried, with the help of Verena Steinhauser (ITA) and Beatrize Mallozzi (TA) quickly organized itself into a leading pack on first meters, but with not much fortune. By the end of the first lap of 5km, Spirig had managed to catch up with the leading group and led a large train of over 20 athletes for most part of the 20km bike ride.

The Swiss, one of the strongest riders on the field, knew that when it comes to leg power, very few can challenge her, but all her efforts to try to break away were in vain, and the large group entered the second transition all together when the last drops of rain faded away.

And it was when it all came down to the run when Potter showed that she was the one to beat. Coming from the back of the bike pack, she was quickly leading the group of seven athletes marching in front, alongside with Spirig, Lisa Tersch, Luisa Baptista (BRA), Santos (POR) and Steinhauser and Mallozzi.

With only one lap to go and without time references when passing through transition, Potter kept pushing hard and dropping athletes from the leading group. First was Santos, then the two Italians followed and half way through the run, Potter added an extra gear and no one could follow.

The British, who finished second in Arzachena World Cup this year, proved that her 15.24 personal best over 5km run a couple of months ago was not a surprise result, and left behind Spirig to grab her first ever World Cup victory. “To end the season on two highs, I am really happy,” said after crossing the finish line. “I was quite nervous. I wanted to come off on a high, I am glad I could go one better than Arzachena. I came off towards the back of the pack and when I felt like I could make that move on the run, I just went for it,” she explained.

Only a few seconds behind her, the drama of a sprint finish for the battle for second and third ended up with the Swiss, double Olympic medallist, showing her class and proving that even on first international race after an injury, Spirig can never be counted off the favourites for a race.

“I am really happy. I always try to give it all. Today I think I gave a really good race. I wasn’t quite there in the swim, I tried to make the ride hard for the other girls and I had a really good run. I think the tactics went well on the bike, I just wanted to have a good hit out and I go home really happy”, said Spirig.

And extremely happy Lisa Tersch (GER) managed to grab the last podium spot after a magnificent run. “It was amazing. I have never sprinted that much in my life. I am very very happy,” she said. “I kept thinking that I didn’t want to finish in fourth place, and I delivered”, she said.

The bittersweet fourth place was for Baptista, with Mallozzi closing the top five with a tremendous display after her Junior World Championships title two years ago.