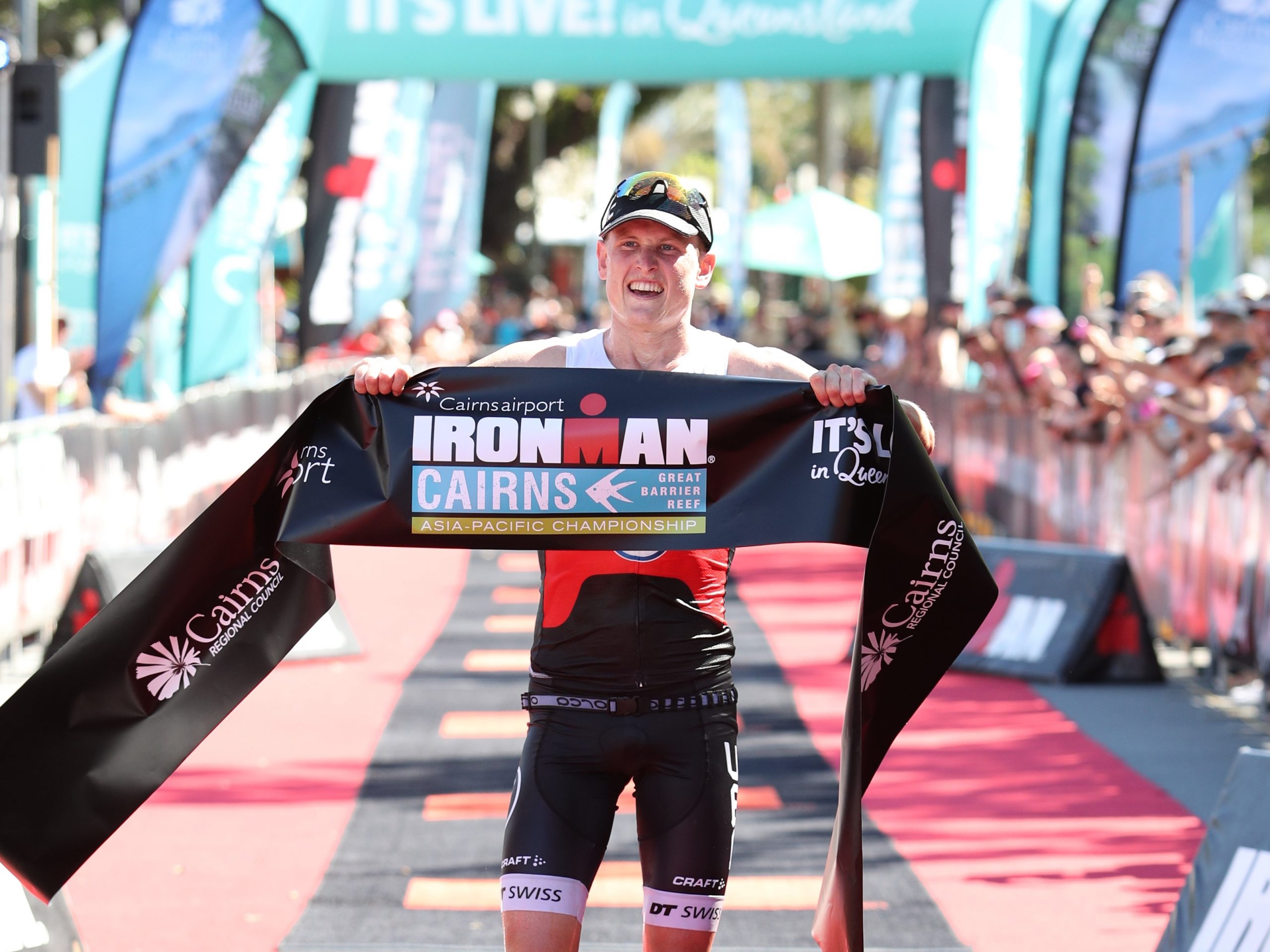 Max Neumann and Amelia Watkinson (New Zealand) have claimed their maiden IRONMAN victories at the Cairns Airport IRONMAN Cairns Asia-Pacific Championship, with Neumann winning on his IRONMAN debut and Watkinson in just her second race.

Neumann finished just under three minutes ahead of Tim Van Berkel who pushed hard throughout the final stages of the run to close the gap with 2017 IRONMAN Cairns champion Josh Amberger coming home in third.

“It feels special of course, I spent five months preparing for this one race, I didn’t come here to come fifth,” said Neumann. “I felt pretty good all day, except for a couple of patches on the bike when I ran out of water and I felt my mouth start to go dry. As soon as I got some more water on board I felt better. You’ve just got to get used to this type of racing, it’s a completely different ballgame. You don’t really go that hard, it’s more like an aerobic pace and I think my body likes that and hopefully I have a good future in this kind of racing.

“I knew Amberger would swim really well and I was happy that I had a good swim. Amberger went out ahead on the bike at about 100km and we had no idea what his time gap was,” he said. “I didn’t really push the bike too hard, just sat in as I had no idea about this type of racing. I felt pretty good at about 170km, tested my legs a little bit, but I came back to the group and sat in and jumped off the bike and felt incredible. I actually felt unreal that whole run.”

Neumann was towards the front of the pack all day, finishing the swim leg just a second behind Amberger, with the gap then opening up to a minute and a half by the end of the 180km ride. Amberger led the way through the first half of the run, before Neumann made his move and pushed on towards victory. Van Berkel spent the majority of the run leg in third, making his way past Amberger with around 10km left to go.

Watkinson crossed the line in Cairns less than a minute and a half ahead of Queensland’s Sarah Crowley, with Renee Kiley coming home in third.

“I wasn’t expecting that to be honest,” said Watkinson. “Our coach sent out a bulk email and explained to us that there were three or four races going on today, everyone had their own little races that they were targeting and within that it implicated all of the others.

“To be honest I actually spent the day moving as fast as I was because Renee was chasing, my incentive wasn’t to catch Sarah that was just a result of not letting Renee catch me. It’s really, really cool how we can push each other that hard and that’s what we come out here for,” she said. “I guess I just qualified for Kona. This has always been a goal of mine, I have a poster of a family friend up on my wall since I started the sport. I kind of secretly didn’t think I’d go but it’s always been on the bucket list, I guess I’m almost there now and I’ve got a year to do some really good prep.”

Watkinson, who won IRONMAN 70.3 Sunshine Coast just two weeks ago, was first back onto the beach at Palm Cove, ahead of Crowley and Kiley, with the three then swapping positions a number of times throughout the 180km ride.

Crowley pushed ahead in the second half of the bike leg, opening up an almost five minute lead, but that was then wiped out as she had to serve a five minute penalty before she could enter transition for drafting in the first 7km of the ride.

Watkinson led onto the run course, with Crowley retaking the lead within the first kilometre. From there Crowley opened up a two and a half minute gap by the 20km mark, before Watkinson began eating into that, then moving into first place in the closing stages of the race.

The Benefits of the Treadmill