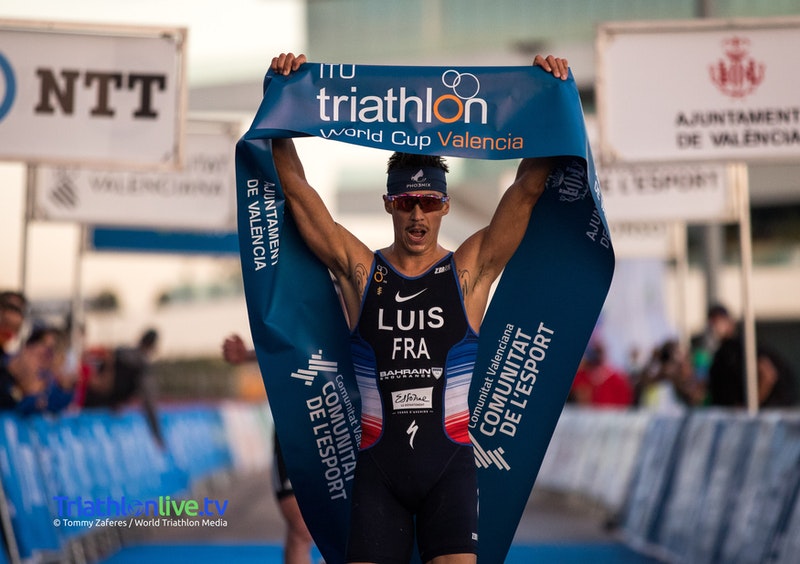 our out of four for Frenchman Vincent Luis, who sprinted out in the last meters double Olympic gold medallist Alistar Brownlee (GBR) to claim the last victory of the World Triathlon season, while Belgian Jelle Geens crossed the finish line in third place.

Luis has been able to hit the front from the first strokes of the swim since the return to racing, and 2020 Valencia ITU World Cup was not any different, this time with three other great swimmers right on his heels: Alistair Brownlee (GBR), Henri Schoeman (RSA) and Pierre LeCorre (FRA). The three of them managed to get a bit of a break out of the water and into the long way to transition, and were on the bikes a few seconds before the rest of the athletes was trying to get out of their wetsuits.

Behind them, the Norwegian”army” –Kristian Blummenfelt, Gustav Iden and Endre Espedal– organised themselves quickly to get the peloton moving and led the large chasing group, with the likes of Geens, Roberto Sanchez Mantecon  (ESP) and Alessandro Fabian (ITA) working with the group to try to control the leading group. But the flat course in Valencia, along what was an urban Formula 1 circuit, worked in favor of the leaders, that left behind Schoeman with two laps to go and managed to stay in front despite the solid efforts of the chasers.

By the end of the 20km bike ride the three leaders had almost half a minute over the large pack, and when it looked like the medals were going to be decided among the three of them, Geens came out of T2 on a chasing mission. Meanwhile, the older Brownlee and Luis went shoulder to shoulder, with Luis constantly in front and Alistair keeping up with the pace, that no one else was able to follow. They both run together until the last meters, with Luis proving that he is unbeatable this season crossing the finish line in first place to grab the fourth consecutive win.

“Four races so far and four wins and this one was the hardest I have to say, Alistair was pretty strong. He was the strongest of us in the front of the bike. I just managed to tactically get him but he could have won this race I think. A few more races under his belt, he could have won for sure,” said the Frenchman. “It was a pretty hard ride and that is what Alistair wanted, to make it hard for us so we run a bit slower. On the run, I just took the lead and not really try to think. I knew Jelle was really close and I just ran all out for the run.”

The British was extremely happy with his second place. “I feel like I am in my second career at the moment and I am just doing it because I enjoy doing it. It’s been a long project, two years ago I was pretty close to retiring to be honest. Slowly but surely I have picked my races, got fitter and enjoyed it more. Today I was back racing with the best in the world again,” he said. “I think if I had another race in a few weeks’ time I would be really close. I’ve just got to keep the consistency through the next few months and hopefully I can come out next year and be even a little bit better.”

Behind them, the Belgian went full gas and managed to catch LeCorre halfway through the run segment, but the French never gave up and stayed with Geens on the chase of the leading group. With only a few eters to go, Geens sprinted to grab the second third place of the season, after his podium in Karlovy Vary. “Off the bike I saw it wasn’t a big gap, I just had to go full and go for the win. You know Vince always has a sprint and Alistair is, well just Alistair so I am happy with third place.It was quite a good season, didn’t get a win but we keep that for next year.”

See also:  Tri-Factor is back with First Race in Vung Tau, Vietnam

Behind LeCorre, Antonio Serrat Seoane showed once again a magnificent run form to run from the back of the bike group to complete the top five of the day.