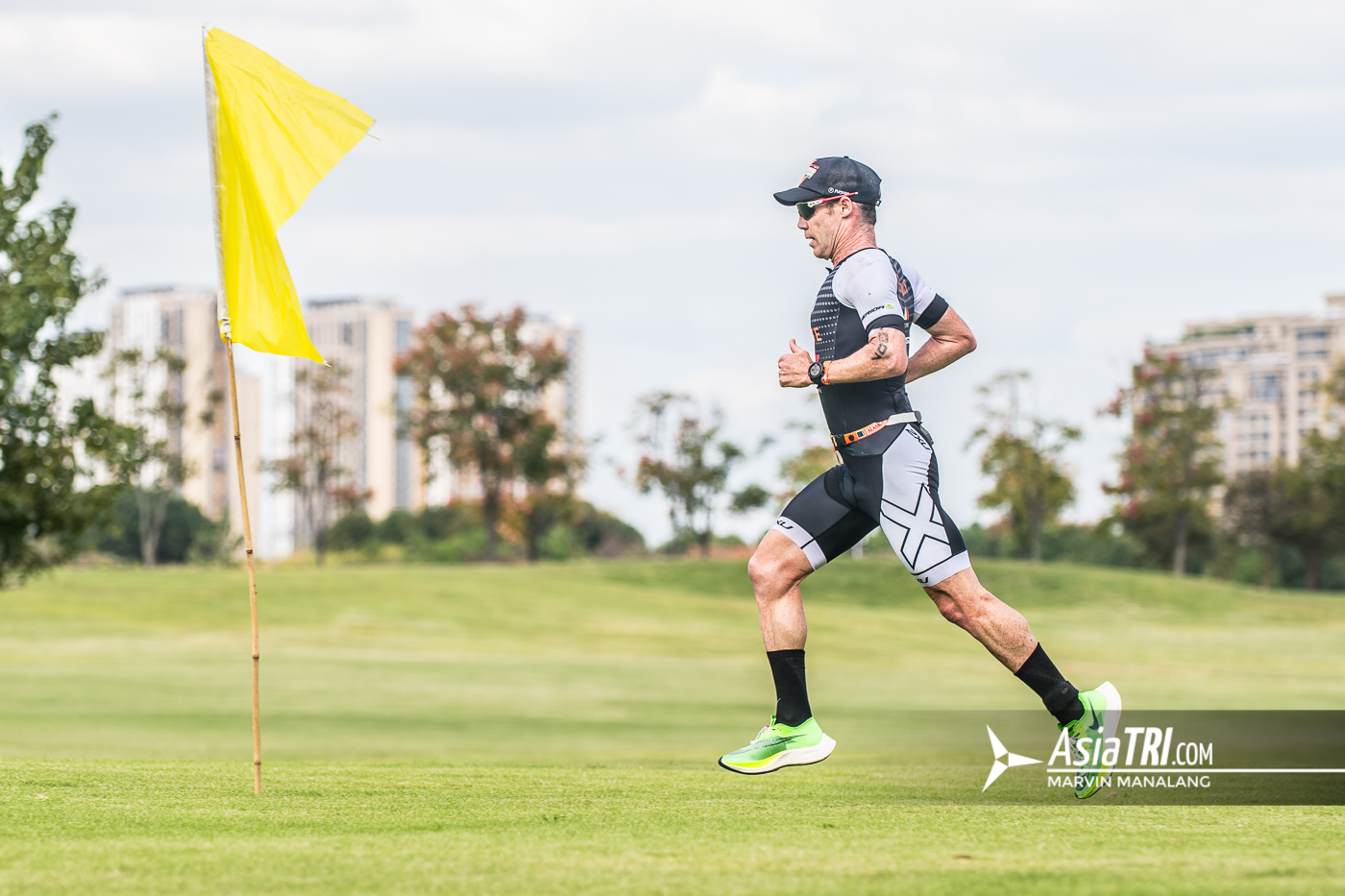 QUZHOU, China 22 Sep – A day after the All Blacks opened their Rugby World Cup campaign with a victory over South Africa, 12-time New Zealand Ironman champion Cameron Brown, who performed the Haka at the pre-race press conference, clinched a comfortable win at the inaugural TRI-Factor (TF) World Championship 2019 in Quzhou China.

In front of thousands of excited Chinese supporters, crowd favourite Brown won the TF Enduro (Elite) triathlon of 1.5km swim, 80km cycle and 20km run in 3:25:40 to take home RMB 10,000. The 47-year-old exited the swim 55 seconds behind Irishman Colin O’Shea, but caught O’Shea early in the cycling leg and never looked back. O’Shea (3:41:40) eventually finished 16minutes behind Brown, while Rondina Leonard (3:45:40) of the Philippines was a further four minutes back in third position.

“The city of Quzhou really got behind the race and the atmosphere on the entire race course was amazing,” said Brown who also won TF Quzhou in 2017.  “The marshalls and volunteers were fantastic and I’m not surprised that the race was sold-out. More and more people are learning about this race and will want to come to visit Quzhou. The start-finish line is pretty special and it’s not every day you get to finish in front of an ancient city-gate as magnificient as Shui Ting Men. I really enjoy the mountains and scenary here and I’ll definitely come back here and try for a three-peat.”

See also:  How To Ride On The Rollers On Your Bike | Indoor Cycle Training Made Easy

Chinese Taipei teenager Zhang Jiahao meanwhile showed why he is one of the rising talents in Asian triathlon by crushing the competition in the Standard Distance Men’s Elite. Zhang led from start to finish to win in a time of 1:58:26 while TRI-Factor Indonesia winner Ronald Setiawan (2:03:33) and American Micheal Cassinides (2:06:4) had to settle for second and third.

The TF Enduro Elite women’s title went to South Korean Hwang Jiho (4:16:29), while Malaysian Irene Chong (2:20:12) edged out China’s Yu Zhujin (2:20:39) for the Standard Distance Elite women’s crown. TF brand ambassador and professional entertainer Adda Emmanuelle Maria Therese surprised many by finishing third in the Standard Distance Elite Women category and then proceeded to get athletes, volunteers and spectators singing and dancing with her when she performed the TF theme song Being Alive

“I wrote this original song for all triathletes to let them know that I understand what they go through and to inspire more to pick up the sport,”  said Marie Therese, 29, who only picked up triathlon last year.  “The race course here at Quzhou is really enjoyable and I cut my personal best time by several minutes. The scenery is spectacular, the weather is great, but what I love most about Quzhou is the warmth of the people. This race should be on the bucket list of every triathlete.“

Held in perfect race conditions, the TF World Championship started and end at the iconic ShuiTing Gate which is part of the ancient city of Quzhou. The prefecture level city is one of the “top ten livable city in China” for two consecutive two years and is ranked fourth on the list of “China’s Happiest City”.

See also:  AsiaTRI and Challenge Taiwan partners up and are offering 50USD OFF discount to our readers

Elvin Ting, Managing Director of Orange Room Pte Ltd said, “Besides offering an iconic race venue here at Shui Ting Gate right next to the Qu River in the ancient part of the city, Quzhou really has much to offer in terms of natural attractions, food and culture.  Through this race, we also hope to attract more triathletes and visitors to beautiful Quzhou. We also  hope more in China will join the TRI-Factor Family and become part of our sporty, fun-loving and welcoming community of triathletes.”

Created in 2009, TRI-Factor was created to foster an inclusive and welcoming triathlon community. Now in its 11th year, TRI-Factor offers more than 20 race formats and distances across Asia for participants with varying skill levels and race experience.