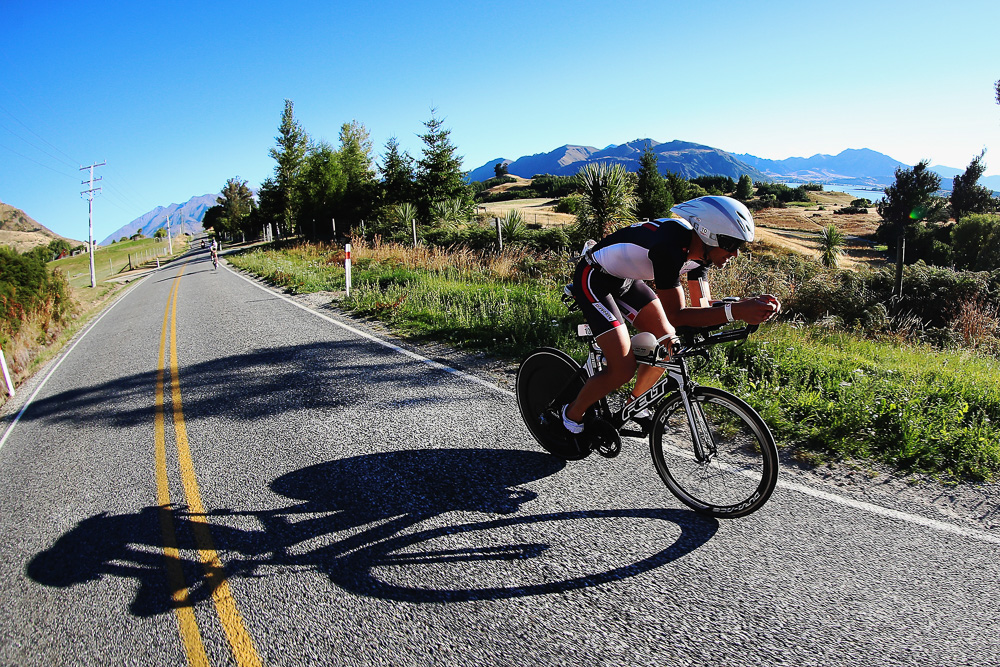 Dylan McNeice of Christchurch and Whanganui resident Gina Crawford today extended their phenomenal record at Challenge Wanaka by scoring their third and sixth victories respectively at what is regarded as the world’s most scenic long distance triathlon.
McNeice became the first man to three-peat at the iconic race set amongst New Zealand’s stunning Southern Alps with a time of 8:37:14 while Crawford has still only been beaten once on her former home course, finishing in 9:31:51.
In perfectly warm and still conditions, neither athlete was led after the early morning swim start. The men’s race was much closer than 2014 with Wanaka’s Dougal Allan second (+2:51) and Courtney Ogden (Perth, AUS) third (+12:32). The 42-year old Ogden prevented a Kiwi clean sweep by beating Auckland’s Carl Read into fourth by exactly one minute.
Last year, McNeice was never less than six minutes ahead after 50km of the bike leg but this year he was pushed all the way by a record pro men’s field, especially the impressive Allan. McNeice completed the 3.8km swim in a new course record of 45:33, taking nearly a minute off his 2014 time, but Allan rode a sensational bike leg of 4:30:50, smashing Richard Ussher’s 2010 record by almost twelve minutes. This after he came out of the water in 42nd place overall.
Commentator, Mark Watson joked with the top two after the race: “The world is screwed if Dougal Allan can learn how to swim!”
McNeice was quick to agree: “It was a lot harder than last year. Dougal rode so well and I honestly thought he was going to catch me. He pushed me and I ran that first lap [on the run] too hard. I really felt it in the last 15km but I think that got me the title so it was worth the risk.”
“Everyone out there was amazing – it felt like there were a lot more people on the whole course,” he said.
Gina Crawford was totally dominant in the women’s race despite facing a record number of pro athletes. Exiting the swim in 50:55 among a group of pro men, she maintained a lead of between five and seven minutes during the 180km bike leg and completed the marathon run 11:55 ahead of Laura Siddall (GBR) and 20:25 ahead of Michelle Bremer, originally from Mount Maunganui now living in Sydney.
Siddall made her mark in only her second long distance triathlon after turning pro last year. Wanaka’s German pro, Simone Maier has been a consistent performer in recent years and finished today’s race just off the podium in fourth.
Crawford was delighted to return to the top of the podium after finishing second last year to Candice Hammond.
“It’s always a tough race here but the crowds are fantastic. It pushes you to the finish so thanks to everyone for your support. I find it difficult leading, I really love chasing when it’s easier to keep focused and motivated. When you’re out front you don’t know what’s happening behind you,” she said.
“I had a pretty smooth day. I was happy with everything and didn’t have any low patches at all. Recovery is now my focus before racing in two week’s time. It’s just nice to have this good result – it’s always really special to win here in Wanaka.”
In the Lake Wanaka Half, Craig Savage from Christchurch took the men’s title in 4:22:48 with Auckland’s Hannah Wells winning the women’s race in 4:57:33. Both athletes raced in the 18-24 category proving the future is bright for New Zealand triathlon.
It was a good day for Coast to Coast athletes with Braden Currie fifth in Challenge Wanaka and Jess Simson second in the Lake Wanaka Half just a week after both claimed victories in the famous multisport race. Challenge Wanaka course record holder and Coast to Coast race director, Richard Ussher was third man in the Lake Wanaka Half.
Challenge Wanaka is the longest running Challenge Family event outside of Challenge Roth and in 2016 will celebrate its 10th anniversary. The Challenge Family series of triathlons features 44 full and half distance races in 19 countries around the world, including the world’s largest long distance triathlon – Challenge Roth in Germany. The birthplace of the Challenge Family, Challenge Roth now features over 5,500 athletes and 220,000 spectators and home to both world records held by Andreas Raelert (GER) and Chrissie Wellington (GBR). Since 2002, races throughout Europe, UK, Australasia, Asia, North America and South America have joined Roth.
Follow us

Challenge Wanaka: Best shots from the most scenic race worldwide