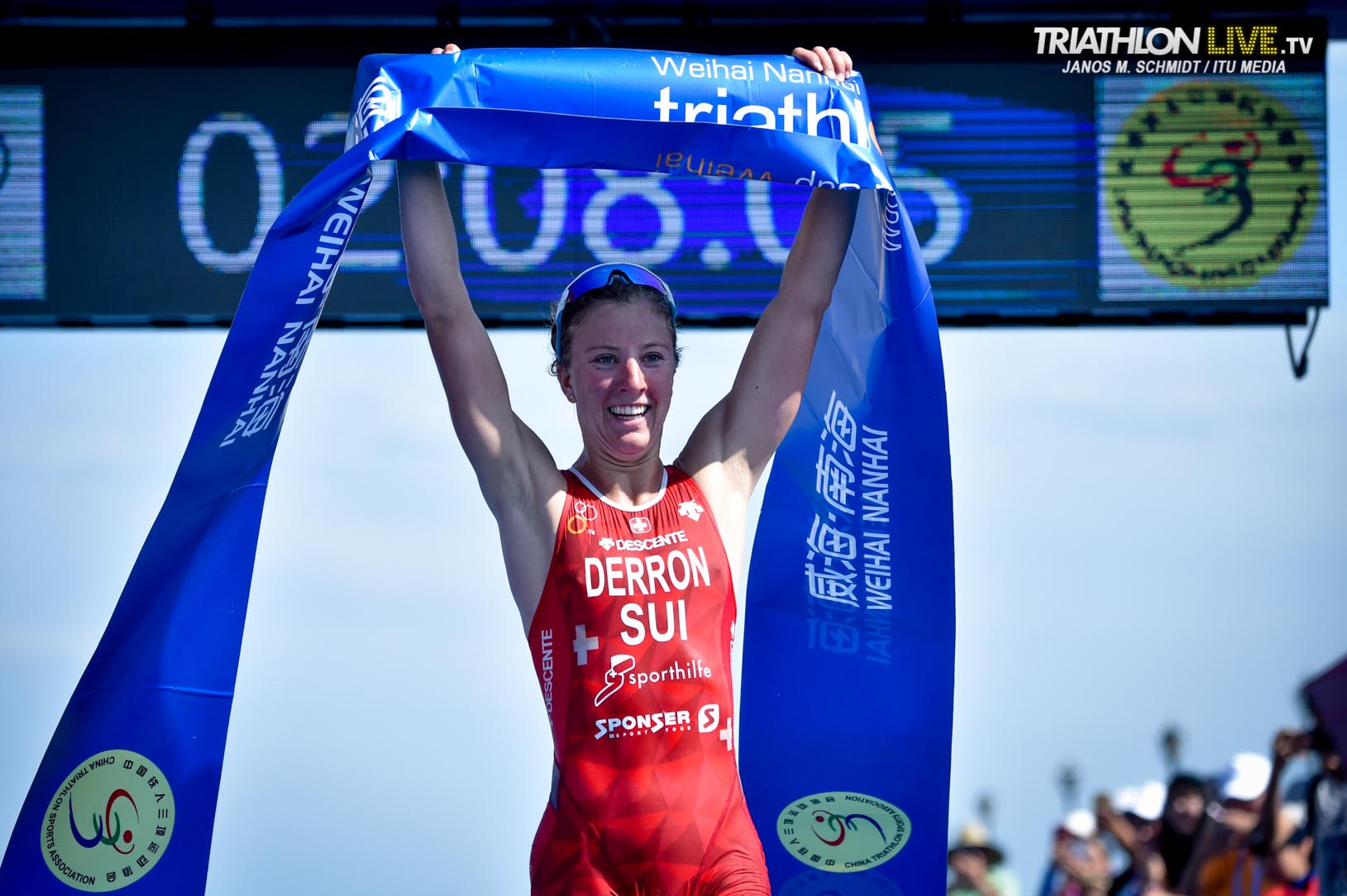 A field of 34 elite women lined up along Halfmoon Bay to tackle the 2019 Weihai ITU World Cup, over a standard distance race format. The course started with two laps in the waters of the bay, followed by a six-lap ride that includes an energy-zapping 2km climb, rounding off with four loops of a fast and flat 2.5km run along the coast.

As the athletes took to the stage, Lotte Wilms from the Netherlands made an early impact to lead the elite women through both laps of the 1.5-kilometre swim course. The water conditions suited athletes like the Australians, who are confident in the surf and were up front, looking to catch a quick ride into shore.

Wilms was the first woman into transition to produce a quick changeover and enter the bike course. A strong group of women were right on her wheel and ready to play chase.

It wasn’t long before the athletes in the lead group, renowned for their bike power, took control of the race.

In quest for the ideal breakaway companions, Italy’s Verena Steinhauser showed off her powerhouse bike leg and pushed the pace up the first climb of the day. Spain’s Miriam Casillas Garcia and Switzerland’s Julie Derron were right there with her. The trio broke away from the field and left the field to determine positioning in the chase group. Australia’s Natalie Van Coevorden and Emma Jackson took turns to drive the chase group, riding 50-seconds back at this stage.

The leading women showed no signs of pulling back as they extended their gap by nearly two-minutes on the other women.

With 1-lap to go the leading trio, Steinhauser, Casillas Garcia and Derron, had made a remarkable impact on the field and as they approached the final stage of the bike course they had bridged an astonishing gap between the running talent, embedded in the chase group.

With the likes of Vendula Frintova from Czech Republic, known for her standout run splits, at a considerably safe distance from sight, the leading women were no longer racing scared for placement in the field, but in a firing battle for the podium spots.

By the second lap of the run Derron was a force to be reckoned with as she pulled away from Casillas Garcia and Steinhauser, settling in her own stride. The Spaniard and Italian were running side by side at this stage.

At the five-kilometre mark on the run course, Derron was charging in the gold medal position, Garcia and Steinhauser were battling for silver and bronze and Van Coevorden, Russia’s Alexandra Razareno and Japan’s Hiraku Fukuoka were next in line and pushing the pace out on the testing run course.

Derron showed no signs of weakness as she dominated the race to cross the finish line and win the gold medal in the 2019 Weihai ITU World Cup, marking the first World Cup victory of her career. Derron produced a perfect race combination, showcasing power across all three disciplines.

“I am really really happy, I can’t believe it just yet. It’s great those days when it works out like it should and today was a day like that and I am overly happy.”

It came together pretty much after the swim so I knew I had to really nail that transition and the first hill. Verena (Steinhauser) pushed that first hill really hard and I know how strong she bikes so I had to keep going with her. After that first hill, we had a little gap and rode well together. I knew there were strong runners behind us so we needed a big gap onto the run.”

I felt really good all day today. I was going into the race knowing I wanted to have a good performance. I got onto the run and knew I just had to keep my rhythm, and keep pushing until the finish and that’s what I did today.”
“To come away with my first World Cup win is just really good,” Derron said.

Spain’s Casillas Garcia delivered a powerful race display to earn the silver medal, stepping up a notch from her bronze medal performance in 2018.

“The race was really really hard. Looking for Verena (Steinhauser) and Julie Derron was a good breakaway. We worked hard but really good on the bike for the position on the podium, not for every position and that was nice.
“There wasn’t any tactics at the start. The race puts you in your position. The race for three people was hard but worth it.

After the 5km mark, I started to feel a bit better and this race, you have to pace yourself a bit. In the first lap, I pushed a bit on the first hill and after that it was just about keeping going to the finish line,” said Casillas Garcia.
Steinhauser, a powerhouse on the bike, claimed the bronze medal for Italy.

“I tried to push hard on the first hill on the bike and I saw that we could just breakaway. We worked well together on the 6-laps. It was hard but it was quite different running for the podium instead of running for positions between the podium but I really liked the race, it was very good. It was my first time here in China, I really enjoyed it,” Steinhauser said.

A field of 49 elite men lined up along the coastline of Halfmoon Bay, in the north-eastern corner of Weihai, China, to compete for World Cup glory. Conditions were near perfect for race day, with the water temperature officially recorded at a comfortable 23.1 degrees Celcius and the air temperature a balmy 27 degrees.

Hungary’s Mark Devay established the early lead in the first 750m of the two-lap swim course, with top-seeded male Jonas Schomburg from Germany and Max Stapley (ITU) closely in tow. After the second lap of the swim Israel’s Shachar Sagiv was the quickest man into the first transition of the day and out onto the bike course. Schomburg and Devay were only a few seconds behind.

The 40km bike course tested the power of the elite men, as the route featured a challenging climb and descent which they rode across six-times, and sorted themselves among a few small groups.

By the third lap on the bike, the small groups had joined to form one powerful train of nearly 30 elite men on the charge. By this stage of the race, the remainder of the field of men were strung out across the course. This technical and tough course left no room for error or for those lacking the training on hills.

The group of lead men took turns to drive, with the likes of Ryan Bailie from Australia and Gabor Faldum doing a lot of work in front. Schomburg attempted a breakaway and it looked like Faldum was going to join the German but the group of elite men in the lead were too strong and quickly closed the gap. With one lap of the bike course to go, there were 30-men on the hunt together and it was then decided that the battle for the podium was going to come down to the men who were tactical. conserving energy and saving their legs for the run.

The massive group of men hustled into the second transition of the day in a frenzy and the furious running battle commenced.

Switzerland’s Adrien Briffod was the first man to enter the run course, which was 10-kilometre across four laps. Grant Sheldon from Great Britain, Schomburg, Joao Silva from Portugal, Mexico’s Rodrigo Gonzalez, Max Studer from Switzerland, Faldum and USA’S Kevin McDowell were pushing the pace among the front runners.

Bailie from Australia started the run with the leaders and was hanging on but fell off the back after the first lap. By this stage of the race Italy’s Alessandro Fabian was running 39-second behind the leaders.
The warm conditions out on the run course was taking a toll on the men and Bailie and Gonzalez were among a few of the elite men who lost touch with the leaders who were hammering the pace.

In the final stage of the 10-kilometre running race, Portugal’s Silva surged ahead of Studer and Sheldon to take the tape and win the 2019 Weihai ITU World Cup title. Today’s World Cup, capped the season for Silva who was thrilled with his race result and marking an honourable first race experience in China.

“I am pretty tired now actually but it’s a nice course, a really tough bike and even the run is hard with a little hard in every lap. I am really pleased with my performance today. The support from all the people here was unbelievable.

“The first laps were a little bit scary for me especially the downhill. I thought it was smaller actually. The downhill was pretty technical and I did everything I could do and produced a good result.

“I really didn’t know what to expect because my preparation for the race was not ideal and I played it safe so I could arrive to the finish and then I went for it and I tried my best and lucky it was enough to secure first place.”

“This is my last race of the season so it was about leaving everything in the field and that’s what I did,” Silva said.

Studer produced an impressive performance, showcasing his incredible bike form, to run home with the silver medal. Sheldon put it all on the line to earn the bronze medal for Great Britain.
“For me it was a quite good swim, I didn’t make it directly into the first pack but then on the bike I caught up on the first hill. We did hill training like this with my squad and hill repeats and it was perfect and I could show that here today on the race. Especially for me on the Olympic distance, it was good that I could show a good bike and in the end a strong run,” said Studer.