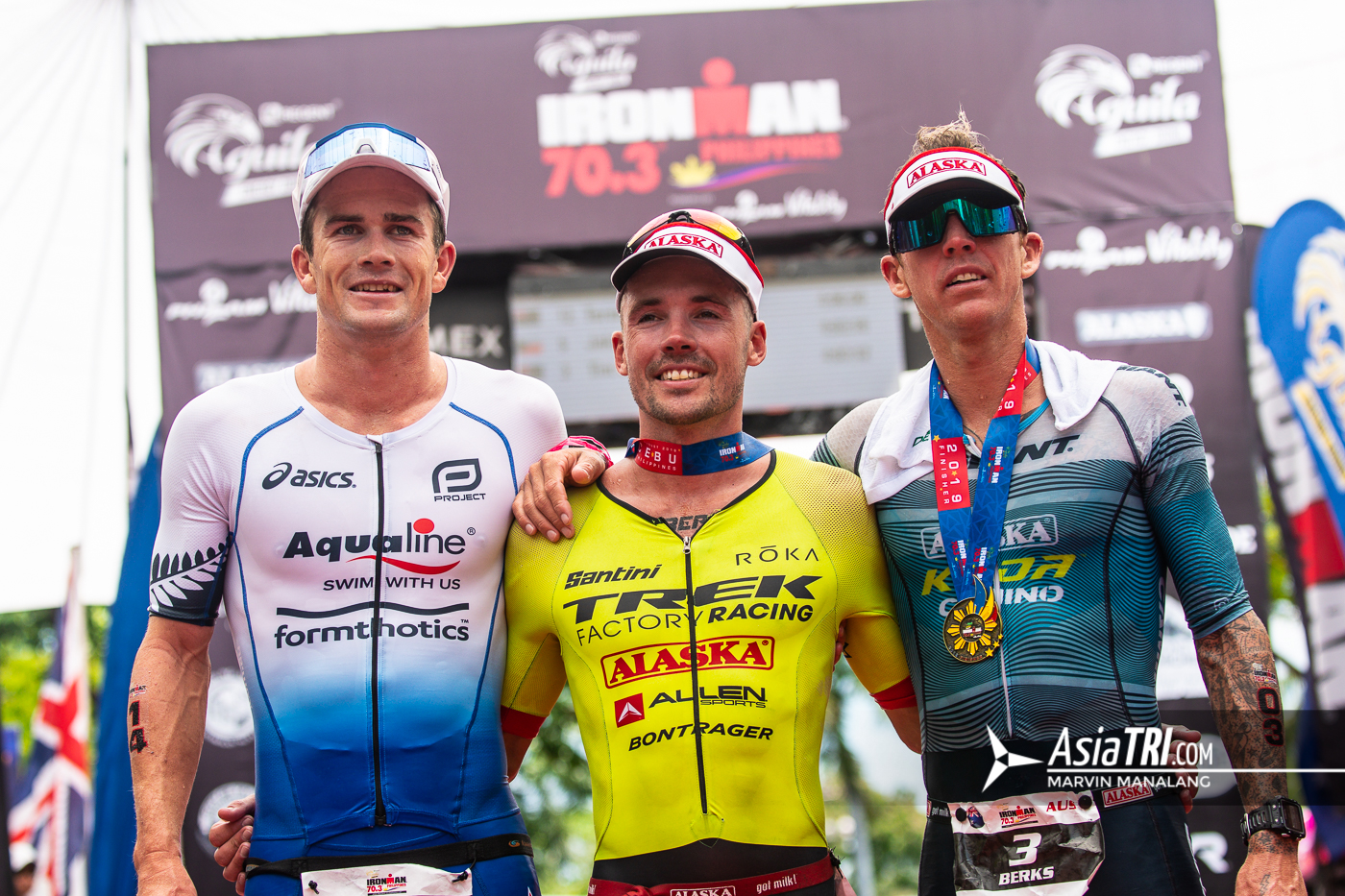 Tim Reed of Australia and Caroline Steffen of Switzerland are back as Champions in the island of Cebu as they both won the elite titles of the 2019 Ironman 70.3 Philippines.   Reed used the strength of his race-best 2:06:28 bike split and gained enough buffer to ward off pursuers in the last kilometer to win in 4:01:19.  It would be Reed’s 4th Ironman 70.3 Philippines title.

Caroline Steffen led from the start and completed her wire-to-wire victory in finishing with a time of 4:24:08, her sixth Ironman 70.3 Philippines title. 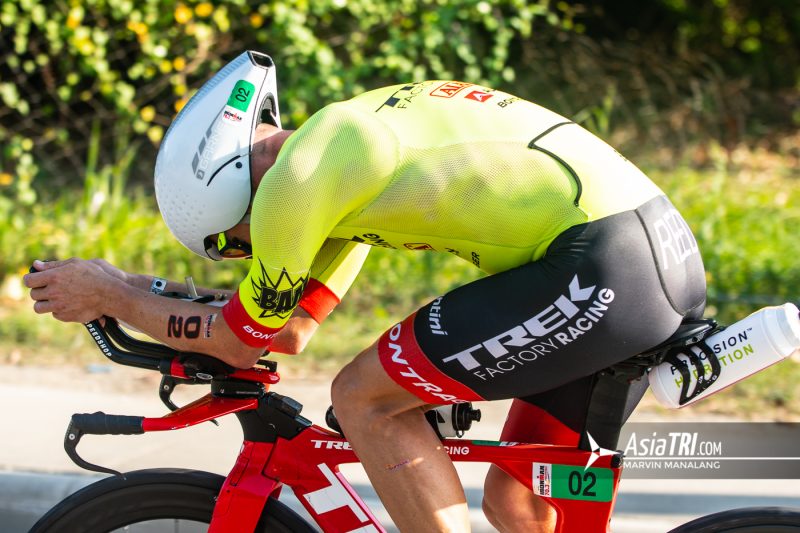 Tim Reed did not waste time and immediately pulled ahead out of the transition and started a breakaway from the lead pack, tagging along with him Mike Philips.   At around the 13km , Reed had gained a 42 second lead over Philips, and a 1:29 gap to the chase pack of Bozzone, Berkel, Watson, Jakub Langhammer, Hsieh and McKenzie.

Reed continued to push pace and had taken a 3 minute lead at around the 29km u-turn mark at Talisay City.   Philips dropped the pace  has rejoined by the big chase group.  By the 45km turn, Reed has opened up a 3:47 lead, added another minute on the pursuers by km 61.  After entering T2, Reed stamped a 2:06:28 bike split, the best of the race, and more importantly, it was 5 minutes and 19 seconds better than anyone on the field.

Reed was on the 1.2km mark when the big group of Philips, Bozzone, Berkel, Watson, Jakub Langhammer, Hsieh and McKenzie just entered T2 transition, that is around six minutes of cushion for the 21km run leg. Around the 6.4km mark Tim Reed’s lead is 5:41 on fellow Aussie Tim van Berkel who is 40m ahead of Mike Phillips and Jacub Langhammer.   Trouble caught up with Reed at around the 18km mark, and had significantly dropped his pace.   Philips has increased his pace and cut around 50 seconds to Reed’s lead in just 1 kilometer.  By the 19.3km, Reed’s lead to the big Kiwi was just 2 minutes and 28 seconds. 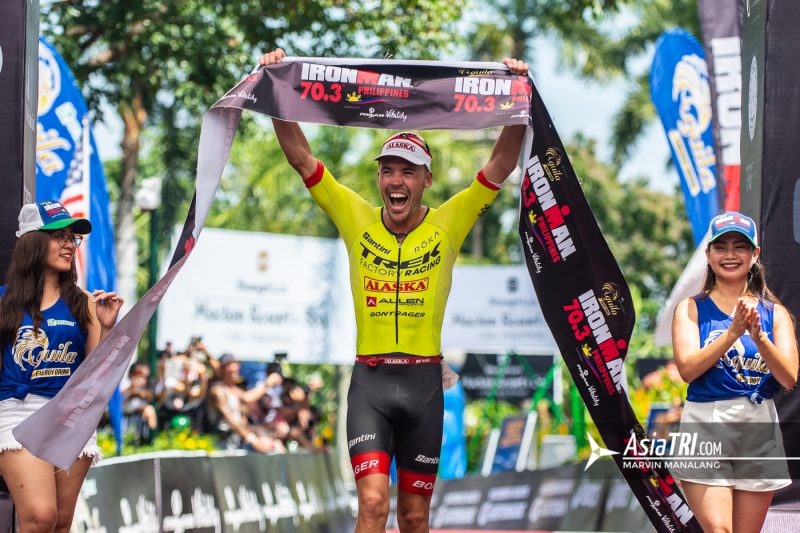 Reed, with GI stress and cramping from the huge bike effort, hung onto the lead, and survived to finish in 4:01:19, with still a 49 second margin over Mike Philips.  Philip’s 1:21:13 run split was the best of the day in another hot and humid day in Mactan Island.  Berkel finished in 4:03:11 on another podium finish in Philippine soil.

In the women’s race, Caroline Steffen was the first pro out of the water at 27:05 but was closely followed by Aussie Courtney Gilfillan, with only one second separating them.   Kiwi Laura Wood also followed suit, only 4 seconds down on the swim leaders.   Steffen was able to ride along the men’s asian elite, gaining time on their wave who started off with main elite Pros.   It was in the bike leg that Steffen paraded her strength, plowing through the female elite race by submitting a 2:17:20 split, the best among women by a huge chunk-6 minutes and 49 seconds better than the second best biker, Dimity lee Duke, who registered a 2:24:11. 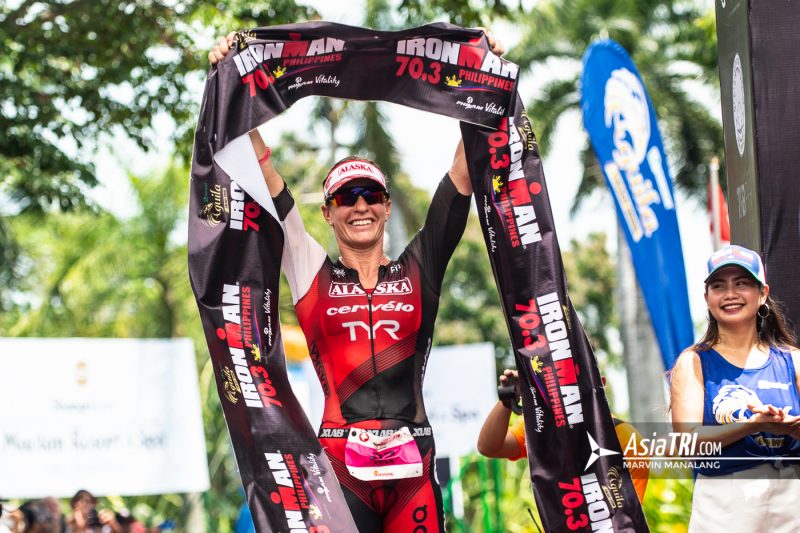 Steffen showed no weakness racing in the heat as she also registered a women’s best 1:34:55 run to bag her 6th title in the Ironman 70.3 Philippines.   Dimity Lee Duke overtook Gilfillan on the run leg to capture runner-up honors.  Gilfillan finished 3rd and a podium on her first race in the Philippines.