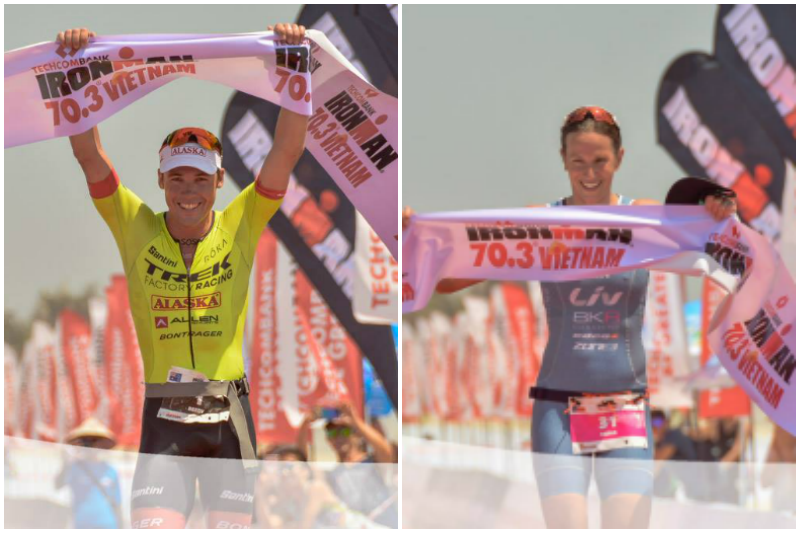 2016 Ironman 70.3 World Champion Tim Reed of Australia and resurging Radka Vodickova-Kahledfeldt of the Czech Republic took the elite titles at the 2018 Ironman 70.3 Vietnam.

Tim Reed secured the win with strength of his race-best run split of 1:21:23 to beat fellow Aussie Tim Van Berkel in 3:54:55.   Radka Kahlefeldt continues her streak in southeast Asia with another dominating wire-to-wire victory with a finish time of 4:14:36.

Mike Phillips of New Zealand was first out of the water going into T1 with a swim time of 23:40.   The Kiwi was closely followed by Reed and Van Berkel, only 6 and 7 seconds back.   A pair of Polish pros, Pawel Miziarski and Bartosz Banach trailed by more than 3 and 4 minutes respectively.

The trio of Phillips, Reed and Van Berkel were basically inseparable as they gradually increased their lead over the chase pack.  By over the the halfway mark of the bike leg, the trio has expanded their lead by over 7 minutes.

Van Berkel had the day’s best bike split at 2:07:09, but only 2 seconds faster than Reed.   They were accompanied by Phillipps as they approached T2 together.

Reed has this to say, particularly on the run course when the blazing sun shone through the early morning overcast conditions; “The conditions are as tough as it gets, and when you have someone like Tim who is a tough competitor, and tougher in the heat, makes for a really, really rough day…and brutal on that run.”

On a roll with her wins in Davao and Challenge Melbourne after giving birth to first child Ruby, Radka definitely was on a great start as she led the swim, and entered T1 with a swim time of 25 minutes, a 52 second lead over Kiwi Laura Wood, 1:59 on Caroline Steffen of Switzerland, 2:39 on Leanne Szeto of Hong Kong and 3:45 on Dimity-Lee Duke of Australia.

By the first third of the bike leg done, Kahlefeldt had built a lead of over 5 minutes over Steffen.   With only clear roads ahead of her, Radka had caught up with the chase pack of the men’s field, eventually coming in 6th overall around the halfway mark of the course.

With also the  women’s best 2:16:57 bike split, Kahlefeldt had increased her lead into T2 by 8 minutes, now over Asian-race scene regular Dimity Lee-Duke of Australia, Steffen by 12 minutes and by 13 minutes on defending champion Anna Eberhardt of Hungary.

With that enough cushion and never threatened, Radka did not let-up still, and posted another women’s best run split of 1:29:45 on her way to winning her 3rd title this year.   Kahlefeldt finished in 4:14:36, a 10:59 margin of victory over Duke and 15:21 over 3rd place Steffen.

Asked about her dominating wire-to-wire victory, Radka said “I just felt amazing the way, and I guess, I just have to hold steady and have faith..”.

Close to 1600 athletes toed the starting line of both the Ironman 70.3 race and the Sunrise Sprint category, with an impressive, and growing 650+ athletes from the host country Vietnam.   Next year, Danang will host the Ironman 70.3 Asia-Pacific Championships.