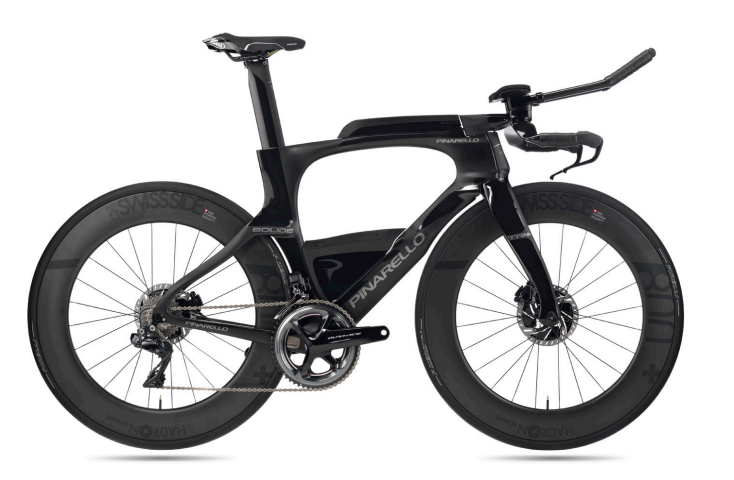 With four consecutive Kona Ironman World Championship titles under its belt, Canyon has emerged as one of the hottest seller on the market right now.  The updated version has a longer wheelbase and more adjustability on the cockpit, allowing for more straightline speed and improved comfort.  Combining great specifications and superb geometry, this is truly an excellent bike in terms of value, riding and speed.

The Bolide is what Aussie Pro Cameron Wurf rode in two consecutive record-breaking bike splits in Kona.   In 2017, he rode the 180k course in 4:12:54.  Wurf further trimmed down his all-time record in 2018 with a 4:09:06 split.  The Bolide does not only have impressive showing at Kona, its UCI conforming-pedigree also showed up at tour stage wins in Giro, Tour and Vuelta.   Pinarello claims that TR+ goal is to create a Triathlon bike without compromising the speed of the Bolide TT.   Without any UCI rules to conform, TR+ it is meant to be faster than its TT counterpart, with longer fork profiles, and aero-shape frame that is wider than UCI’s 3:1 frame shape rules. Cervelo once again targets the iron-distance loving group of age-groupers.   One of the problems in iron-distance racing is the multitude of nutrition and hydration you need to store in the bike.   The P5x solves most of the storage problems, without the hassle of ruining the bike’s aerodynamic features.   It has storage options in three areas, the top tube for your nutrition, and two areas near the bottom bracket for your tools and flat kit.   The beam bike design has been around since the 90s but this updated version from Cervelo packs serious stiffness and speed, thanks to its massive bottom bracket design.   The front cockpit is also highly adjustable, unlike its little brother P5.

The new S-Works Shiv Tri Disc which debuted right before triathlon’s biggest stage at Kona drew polarizing reviews, particularly aesthetics-wise, spotting the huge fuel storage right behind the seat tube.  This model is designed with only triathlon in mind, and smashes the UCI cofirmity rule book, with dropped seat stay, rear-fairing and integration of twin blade forks into the wing bar.  Specialized has claimed that the bike is the fastest bike Kona has ever seen, and while it has to put out the actual numbers yet, it has focused on storage options for water, nutrition supplements and food, thereby limiting precious pit stops on course.   Specialized also put focus on adjustability and fit, which is understable given the company’s recent acquisition of the Retul fit system. This machine was a product of many studies on triathletes and years of product development.   Well-thought out tube shaping, maximum component integration, and months spent on the wind tunnel makes this bike as one of the fastest in straight-line speed.  It also features a V-shaped cockpit, with adjustability to raise the stack-height, allowing for a more upright position and comfort. Parlee TTiR Disc is of the few tri bikes to embrace disc bakes for all-weather condition reliability.    It has a nice mix of adjustability and integration while remaining user friendly, which is a key for athletes traveling to big races.  What goes fast, stops fast is a nice tag-line for this high-end bike for Parlee.

No downtube?  No seatstay?  That’s not a problem with this bike from Ventum racing.   Without those, the Ventum Oneone  is touted as one of the most comfortable super bikes on the market.   It is made for the most luscious long-haul, straight-line riding you will ever have.  While one may ask, where will I place my hydration bottles and stuff, Ventum made a genuine integrated hydration system in the top tube.   That is 47oz of hydration and refillable on the fly.  Comfort and fast don’t usually go together but Ventum One made sure that the transfer of power from the rider to the machine is seamless with the stiff bottom bracket design, making it one fast super-bike that looks different from anybody else. Another triathlon bike with a disc brake system.  What separates this QR model is the asymmetrical chainstays that aims to reduce road noise and improve ride comfort.   The PR6 has integrated storage box on the seat-tube and bento box for your nutrition in the top tube.   The front cockpit is also highly-adjustable, making it one of the most bike-fit friendly super bike in the market.

If there is one triathlon superbike that is laughing at UCI rules, the Ceepo Shadow R is the obvious prime suspect.  It puts its bluntly that the regular fork on your triathlon bike is not aero, removed it, turned it into its side.  The resulting form puts a sleek carbon hood around the front wheel.  The unique side fork design not only claims to enhance aerodynamic performnace, but Ceepo claims that it drastically dampens road vibration too. Trek’s Project One customization program means that your high-end superbike will be the only one of its kind in the whole world.   Different paint scheme, customized decals, and your choice of components and accessories means that this triathlon bike will be your build and yours alone.    “If you can dream it, we can make it reality — even if that means developing a new paint specifically for your frame”.  That is the underlying goal of Trek’s custom build program.   What is TREK is trying to reach here is that performance in aerodynamics, weight and function will always be present in high-end superbikes, but it must disclose part of your identity and personal story.   If you got cash in the bank, Trek’s P1 program can built it for you.