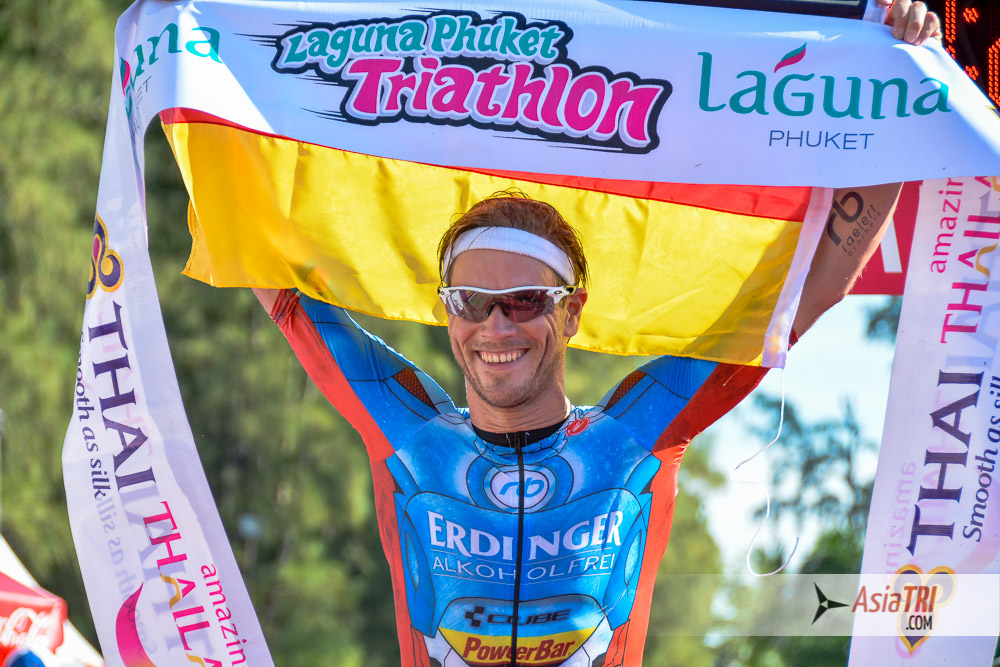 Germany’s Michael Raelert and Switzerland Simone Braendli, were the champions of the 2015 Laguna phuket Triathlon, the most traditional triathlon event in Asia also know as the “race of the legends”, all the triathlon greatest athletes have done LPT in the past such as Mark Allen, Simon Lesson, Paula Newby-Fraser, Chrissie Wellington, Craig Alexander and many more.

Former Ironman 70.3 World Champion Michael Raelert was the first out of the water, covering 1.8km in 23:55, he was  followed closely by London 2012 Olympian Stuart Hayes of Great Britain. The duo had a twenty seconds lead on Alberto Casadei of Italy and Ruedi Wild of Switzerland.

Raelert quickly took charge of the bike and start to build his lead over the 55km bike course, Stuart Hayes, also a very experienced cyclist who was the domestique for the Brownless at the 2012 Olympics, managed to stay close but still lost four minutes by transition two, along with him it was Ruedi Wild, Challenge Laguna Phuket 2014 champion. The pro women saw a much tigher race with the first two athletes racing side by side for most of the competition.

Simone Braendli was the first out of the water in 00:28:14, she ahd Emma Pallant and Deirdre Casey on her toes. The trio had a two minute lead to Dimity-lee Duke, Imogen Simmonds and Katja Rabe.

Simone and Emma quickly dropped Deirdre, and it was a two women race for most of the bike with Simone setting the pace in the front, Emma was able to keep up until the final third of the big leg, when Simone upped the pace to arrive with a two minute lead in transition two and the day’s best bike split of 01:31:45.