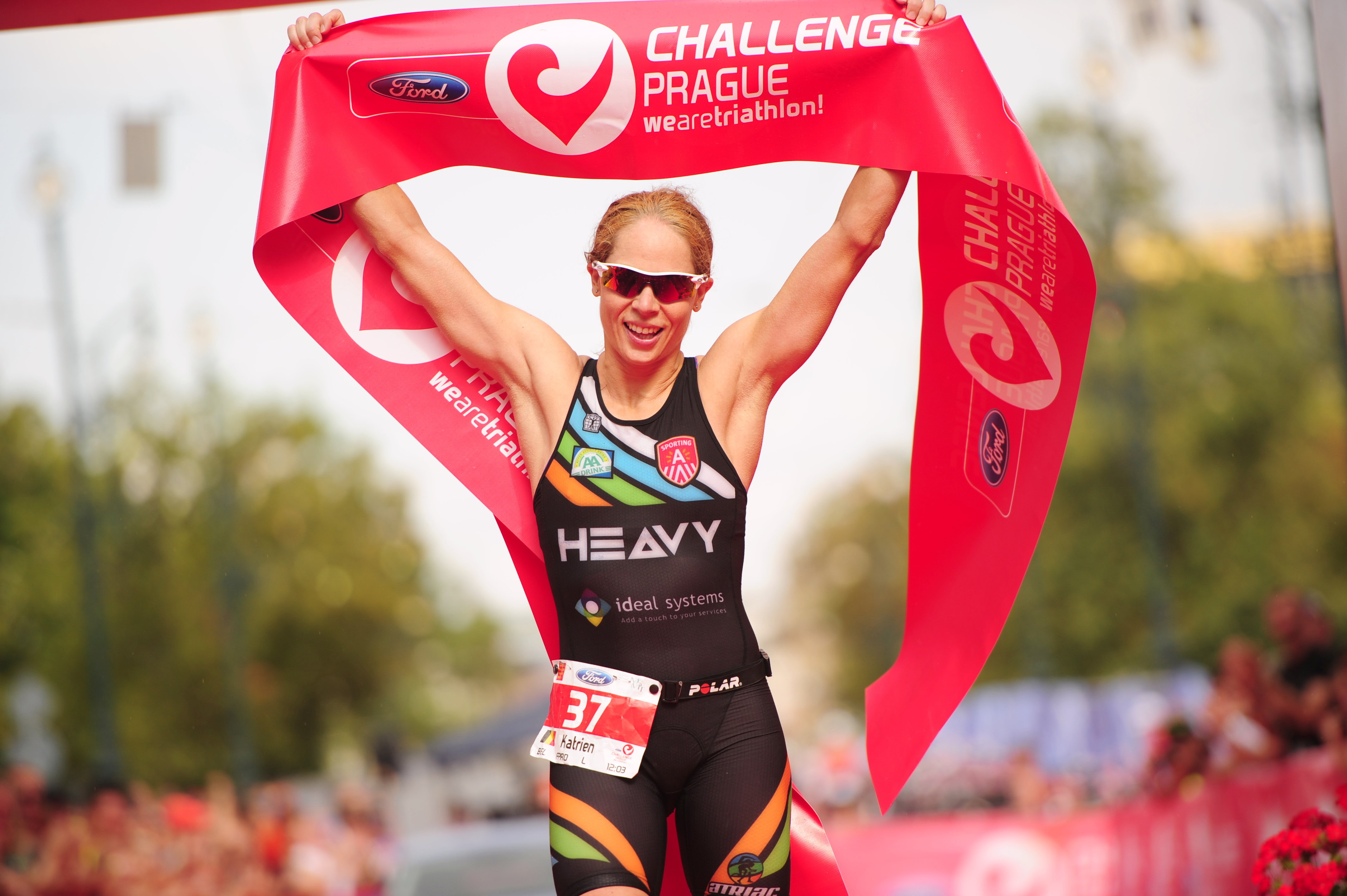 The second edition of FORD CHALLENGEPRAGUE(1.9 km swimming, 90 km cycling, 21.1 km run) took place in the center of Prague on Saturday. The unique event which belongs to the prestigious CHALLENGEFAMILYseries was won by Javier Gómez and Katrien Verstuyft. Best Czech triathletes Lukáš Kočař and Simona Křivánková finished in top 10.

There was a strong competition field at the start of the second edition of FORD CHALLENGEPRAGUE– last year’s winner Belgian Pieter Heemeryck, one of the biggest triathlon stars Javier Gómez(ESP) or latest long distance World Champion Pablo Dapena(ESP). A lot of athletes commended the surroundings of Czech capital city, enjoyed the course and great atmosphere around.

Men’s category was dominated by five-time World Champion and silver Olympic medalist Javier Gómez. “The race wasn’t easy at all. The guys were very strong especially on the bike and it was hard also because of the heat. However, I found my strength and fans pushed me to the finish line. I really enjoyed the competition and the city, it was amazing experience,” said Gómez who was followed by his compatriot Pablo Dapena. Last year’s winner Pieter Heemeryckfinished on the third place.

Katrien Verstuyft from Belgium took gold in women’s event. “It is the first time I won the Challengeevent. It was really hard in the last running lap, I got bad stitches and I saw the others behind, but I am happy I could handle it. There is no better feeling than breaking the finish tape first,” said Verstuyft. Silver was taken by Kirsty Jahn(CAN) and Laura Siddall(GBR) finished third.

The best Czech triathletes were Lukáš Kočař(6thplace) and Simona Křivánková(7thplace).  “If it weren’t cloudy and if it didn’t rain a bit in the end, I guess I wouldn’t finish the race. Sixth place is real success in this competition and time under four hours is amazing. To compete with these guys was truly special and I really enjoyed the race,” said Kočař.
“Of course I am happy that I was the best Czech women. Honestly I am surprised that I finished on the 7thplace. Last year I was fourth but today there was much stronger field,” said Křivánková.

“We are a sporting family. My brother Pieter is the last year’s champion of this event in middle category. It was a beautiful race with lot of people around. Prague is really nice city,” said the overall winner of TRY-ATHLON category Sander Heemeryck.

“I didn’t feel great about swimming because lot of people were getting out from water just in front of me. Compared to the last year, there was a change in swimming part and I wasn’t used to it. However, running went good and I am satisfied with the result,” said Tereza Skuhrová, third woman of the TRY-ATHLON race.

Eminent Czech cardiologist Jan Pirkwon his category over 70 years-old and finished on 39thplace overall in category TRY-ATHLON. He attended the category RELAYS as well together with opera singer Jiří Langmajerand Josef Les.  “It was a really nice race. I have participated in all four editions of Prague triathlon. Especially for us, hobbies, triathlon is very effective as it combines three different disciplines,” said Pirk.

The race was commended also by Olympic champion in decathlon Roman Šebrlewho took 9thplace in his category and 45thplace overall. “Swimming is my slowest discipline. Compared to the last year, I felt better on bike but I didn’t know how many laps there was, so I hope I counted them right. I enjoyed running as well,”summarized Šebrle.

The RELAYS category was dominated by Czech teams – Ford One, CSG Tri Team and Saucony Superheroes.