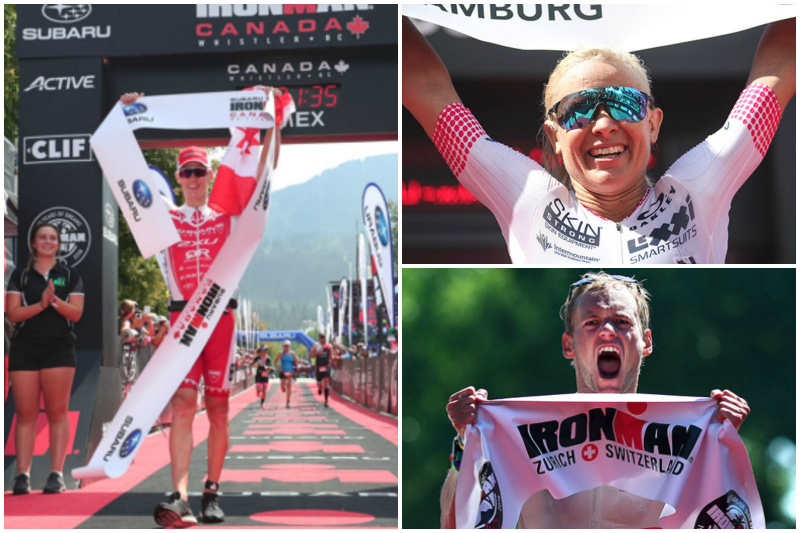 Aernouts and Crowley happy in Hamburg

Due to a higher concentration of blue-green algae in the water, the swim had to be cancelled in Hamburg. This was the reason why an early shootout took place in the men’s race, on both the bike and the run. A large lead group hammered away from the get-go over the almost pancake-flat course before defending champion James Cunnama and Belgium’s Bart Aernouts started to pull away. Cunnama broke the group into pieces on the final 30 kilometers, getting off the bike with a sensational split of 4:00:44.

A huge pack of 14 male pros went on to nail the 6-kilometer long run course in under 20 minutes. With Aernouts at the leader’s heels, the 35-year-old started the run after a ride which had been quite similar to his glorious performance the year before. Butt all eyes were on the returning Tim Don to make up a lot of ground in the marathon after getting off the bike only one minute down. It was another Brit, however, who jumped on stage during the run: Joe Skipper was waving the UK flag in the marathon while Don finished in ninth after a tough fight in a very fast race. Although the Boulder resident didn’t reach his goal to win the race, he was happy to see his kids and family at the finish line. Hamburg was Don’s race to come back to the IRONMAN distance after his horrible crash last October, three days out from the IRONMAN World Championship. Just as the crowd paid full respect to Don, they cheered for Aernouts, who dominated the run right from the start. The 34-year-old ran a sub 2:40 marathon to nail the win in great style. Skipper added a great run too, taking second in front of Cunnama only two weeks after winning IRONMAN UK.

Three weeks ago, Sarah Crowley witnessed Daniela Ryf’s perfect day in Frankfurt, where the defending champion ranked third behind the flying Swiss at the IRONMAN European Championship. This time, again in Germany, it was not the time to let anyone go on the bike. Sure, the defending champion Daniela Saemmler tried to break away from the rest of women’s pro field on the bike course, but Crowley kept contact to her back wheel from the beginning. After playing some chess-like mind games on the bike course, the German then hit the gas on the second lap and opened up a gap of two minutes. Saemmler tried hard to make use of this advantage on the run, but it didn’t take Crowley too long to downsize this margin again. Through 15 kilometers, the Australian made the pass for the win while Saemmler started to struggle. Instead of Saemmler, a German surprise ran into the runner-up spot, Katharina Grohmann.

There is no better way to reign at IRONMAN Switzerland than the Swiss way. The victory in the men’s competition was Swiss made one more time thanks to the brilliant tactics of Jan van Berkel. The 32-year-old was runner-up twice in Zurich, and has taken third place twice as well. He had been dreaming so often of being victorious in his favorite race, but he was never able to reach this great goal.

This time, van Berkel kept cool instead of attacking on the first half of the run in brutal style and struggling on the second part. He played smart on his home soil, although the race was fast right from the beginning. As always in the crystal clear Lake Zurich, the swim was a bit slower compared to other events, but it was fast enough to drop nine-time winner Ronnie Schildknecht, the uberbiker Cameron Wurf (AUS) and runners like David Plese (SLO) decisively. Van Berkel exited the water in first and started to pace himself solid in the lead group. He remained relaxed even when Wurf made his pass to the front with Plese at his back wheel. The two came off the bike with a bike course record for Wurf and a gap of almost nine minutes, but the tough ride through the hot day cost them a lot. Van Berkel downsized the gap to the front step by step on the run and speeded up on the final of four run laps. He proved his strength on the final seven kilometers, exactly in the section where he has struggled so often in the past. He made a dream come true and took the 18-year-old course record away from Swiss legend Olivier Bernhard.

While tactics dominated the men’s race, the women’s competition was a two-athlete battle right from the start. Sure, Australia’s Annabel Luxford was the strongest swimmer in the field, but as soon as Kaisa Sali from Finland hit the bike course, she started eating up Luxford’s advantage of two minutes. The 36-year-old caught up with the quickest swimmer and sailed away with her to form a leading duo for most of the hilly course. Sali eventually put the cards on the table shortly before the leaders reached the final climb at the enormously crowded Heartbreak Hill next to T2. She embarked on the run with a gap of almost two minutes to Luxford, but the Aussie didn’t throw in. Luxford tried hard to gain time on the leader again, but she obviously invested too much energy into this effort. Sali sailed away, and Skye Moench dropped Luxford on the final stretch of the marathon, too.

McMahon keeps it cool in Canada

At the pro men’s race in Whistler for this year’s IRONMAN Canada, Brent McMahon (CAN) was first to hit the shore of Alta Lake and just seconds later had Mark Bowstead (NZL), Jeff Symonds (CAN), and Justin Metzler (USA) following him into transition.

Early into the bike, McMahon, Symonds and Kiwi Bowstead proved to be strongest in the field and pulled away from most of the field. Marino Vanhoenacker (BEL) made a methodical push to the front of the race in the second half of the ride while Symonds got spit off the back of the lead trio. Vanhoenacker would join McMahon and Bowstead and the lead trio  hit the dismount line within 12 seconds of each other.

In the first 3 km of the run, Vonhoenacker and Bowstead cracked in the heat and started to go backwards in a big way. Symonds was matching McMahon’s run pace just over six minutes back and worked his way into second by 8 km. For the next 25 km, the gap between the pair of Canadians floated between 6:15 and 6:30 minutes. It wasn’t until the last 8 km of the run when the spread between the two opened up, with McMahon eventually taking the win by a margin of close to nine minutes on Symonds.