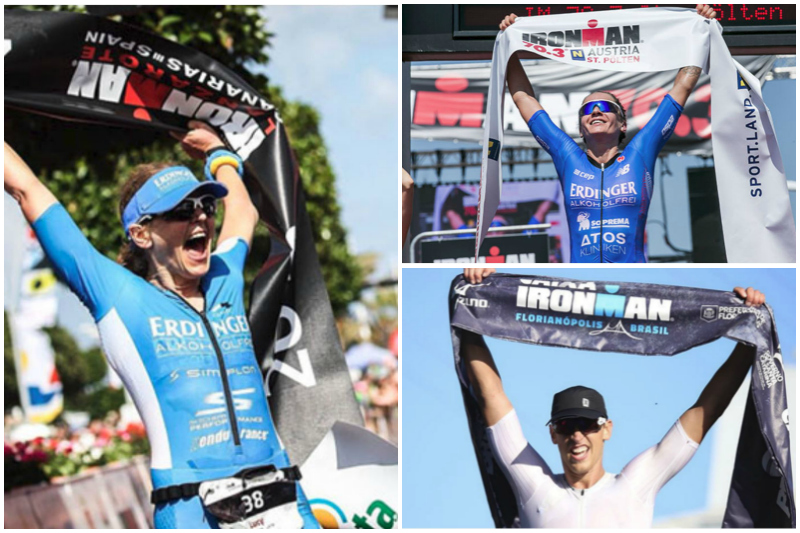 Jesper Svensson (SUI) was untouchable in Florianopolis on Sunday. The lanky Swede lead the field out of the water and proceeded to pad his advantage throughout the bike carrying a five-and-a-half minute advantage on Igor Amorelli (BRA) and close to a 10-minute gap to third as the bike portion of the race concluded.

Once the race hit the run, Amorelli narrowed his deficit to the leader by a minute in the opening kms, but was never successful in getting any closer than 4:30 to Svensson. By the end of the run, Svensson claimed the win in South America by a 6:23-minute winning margin.

In the women’s race, Haley Chura (USA) put her stamp on the race in the swim hitting the beach a full five minutes earlier than her closest rival. Kirsty Jahn (CAN) out-biked Chura throughout the 180 kms and dismounted her bike enjoying a seven-minute lead on the American. Jahn would lay down a solid run to claim the win in 8:54:58 over Piampiano whose race-best run rocketed her into second in the second half of the run.

Alessandro Degasperi usually is a man for the second half of an IRONMAN race. This time, everything was different at the Club La Santa IRONMAN Lanzarote. Whenever the race announcers talked about the lead group in the men’s pro field during the swim, they were wondering if they should really say what the spotters told them from the swim course. Degasperi, famous for weaker swims and superb bike-and-run performances, was among the best in the water. Thanks to the swim of his life as a professional triathlete, the 2015 champion was part of the leading swim group and already in the mix when the tough bike race started.

Degasperi hammered onto the hardest bike course on the planet together with 2014 winner Romain Guillaume, but he was in his own zone soon, because Frenchman Guillaume started to struggle about halfway. When Degasperi hit the highest point of the course at the breathtaking scenic point Mirador del Rio, the 37-year-old knew about his great position. Spaniard Ivan Rana worked hard to get close to the Italian leader, but Degasperi kept going and didn’t show any weakness throughout the marathon. Although Rana was nailing a good run as Cyril Viennot and a storming Danish in fourth, Jens Petersen-Bach, Degasperi never let anyone come closer than 5 minutes in the run.

A former champion also performed well in the women’s race. Lucy Gossage was one of the big names on the start list, but the 2015 champion knew about the talent of athletes like the multiple IRONMAN champions Yvonne van Vlerken or Michelle Vesterby next to her. Gossage didn’t care and pushed herself early to the front, just like Degasperi. Vesterby could benefit from her strong swim on the first half of the bike, but after that the 38-year-old from Great Britain took control. Gossage was already in the lead,before she passed the top of the course at the Mirador del Rio. Ranking third last year, she nailed a fast bike split and had an advantage of more than four minutes when she started the marathon. Just as in men’s race, the strong runner was off and away early.

At the 12th edition of the IRONMAN 70.3 St. Pölten the 1.9 km swim – combining 2 lakes with a 200m running passage – was dominated by Lukasz Wojt (GER) in 00:23:29. On the bike course, held on a highway for the first 18km, the Italian Giulio Molinari took over the leading position quickly followed by Ruedi Wild (SUI) and the two Germans Florian Angermann and Michael Raelert. Austrian Michi Weiss came from the back and made it to T2 in 10th position. The leading trio with Molinari, Wild, and Raelert stayed stable until km 16 when Michi Weiss took over the lead. He kept his fast running pace and won his home race with a new race course record in 03:51:36. Wild finished second in 03:53:20, Molinari completed the podium in 03:54:03.

Helle Frederiksen (DEN) was first out of the water on the women’s side in 00:26:39. Three-time winner Laura Philipp (GER) came out fourth, but quickly took over the lead on the bike. She kept her position and started the half marathon shoulder to shoulder with Frederiksen who soon fell back. Anja Beranek (GER) in third chased the two but Philipp couldn’t be reached and won the IRONMAN 70.3 St. Pölten for the fourth time in a row in 04:14:25. Frederiksen tooka second in 04:17:25, nd Beranek finished third in 04:21:59.

Triathlon Wetsuits Explained – What to Look for when Buying