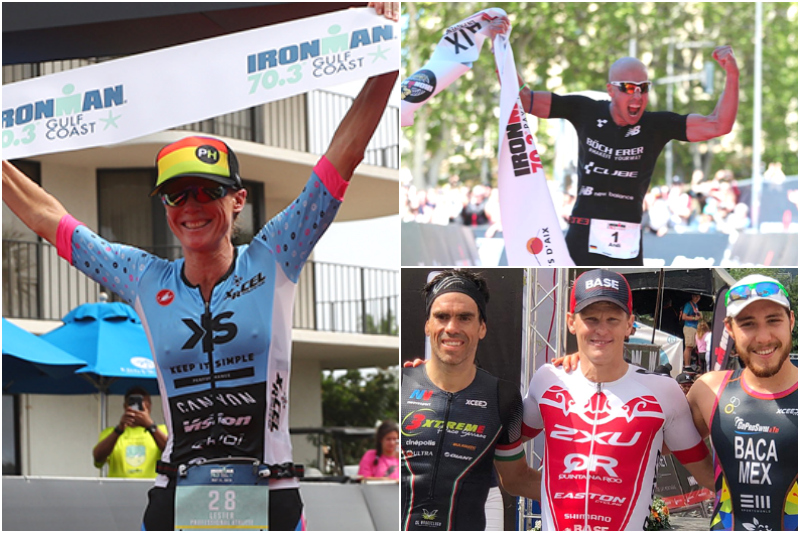 In the men’s race it appeared that Felipe Van de Wyngard (CHL) would capture his first IRONMAN 70.3 title in Florida if he could hold off the challenges being thrown at him by TJ Tollakson (USA).  The Chilean exited the water with a 7- second advantage on Tollakson and couldn’t shake the American for the entire 56 miles on the bike. Van de Wyngard would hit the run with a leading gap of 50 seconds, bumping that up to two minutes for the early miles of the run. With two miles to go, Van de Wyngard’s lead was at a minute when the wheels fell off his race. Tollakson was quick to pounce on the situation and made the pass for the lead with a mile to go and onto the win.

In the women’s race, Lauren Brandon (USA) put on her usual swim clinic in the water for a 2:37 advantage on Carrie Lester heading into T1. Lester managed to limit her swim losses on the bike and hit the dismount line just seconds back of the leader. Powering her way into the lead in the opening mile of the run, Lester would run away from the field to grab the victory by a 10:31 winning margin on her closest rival.

Brent McMahon (CAN) and Francisco Serrano (MEX) hooked up on the bike and were inseparable for the second half of the bike. The pair racked their bikes together and headed out on the two lap run. McMahon was on mission and punched out the race-best run on the day to take the win, clocking 3:43:19 finishing time.

Lauren Goss (USA) put in a solid performance in all three disciplines in to record the win in Mexico. Sarah Piampiano (USA) made a huge push on the bike to reduce the gap to two minutes heading into T2, but that would be as close as anyone get to Goss as she cruised to the win in 4:06:32.

Andreas Boecherer took his third win at the IRONMAN 70.3 Pays d’Aix thanks to a stunning performance. The 36-year old German had a big smile on his face after crossing the finish line, but he was both physically and mentally empty. Boecherer had been almost a minute down in the water behind France’s Robin Pasteur before he embarked (once more) onto a great bike ride. The defending champion nailed a gutsy split in 2:09:52 and was able to stay clearly in front of other oustanding riders like Andreas Dreitz (GER). Obviously, Boecherer’s plan was to keep guys like the strong British runner Adam Bowden off his neck. The idea was good, Boecherer’s tactics worked, but Bowden made up a lot of ground on the run course. The IRONMAN 70.3 Dubai champion started the run with a deficit of more than five minutes and ran from fifth into second position within only a few kilometers. Bowden put in a 1:08 half marathon for silver, but couldn’t get closer to Boecherer than a minute. After winning at the IRONMAN 70.3 Marbella two weeks before, Andreas Dreitz (GER) rounded out the podium.

While Bowden missed the win, the podium in the women’s race was decidedly British. The young pro athlete India Lee came out of the water in the lead and kept this position for more than 30 kilometers. Emma Pallant had to downsize the gap of more than two minutes after the swim, before she could aim for the leading position. Once Pallant got to the front, Lee didn’t throw in. She kept up with Pallant‘s pace until they came off the bike side by side. Lee had to suffer a bit later on the run due this tough ride. Leader Pallant hammered away early, Nikki Bartlett outsprinted Lee on the final kilometer.

6 Essential Tools Every Triathlete Should Own