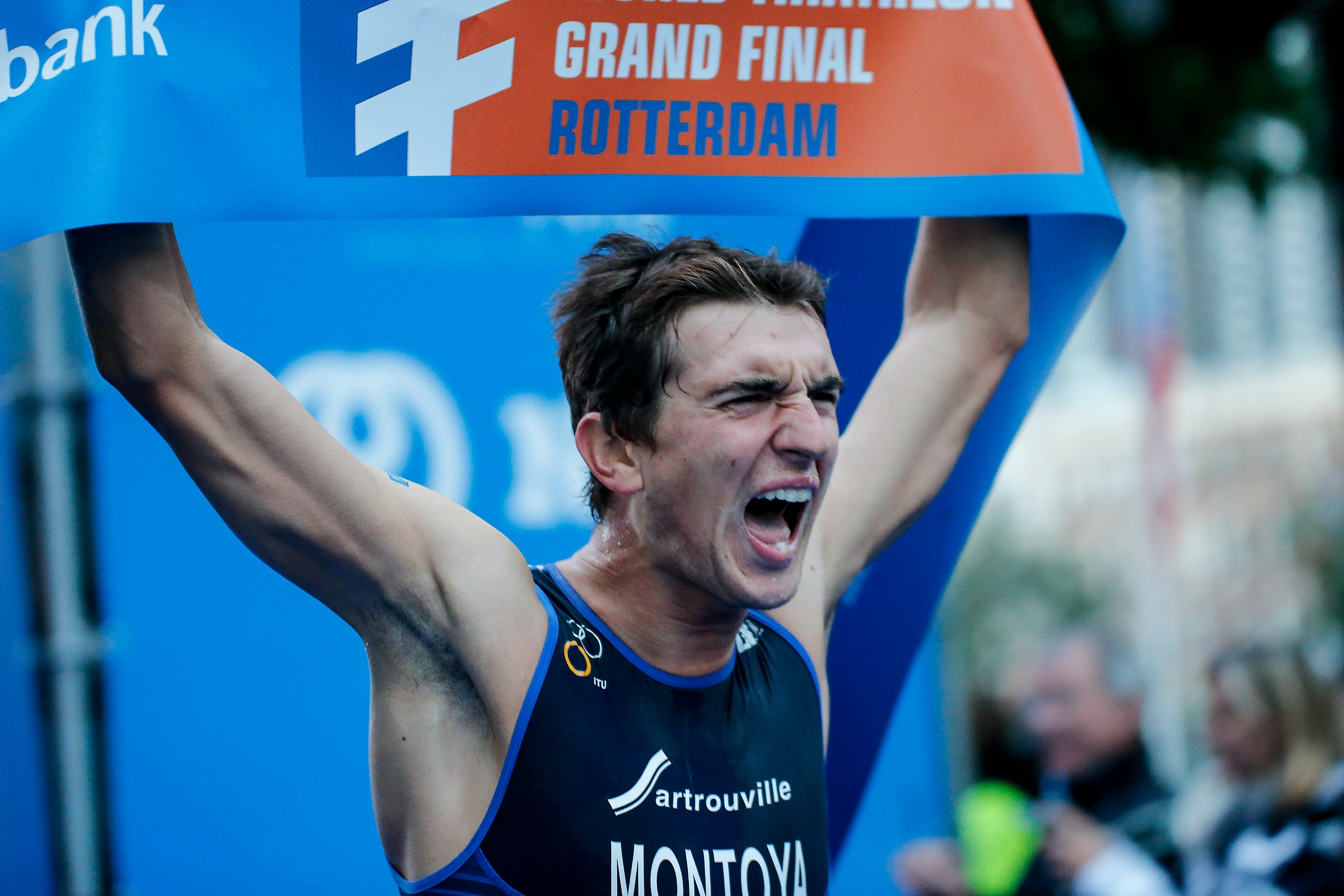 Screaming with excitement as he grabbed the finish line, France’s Raphael Montoya was named the U23 Men’s World Champion at the 2017 ITU World Triathlon Grand Final Rotterdam.

After being down by a 42-second deficit out of the swim, Montoya held on in the main chase pack to only bust out of the gate on the run to eventually become the race leader. Then in a sprint finish with French compatriot Dorian Coninx, he ultimately crossed the line first to officially seize the U23 World Title. The crown is a second-time honour for the Frenchman after he also earned the Junior World Title in Edmonton in 2014.

“This is a good race for me. I am very happy with my swim and on the bike I just tried to save some energy for the run, I needed it for the battle against Dorian (Coninx) on the run”, said Montoya. “Three years ago I won the Junior World Title and now the U23 World Title, I just hope that one day I win the Grand Final. When I saw Luke (Willian) get his penalty, Dorian and I looked at each other and then I tried to attack. I wasn’t very confident, as my legs were aching, but I managed to do it”.

Coninx claimed the silver for the night as he just fell to Montoya in the final metres. The Bronze was then earned by Aussie Luke Willian, who despite having to serve a 15-second penalty, still managed to step up onto the last spot on the podium.

“It was very hard, but it’s the kind the race I like a lot. I won here three years ago and finishing second is worst than winning but I’m happy with this. I worked a lot on the bike with my training partner, Leo Bergere, but I kept feeling better and better. After the swim I felt really bad, but I thought that I had to give it a try and see how I was feeling. At the beginning of the run, I had cramps, but it got better after 2 kilometres, and It was then when I started to think that maybe it was gonna be OK. I just missed a bit more of energy at the end. We knew from almost the beginning that Luke (Willian) had to serve a penalty, when I checked the penalty board on the first lap I saw his number and I kept that in mind for all the running. I tried to sprint Raphael at the end, before the corner, but he was stronger than me. A silver medal here is just amazing,” Coninx said of his performance.

After weather conditions left all races to be delayed by one hour, the men’s U23 race had an evening start, which meant the sunset would meet the finish line. Lining up to take on the standard-distance course, the large roster of 78 men dove off the pontoon for two 750-metre laps in the Mass river.

Leading through lap one and two, Mark Devay (HUN) exited the waters first. He was followed by a larger pack of about 10 men, which behind them was an even larger pack containing the majority of the field.

Heading out onto the bike, a tight group tallying around seven men formed. However before the first lap was over, the lead pack had gained a few and now tallied about 15, containing names such as Montoya, Coninx, Leo Bergere (GRA), Willian, Gordon Benson (GBR) and Jonas Schomburg (ITU).

Halfway through the discipline, it was the French, Coninx and Bergere, who decided that a change was needed and they broke away from the pack. The duo continued to ride together, but the gap was only a small, only about 20 seconds, as they dismounted to go through T2.

While the local crowds were ecstatic cheering on their athletes, Dutchmen Jorik Van Egdom and Menno Koolhaas had an over three-minute deficit off the bike, which put them out of the running of earning medals in their home nation.

The podium then was determined on the run. At the start Bergere and Coninx remained strong to hold onto their lead, but the strength of Montoya and Willian was too much and at the halfway point the two who were in the chase was now the leading men.

Willian charged through as a real threat for gold, but due to a mishap with his swim cap in the first transition, he was forced to serve a 15-second penalty. After stopping before the bell lap, Willian was passed.

Montoya and Coninx surged on side by side and in a last all-out sprint to the finish line, Montoya just edged out Coninx to seize the crown and another world championship honour. Montoya’s run split was the fastest of the day, aiding in his win.

Coninx then fled to the line for the silver and Willian followed behind just 20 seconds later.

“The course was very technical and when Dorian and Bergere broke away we worked very hard trying to close that gap down. Then on the run, I just tried to work hard and catch the guys. I knew that I had to serve a penalty since the first time I went through T2, but it’s part of the racing. It did affect me, the last two laps I was just pushing really hard, and then when I stopped, I was just standing there watching them get away, and that was pretty hard, and I was also nervous that someone might run past me. When I left the penalty box I just tried to close the gap as much as I could but I just couldn’t get there,” said Willian.

A strong finish in the event was Israel’s Sachar Sagiv who finished fourth and had a breakthrough performance in the bike and run legs.

Showcasing a strong bike and an even stronger run, USA’s Tamara Gorman finished first to become the 2017 U23 Women’s World Champion in Rotterdam. Along with her on the podium were Portugal’s Melanie Santos, who crossed the finish line in second, and Brit Sophie Coldwell who grabbed the bronze medal.

“I feel so thankful, I can even believe that I won this race. I took a year off triathlon to focus on running, and this is my first summer back. I really wasn’t expecting that”, said Gorman, who also won the World Junior title in London 2013. “The bike course was a little tricky with all the turns, but once I got onto the run I just felt wonderful”, she said.

Heavy rain welcomed the u23 women’s field on the swim start pontoon, giving the wetsuit swim an extra level of challenge. After the two-lap swim, just like we had seen in her World Triathlon Series appearances this year, Brazil’s Vittoria Lopesdominated in the swim and was the leading woman out of the water after the two laps on the Maas river.

Just 13 seconds back, Coldwell trailed through the first transition and led the pack entering the bike course. And in the first technical section that brings the women back to the second transition area, leaders formed tallying 13 women. In the pack, names such as Leonie Periault (FRA), Santos, Coldwell, Nicole Van Der Kay (NZL), Julie Derron (SUI), Gorman and Georgia Taylor-Brown (GBR).

The 13 women worked really hard during the 40 kilometers of the bike course to create a sizeable gap between the chasers. The lead widened and widened against the women in the chase pack, such as Emma Jeffcoat (AUS) and Cassandre Beaugrand (FRA). Upon entering T2 after conquering the 40-kilometre bike, the gap had reached over the 2-minute mark.

And it was then when the race was to be decided, with an unstoppable Gorman pushing hard on the run since the first metres, and leaving one by one all behind. On the first lap of the 10-kilometer run, Coldwell was still in the lead, followed by Elise Salt (NZL), but halfway through Gorman was already leading the field.

Behind her, an impressive Santos, who had one of the fastest runs of the day, to finish second and earn for Portugal the first medal of the Grand Final. With Taylor-Brown having to serve in the last lap a 15-second penalty after discarding her swim cap outside of the box, the race was over for her and couldn’t catch up her teammate, Coldwell, who finished third, while Taylor-Brown was the fourth on the finish line.