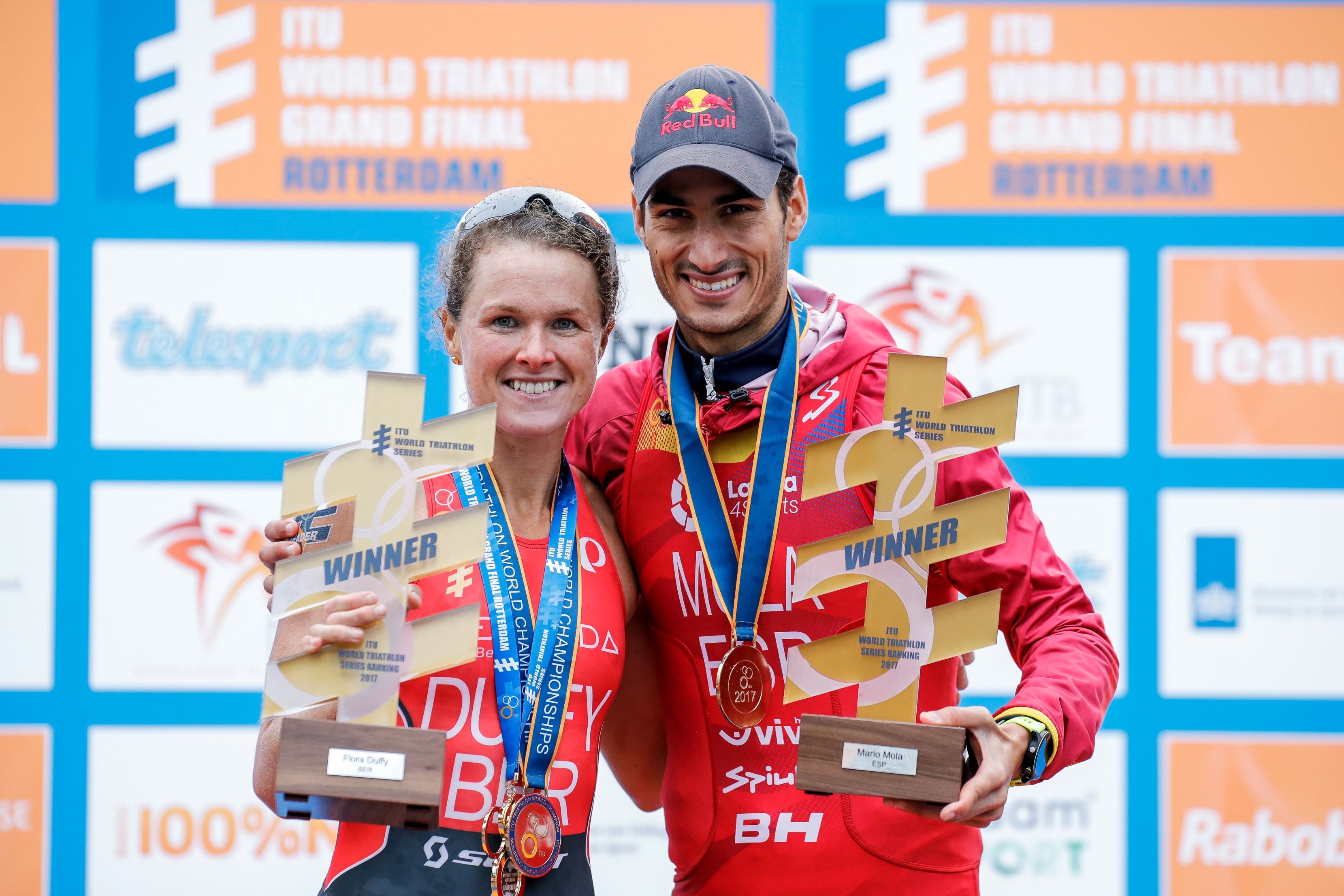 In what looked like a near perfect race outcome that suited her strengths, Flora Duffy (BER) had a dominating performance at the 2017 ITU World Triathlon Rotterdam to claim victory and reclaim her ITU World Championship title for the second year in a row.

Making a name for herself as one of the most consistent swim, bike and run athletes, Duffy’s Grand Final gold ended a season that saw her claim six WTS races in the year, that all aided in her repeat world honour.

Duffy said of her win: “I am pretty reluctant to ever say you can have a perfect race, but I would say today went just how I wanted it to. I had a great swim and set myself up perfectly for the bike. I tried to play it safe on the bike because there is so much on the line and then on the run I felt pretty strong, so I wanted to go for it. Yeah, it was a great day. I just try to make it a swim, bike and run. Not a swim, get through the bike and then onto the run. So maybe it is forcing everyone to be really good at all three, but that is how I want to race a triathlon, I just love to race.”

Coming in second place in the race was USA’s Katie Zaferes, who also had a strong overall performance from start to finish. With the result, she pushed her way into the third overall spot in the rankings to take the final place on the world championship podium; a career first for Zaferes.

“I am so excited. I told Flora (Duffy) when I finished that ‘you might have won, but I feel like I did.’ I am one more up from last year, so I just keep making my way,” she said of getting third in the overall season.

The bronze medal then went to Jessica Learmonth (GBR), who earned in Rotterdam her second WTS medal of her career.

Learmonth said, “It was hard from start to finish to be honest. I didn’t feel very comfortable throughout, I know I led out of the swim and stuff, but on the bike Flora (Duffy) and Katie (Zaferes) were so strong I was really struggling. I didn’t know how the run was going to go, I felt alright but my back was really stiff and the back of my calf hurt towards the end, but it was just a battle to hold on.”

One of strongest performances of the day came from Aussie Ashleigh Gentle, who despite being down by over three minutes on the bike, had the run of her life to finish sixth, which was the exact position needed in order for her to maintain her second-place spot on the world championship podium. The silver overall Series trophy was a career first and best for Gentle.

“I am very pleased. I didn’t really know what this year would bring. I had a lot of changes, I relocated to Wollongong to work with Jamie Turner, I had my longest stint in Europe this year doing more WTS races than I have ever done before so I am just absolutely thrilled with getting second,” Gentle said.

Despite the rain that occurred for the majority of the day, as the women lined up to start the sky began to clear and they were met with clear weather conditions.

Duffy, Learmonth and Zaferes utilized time from a swift transition to get out ahead. Mimicking the situation that happened in WTS Stockholm just weeks earlier, the three rode as a leading trio and worked on gaining as much ground on the bike as they could.

By the time the bike reached the lap section of the course, the trio had a lead of 30 seconds over a chase group of seven women that had formed. These seven, included Joanna Brown (CAN), Jodie Stimpson (GBR), Kirsten Kasper (USA), Taylor Spivey (USA), Summer Cook (USA), Alice Betto (ITA) and Rachel Klamer (NED).

While the seven tried hard to close the gap, the strength and speed from the leaders was too much and the margin only increased. Heading into T2 that gap was close to two minutes.

A second larger chase group also saw big names in the bunch, such as Gentle and Nicola Spirig (SUI), who was racing in her first WTS race since having a baby only months ago. This group however had an over three-minute deficit going into T2.

The three-woman breakaway was the perfect set-up for Flora to then hammer away on the run. She took off once on her feet and then it was over from there.

She took the opportunity to gain the ground she needed to bring it home and get the finish tape and the world crown.

From there the only deciding factor who would finish out the podium. Zaferes finished around 40 seconds after Duffy, which bumped her ahead of Andrea Hewitt (NZL) in the rankings.

Learmonth finished third for the race and then Gentle had one of the fastest runs of the day to get her into sixth place and keep the second-place spot in the rankings.

Keeping the world title for the nation of Spain for the fifth year in a row, a third-place finish at the 2017 ITU World Triathlon Grand Final Rotterdam was enough to grant Mario Mola a back-to-back ITU World Triathlon Championship crown in a season-best performance. With the repeat title, Mola became only the second man in ITU history since the inception of the WTS to ever win two-straight world titles.

Winning the Grand Final race gold was France’s Vincent Luis, who claimed his first WTS victory of the season. Luis’s win came from a dominating and dramatic run effort, after breaking away from a powerful lead pack in the final metres to seize the event gold.

The silver medal went to Kristian Blummenfelt (NOR), who once again, had one of the best run performances in the race to fly past the competition that he ran with stride for stride for the whole ten-kilometre course. With his second-place finish, he advanced 271 points over South Africa’s Richard Murray to take the third spot on the overall World Championship podium.

Crossing the line in fourth, Javier Gomez Noya (ESP) secured enough points to guarantee his place in the rankings to be named second overall in the season and the runner-up world champion.

Mola said of how it sounds to be a two-time World Champion: “It sounds great. I can’t describe it with words. You are always nervous before a race, no matter what the situation or where you are, I am sure you are going to have those nerves in order to perform well. I knew I was in a good situation, I wish I could race every year with these kinds of points going into the Grand Final and this type of situation, but I knew I had to race very well or else it was not going to be easy. But it was the title, so that is what I tried to do.”

Luis commented on his season best race victory: “I didn’t expect that. It was a tough year, there was a lot of tough up and downs, a lot of downs. I couldn’t imagine having a win at the Grand Final. I spent like two or three months of this year injured so I could not work, I just can’t believe it. I just worked so hard that it feels amazing.”

After crossing off the junior men and U23 women races earlier in the day, the elite men prepared to battle it out on the course for the first set of elite grand final honours. Rain and cold weather was touch and go throughout the morning, so by the time of the elite men’s start the conditions caused a wet course. However, the rain did let up in time for the starting drum.

Early strategy saw that all of the Spaniards position themselves on one side of the pontoon, with Jonathan Brownlee (GBR) choosing to dive in on the opposite side.
Richard Varga (SVK) led out of the swim in the first lap, but the first 750 metres didn’t do much to space out the field. Brownlee and Gomez remained among the top of the field in the waters, trying like ever to remain out in front.

Varga continued his lead after lap two as well and collected his 33rd time in his career that he exited the waters as the swim leader.

The rest of the field followed not far behind, including Brownlee who finished only eight seconds back, despite losing his swim goggles on the second lap. Mola found himself 26 seconds back, which was the best swim of the season for the Spaniard.

Heading out onto the bike, a group of 15 men including Brownlee, Gomez, Marten Van Riel (NED), Ben Kanute (USA), Wian Sullwald (RSA), Varga, Eric Lagerstrom (USA), Pierre Le Corre (FRA) tried to get an early lead. But a large chase pack that was being handled by Blummenfelt caused a merging of the two groups, so that by lap two a big peloton was formed containing 33 names and all the big players in the mix.

Without any successful breakaways, the whole pack entered the second transition together. Putting pedal to the medal once on foot, Brownlee and Blummenfelt blasted away to try to get the edge. While the two, who come from regions where the cold weather climate works to their favour, attempted to keep their lead, it took just a couple kilometres for Gomez and Luis to catch them and create a small group of four men.

Mola then came charging through in sixth place. Knowing it was a world title on the line, it was only moments before Mola then pushed his way right into the lead pack of four. From there his title was almost secured, since he only needed to finish in the top five to lock in his repeat world crown.

The pack surged on, with Murray running in sixth but unable to catch the leaders. Then in the last lap Luis started to change the pace and he broke away from the others in the final moments to claim the Grand Final race win.

Blummenfelt then came just seconds after, kicking in joy with the result that granted him the final spot on the overall Series podium.

Blummenfelt said, “It is obviously a great feeling. That was the goal overall before my season, to get on the podium overall. I started not as I wanted with the DNF in Abu Dhabi and then some not 100% performances, so at the beginning of the year I didn’t know how easy it would be to get on the overall podium. I just have been training well and believing in the process, so it’s good.”

Mola then followed in for third, smiling as usual knowing he could claim a second straight world crown.

Finishing fourth then in the day was Gomez, who earned another Series podium spot. “I am very pleased with this year, I was focused on different distances and still managed to get the silver medal,” he said.