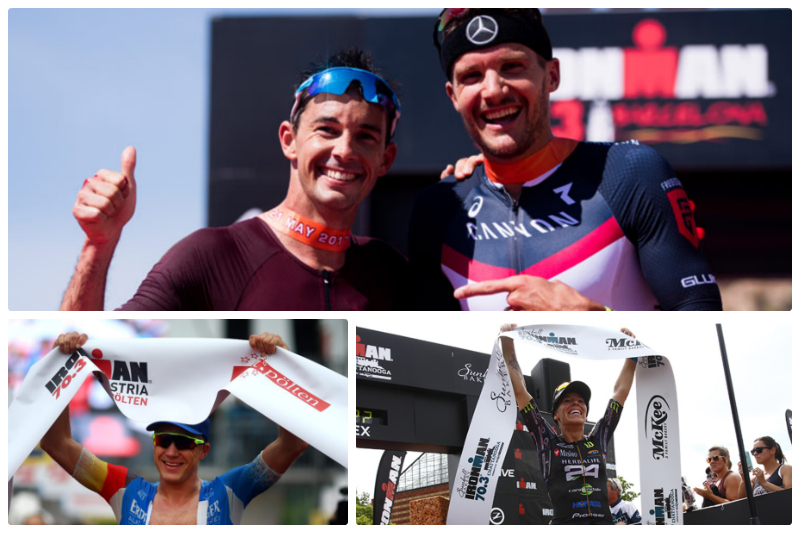 It wasn’t really a question for the crowd at the IRONMAN 70.3 Barcelona whether Jan Frodeno, the two-time IRONMAN world champ and 2008 Olympic champion would take the win. But this was not an easy win to take for Frodeno, because the race was tough—thanks to his training buddy Nick Kastelein (AUS), who pushed really hard in each discipline, and Bertrand Billard from France who hammered early on the bike.

Spaniard Francesc Godoy managed the fastest swim in 22:47. He was only a second quicker than Frodeno, and both were sprinting at the front of a strong group out of the water. A few kilometers into the bike course, Billard attacked and moved to the front. Through half of the tough course, he had opened up a gap of a little more than 3 minutes on the top favorites. When the leader reached T2, he was 4 minutes ahead of Frodeno, it was way to less to hold one of the best runners off. After about half of the run, Frodeno made the decisive pass and ran straight to the win in front of his friend Kastelein and Russia’s Ivan Tutukin.

Emma Pallant made her way to the victory on the run course, too. On the bike, it was Catherine Jameson who stormed away like her British colleague Lucy Charles had done the day before winning the IRONMAN Lanzarote. Jameson had the best swim in 24:34 and opened up a gap of 3 minutes on the first 20 kilometers of the bike. But the longer the race was going, the smaller Jameson’s advantage seemed to be. She led women’s race into T2, but after about 5 kilometers of the run, Emma Pallant moved powerful into first place. The former track runner ran the victory home in front of another strong British athlete, Natalie Seymour, who ranked third at Pays d’Aix the week before.

Thunderstorms threatened in Chattanooga Sunday, but the weather held to allow the athletes to hit the course unencumbered. Newbie Antoine Jolicoeur Desroches (CAN) took the race to his competitors early with a big swim gap and turned it into a huge lead off of the bike with a solo effort off the front. It was all for naught though as Matt Russell was able to pull that gap back in dramatic fashion with just two miles to go. Adam Otstot crossed second and Antoine held on for third.

In the women’s race, we had no surprise as our defending champion Heather Jackson (USA) got to the front early, just 10 miles in, erasing a two-minute deficit to take the lead. She continued to hammer away on the bike with Sarah True (USA), Kristen Merchant (CAN) and Jackie Hering (USA) the only women to keep within striking distance. In the end, Jackson’s strength was too much for the chasers as she held even pace throughout and crossed the line with two and three minutes’ margin of victory over True and Hering to defend her Chattanooga title. It marks a good track for Jackson building towards IRONMAN Boulder in just a few weeks’ time.

Nils Frommhold and Laura Philipp crossed the finish line with huge smiles, despite the poor weather at IRONMAN 70.3 St. Poelten. Frommhold was the first of three German men on the pro podium, and Philipp dominated the race with a 10-minute lead.

In the men’s race, things unfolded as expected. Andreas Boecherer, Frommhold and Maurice Clavel were among the fastest guys in the water and started battling out each other early on the bike. The three athletes, who all live in the same area in the South of Germany, broke away from the rest of the field, with only Austria’s Thomas Steger able to ride a similar pace on the wet roads. Frommhold and Boecherer, who had won in St. Poelten in the past two years, dropped Clavel early and reached T2 side by side. “I knew that the first kilometer would be decisive,” explained Frommhold later why he more or less sprinted into the half marathon. Once he had opened up a small gap, he was off and away to a 2-minute lead while Clavel made up time on Boecherer especially on the last kilometers of the run to finish a minute behind the 2016 champ in third.

Philipp led women’s race from start to finish. After the swim, her advantage was only about 20 seconds, but she had no issues to pull away from her chasers on the wet bike course. She had a lead of about 5 minutes over Yvonne van Vlerken (NED) and Austria’s Lisa Huetthaler when she came off the bike, and Philipp knew about her running strength. As she did one week before in Mallorca, she ran straight to a great victory thanks to a superb split while van Vlerken took runner-up position ahead of Huetthaler.

Trending: The Case for Wider Tires