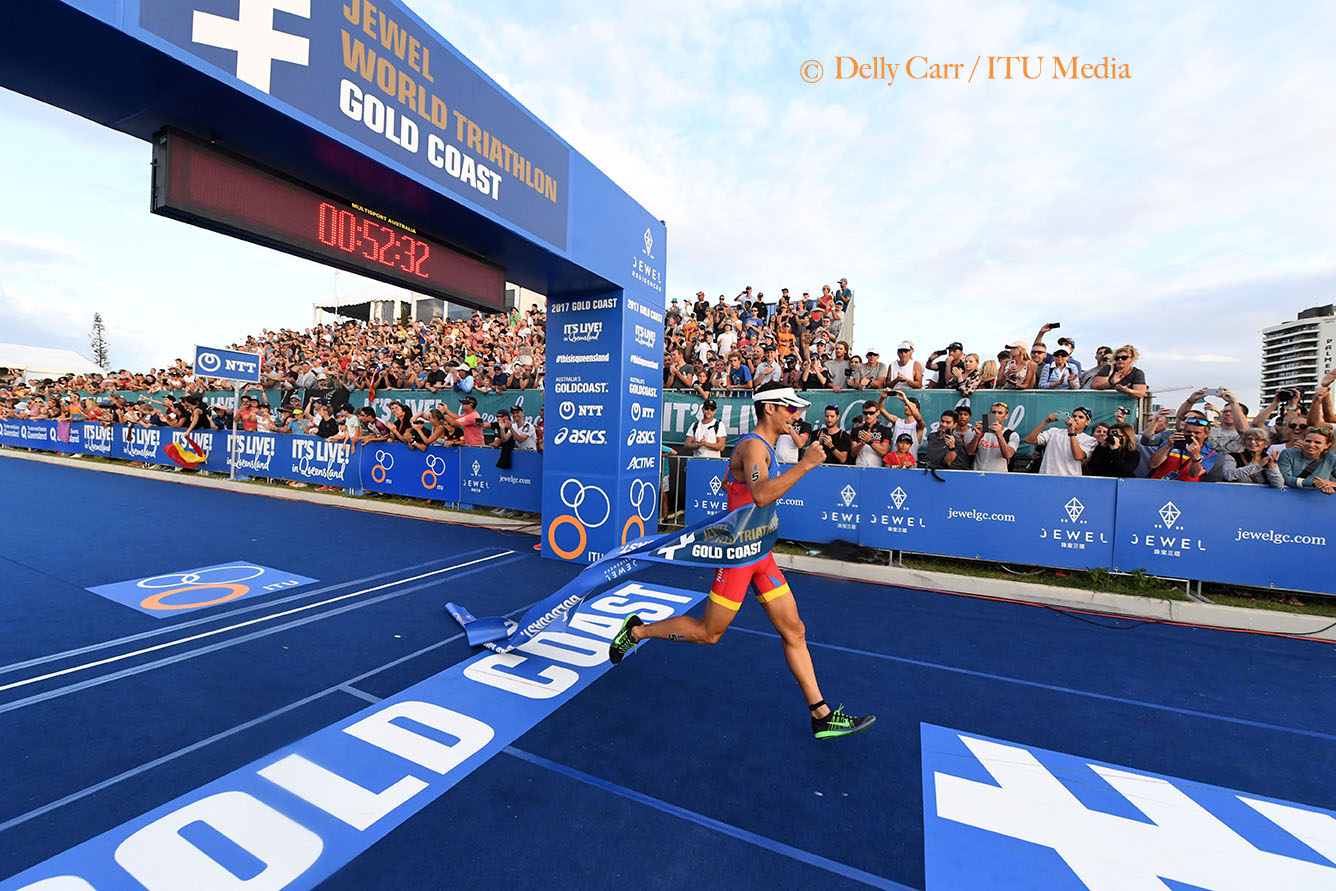 Australia’s Gold Coast has been a happy hunting ground for Mario Mola, and the Spaniard continued that run on Saturday when he took out the 2017 Jewel World Triathlon Series Gold Coast event.

Mola has now won three times on the Gold Coast, including the 2009 ITU Junior World Champion title and last year’s World Triathlon Series event. His worst result has been second in a world triathlon series event, in 2015.

On Saturday the race came down to the final 5km run, with Mola locked in a battle with fellow Spanish athletes Fernando Alarza and Javier Gomez Noya, and training partner Richard Murray. But in the final few hundred metres Mola pulled away from Murray to take his second consecutive Gold Coast win, in a time of 52 minutes and 35 seconds.

“It was a very tough race as usual, but with the sprint, Richard, Fernando and Javi they were all on fire. I had to give 100 percent today to get this win,” Mola said. “Every race is a new opportunity and a different opportunity to give our best and to try our best. In Abu Dhabi I do not think I was less fit or more than I was today but in this racing these guys are very good and if you don’t have your best day you go from first to eighth to twentieth, that is racing. So to get a good result I am happy to have a good performance.”

Earlier in the day, Henri Schoeman was first out of the water, and a small group managed to get away on the first lap of the bike, including Schoeman, Javier Gomez Noya, Ben Kanute, Trent Thorpe and Tayler Reid. But the hard-working chase caught up with them and the majority of the field came together fairly quickly.

Throughout the four-lap 20km bike a few athletes tried to make a break. While Tony Dodds effort wasn’t successful, Australia’s Ryan Fisher did make his stick until the second transition. But his 16-second lead wasn’t quite enough to hold off the men behind him.

After overtaking Fisher, it was a group of five that made a break, including Jacob Birtwhistle, Gomez, Alarza and Murray. Birtwhistle dropped off the back with just under 2km to go, and then shortly afterwards Mola and Murray made their move. Murray finished strongly for second, but said he left it all out on the course.

“I think it is almost compared to Rio, I gave everything I could and Mario was like a surging machine out there, like a car going in sport mode every twenty seconds! But I responded as much as I could and then I was on the rivet for maybe the last u-turn all the way back near transition and I stayed with him a few times but I did all I could,” Murray said.

“I like to bring it and go flat out from the gun. I was very happy with my swim, I looked back towards that and I might be unhappy coming second tomorrow and I raced last weekend, but I gave it everything that I could and I can’t ask for more.”

The medal for Alarza continued his strong start to the season, after fourth in Abu Dhabi.

“I am very happy with the bronze medal, the race was very hard, very hard,” Alarza said. “Mario held on for the whole 5k in the first position and for me in the third kilometre I was dead. I was with Javi but finally I won and I am happy with that.”

Gomez Noya’s fourth finish was enough for him to retain the World Triathlon Series leader title, while Birtwhistle’s fifth place meant he locked in an automatic qualification spot for the Australian team at next year’s Commonwealth Games. Behind him was another Australian in Luke Willian, who won last month’s Mooloolaba Cup, who recorded a sixth in his first WTS start.

It might have taken her six years to get back on top of a World Triathlon Series podium but Andrea Hewitt (NZL) now has two from two to start the year after she claimed the 2017 Jewel World Triathlon Gold Coast title in Australia on Saturday.

While her first victory of the year came from an epic sprint to the finish on the blue carpet in Abu Dhabi just over a month ago, her second victory came through outrunning her competition from the second transition, on the first sprint distance course of the season.

“I knew my running was good and that is why I went out at that pace, but you never know how the race is going to go and today I just ran a 5k at my pace and it was good enough to be out in front, so I am really happy,” Hewitt said of her day’s performance. The win also came after the Kiwi had just celebrated her 35th birthday the week prior to race day.

“Last week was my birthday, but age is just a number isn’t it?  It just all comes down to the training, today my swim and bike wasn’t up there but then I had the legs on the run so that is just how triathlon goes,” Hewitt said.

Taking the silver medal was Australia’s own Ashleigh Gentle, who with the podium also met Triathlon Australia’s qualification criteria for a team spot for the 2018 Commonwealth Games. The Games will also be hosted in the Gold Coast at the same venue, and the first official medal awarded at those Games will be at the women’s triathlon event.

“It feels really good, I guess for me a huge goal of mine moving on from Rio was to one day show up to a one-day race where you have to show up and perform and I did that today so I am really happy,” Gentle said. “It’s a sprint race, it is so fast from the get-go and it is something I have not had much confidence in before so I am really happy that I was just able to take what the swim was, get on the bike and work hard. And once it came down to a run race I wanted to go out hard and see if I can hold on.”

Finishing with the bronze was Japan’s Juri Ide, who made a comeback to the WTS podium for the first time since 2014.

With the sunny venue, the Gold Coast made for the perfect backdrop to debut the first sprint distance race of the season. With the wind providing a few extra waves, the one-lap 750metre swim left little time to fall behind.

Spaniard Carolina Routier once again led out of the water and into the first transition. While many were right at her feet, Hewitt fell behind and exited about 30 seconds down alongside Great Britain’s Jodie Stimpson.

Onto the bike, a small group of ten women formed after a swift transition. However after the first lap, Stimpson once again came from behind and pulled a larger group with her to form the lead pack tallying around 30 women. The U.S. once again put forth a strong showing as up to six women were among the lead group, including Katie Zaferes, Kirsten Kasper, Taylor Spivey, Renee Tomlin, Sarah True and Summer Cook.

While the large group pedaled on, it included some strong contenders such as Gentle, Ide, Charlotte McShane (AUS) and Ai Ueda (JPN).

The group of 30 carried into the second transition, which caused a busy and hectic zone. But it was Hewitt who wasted no time as she gunned out of the gate and blew into the lead, a lead she never lost. Almost effortlessly Hewitt held onto her stride and finished onto the blue carpet, this time with a little more ease to take home her second straight WTS victory.

While the five kilometre run saw Gentle and Ide neck and neck, it was Gentle who pushed at the end to gain the silve ahead of Ide in Bronze.

Behind in a rush for fourth, Zaferes, Tomlin, Ueda and Kasper came trailing in behind.