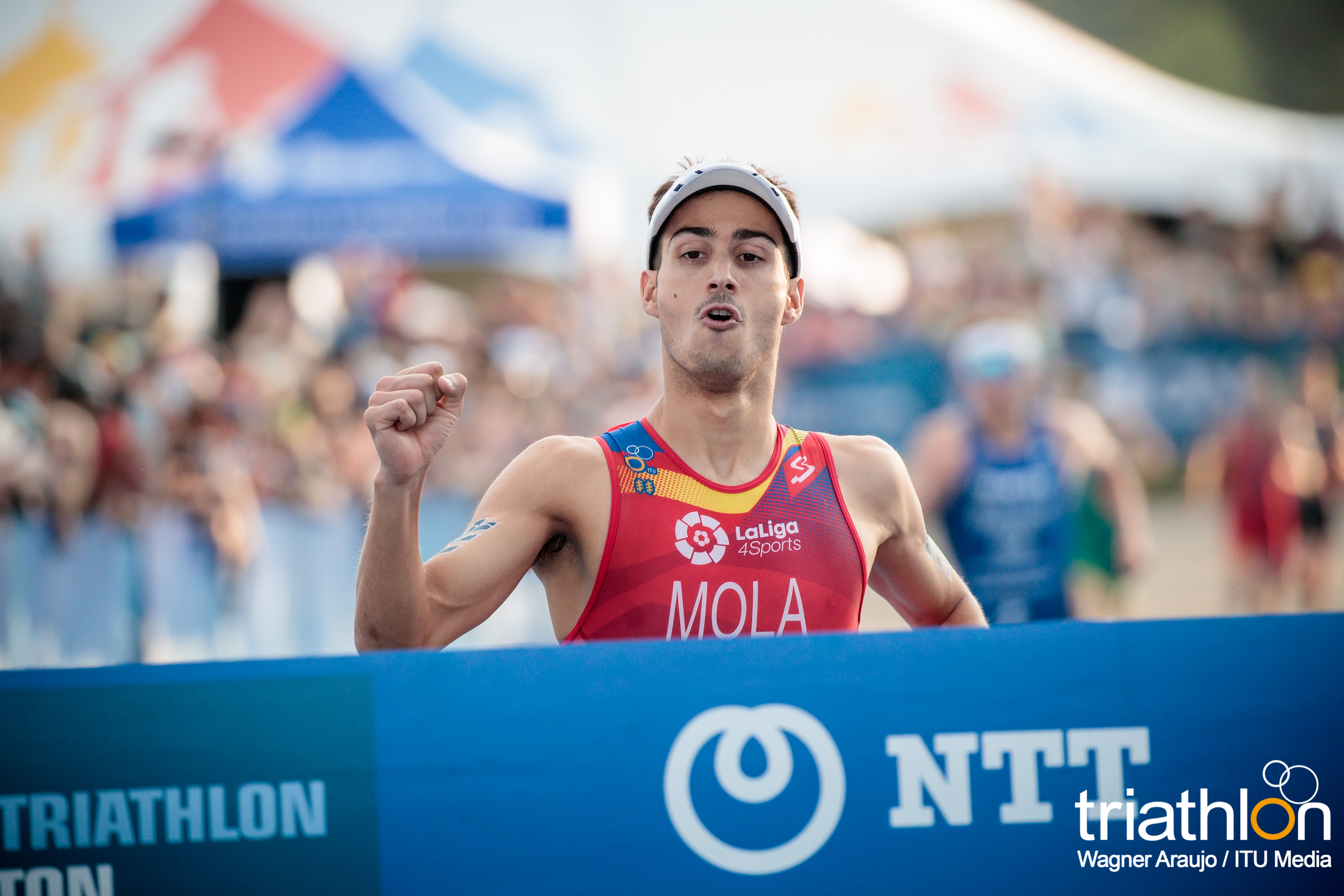 In an exciting early evening showdown in Edmonton Mario Mola (ESP) surged ahead of Kristian Blummenfelt (NOR) in the final lap of the run to capture his fourth consecutive WTS podium. Blummenfelt showcased his tremendous power twice surging ahead of Mola in the bell lap before dropping back for a second place finish.

“Kristian gave me one of the toughest runs. Every time I go out I try to race my best, and he made me work. Maybe it was harder than it looked,” Mola remarked. “This race is another step forward. But until I cross the finish line in the Gold Coast in the next couple weeks, the race towards the World Championships is not over.”

Vincent Luis (FRA) and Jonathan Brownlee (GBR) lead out of the 750m swim in the clear and calm waters of the William Hawrelak Park lake, with Marten Van Riel (BEL), Marco van der Stel (NED) and Tayler Reid (NZL) forming a lead pack on the six-lap bike course.  Halfway through the bike, the chase pack caught the lead, with Kristian Blummenfelt and Ryan Fisherworking hard to bridge the gap and a massive group converged together moving into transition.

“I thought I had a chance on the run. I couldn’t stay behind him (Mola) I had to try and kick up the pace,” said Blummenfelt.  On some of his recent issues with racing he says, “it felt good to be standing on the start line for a race without problems.”

Behind Blummenfelt was a cluster of runners including early leaders Vincent Luis (FRA) and Jonathan Brownlee (GBR). Fernando Alarza (ESP) and Aussie Jacob Birtwhistle ran with the group of men until the last 500 meters when Birtwhistle broke ahead to sprint himself into a third-place finish.

Birtwhistle shared his thoughts on finding another gear to finish. “I knew it wasn’t over until I crossed that line. I wasn’t given a big gap at the end, but I had to try to use my kick. I would rather use it to challenge for the win, but today I had to try to use it to my advantage. There is so much that can happen, even in a sprint, it isn’t over until we cross that line.

Birtwhistle found the finish line for his third WTS podium of the season. “I wanted to swim and bike to the best of my ability. I am pretty happy with where things are sitting (in the overall standings). I missed a few points early on in Bermuda and Leeds, so I am trying to backend my season to finish off well. I need to perform in the last two events.”

See also:  A Look Back at The Swiss Epic Mountain Bike Race that Marked the First Step in The Ironman Group’s Return to Racing

There are two races left in the 2018 season: WTS Montreal and WTS Gold Coast which also serves as the Grand Final.

On a warm Edmonton evening British athlete Vicky Holland broke the tape for her second win of the 2018 season in 2018 WTS Edmonton.  Holland led a fantastic day for the British squad, with her teammates claiming the third, fourth and fifth place.

Holland was a dominant force in the race from start to finish, coming out of the water in the lead pack, maintaining a lead pack position on the bike and breaking away from a cluster of athletes on the run to secure the gold medal position.

Holland is no stranger to Edmonton having raced there multiple times and winning the 2015 event in blustery and cold weather conditions.

“I was really riding high after Leeds, and I put in a really good block of training. It was unfortunate I had a crash in Hamburg, and I felt very angry and frustrated,” Holland says reflectively. “I take a race at a time. I try not to think about leading the series too much. Katie has had such a strong season, she hasn’t messed up any races.”

Coming in behind Holland was Australian Ashleigh Gentle, who has seen the podium in Mixed Relay this year but not in an elite women’s race.

“My season started with a crash in Abu Dhabi and then a fourth-place finish in Yokohama. I am thrilled to be here in second place. Before the race, I recognized that this course is one that might suit me, that hill is really tough.” Gentle laughs. “I was really happy to catch on to that front group.”

Coming in third, fourth and fifth respectively was a trio of British athletes that included Georgia Taylor-Brown, Jessica Learmonth and Jodie Stimpson. Georgia ran a strong to pull away from the Learmonth and Stimpson for the final podium spot.

Taylor-Brown, who is having a breakout season of elite racing, says she was surprised to find herself in the third spot.

“It’s amazing to be up here (on the podium). It was scary heading into transition first, I wanted to get out of there and go hard.  There was a point where a break started happening and I thought, ‘I need to go and bridge back up to the leading two’.”

The race started with American Summer Cook leading the 750m swim on William Hawrelak Park, showing that she is one of the stronger swimmers in the field, only followed by British triathlete Learmonth and Vittoria Lopes (BRA). The three of them crossed the long transition maintaining a small gap and tried to break away on the first meters of the bike course, but Cook and Lopes realised pretty soon that they didn’t have the legs to confront the hill pushing hard, and in the first lap the three of them were engulfed by the chase group.

With some strong riders in the lead pack, including the four British, Katie Zaferes, Taylor Spivey, Gentle, Rachel Klamer or Andrea Hewitt, they managed the six laps with some technical turns quite easily and without major problems.

And the big group entered the second transition together, with all to be decided in the last 5km run. Under the Edmonton sun, Holland led the group out of transition and started dropping athletes. Klamer, Cook and Hewitt couldn’t keep up with the frantic rhythm in the first kilometre, and only the four Brits, Gentle and Zaferes were able to maintain their hopes for the podium places. Halfway through the run, Zaferes started to struggle to keep up and fell behind a few meters. One kilometer after, it was Stimpson and Learmonth who fell behind as well.

With the leading trio looking fresh in the last kilometer, it was finally Holland who had the legs to break away from Gentle with 500 meters to go, a final push that the Aussie was not able to follow, to cross the finish line in the first place, followed by Gentle, Taylor-Brown, Learmonth and Stimpson. Zaferes, who finished in the sixth place, is still the leader of the Series.

Winners of the Free Slots to Clark Triathlon Classic-Philippines Announced!