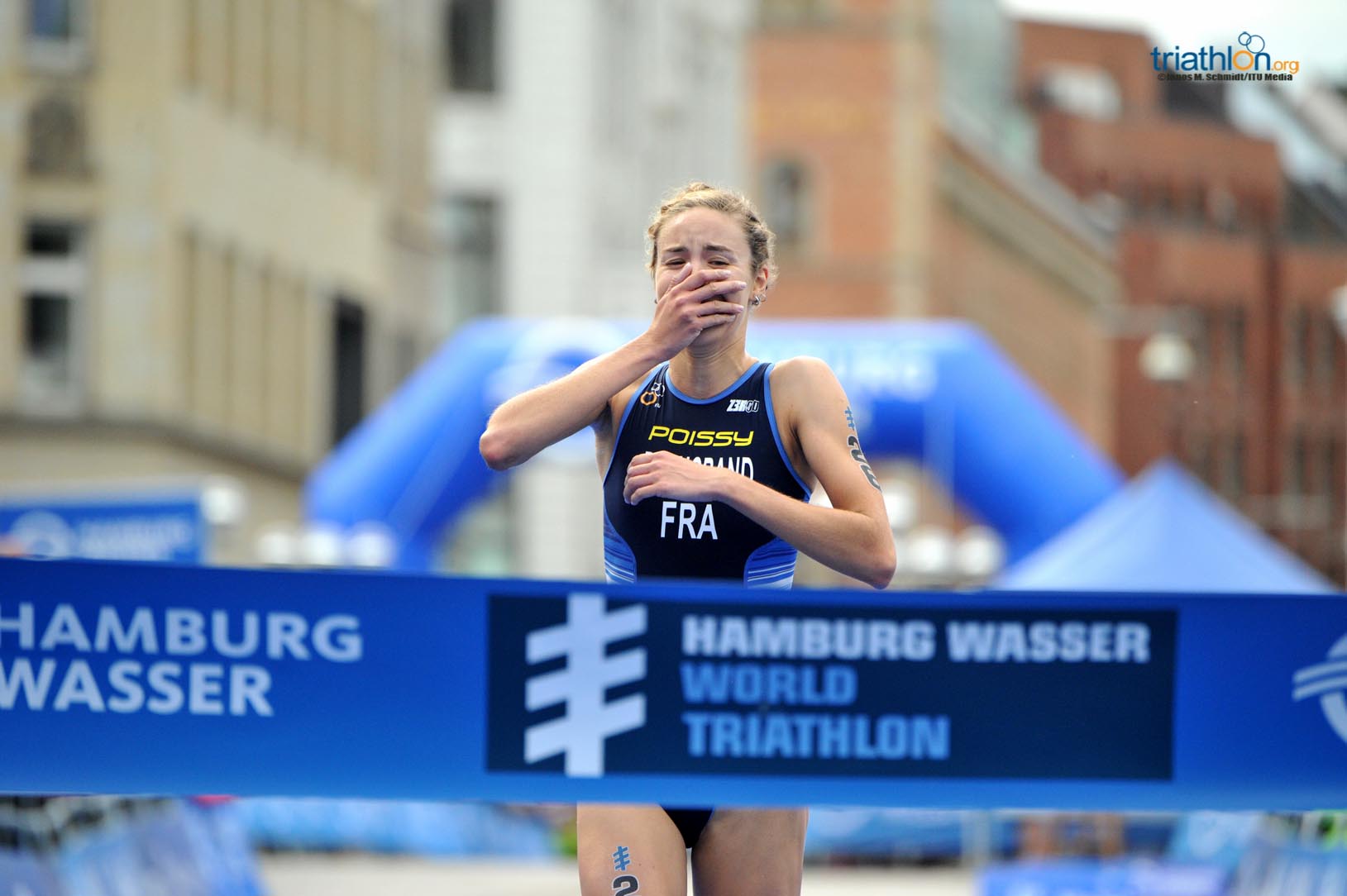 Mario Mola (ESP) made it a remarkable third straight WTS Hamburg victory on Saturday afternoon, delivering a superb run to take the tape once more in Germany. It had been a strong three-deep group of Johnny Brownlee(GBR), Vincent Luis (FRA) and Kristian Blummenfelt (NOR) that carved out a solid lead on the bikes, but Mola timed his attack to perfection as first he shut down the gap then created one of his own with an impressive 13:59 run to finish ahead of Luis in second and Richard Murray (RSA) in third.

“I saw that the leaders were running fast and working well and there was a gap opening up but the atmosphere is unbelievable here and I just love this course,” said Mola afterwards, still Series leader with two races left ahead of the Gold Coast Grand Final. “Im happy how things are going right now but i know from experience that nothing is over until it’s over, so i’ll keep up the work and hope for the best come September.”

It was a fast pace being set from the first strokes of the swim, and one that would eventually see Mola shave more than 40 seconds off his winning time from 12 months ago. He was already well placed as Vincent Luis, Belgium’s Martin van Riel and Richard Varga (SVK) led out of the water and up the ramp to T1, and the lead group was compact coming out of transition.

Norway’s Blummenfelt was ten seconds back at that stage but wasted no time in taking control over the early stages of the bike, forcing the breakaway with only Brownlee and Luis able to go with him. Meanwhile, behind, a huge peloton took shape, including the ever-dangerous Murray, Mola and Australia’s Jacob Birtwhistle.

That remained the story for much of the 6-lap bike, the gap to the ever-stretching peloton reaching 23 seconds by the bell, but despite the lead trio exiting T2 together, Blummenfelt soon paid the price for his exertions, stomach cramps taking him right out of contention at the start of the run.

Meanwhile Mola and Murray, who had done battle over the final kilometres in Leeds just weeks before, had the lead pair firmly in their sights. First, Murray put down the hammer to close the gap and pile on the pressure, then Mola seized his moment and attacked hard towards the halfway point.

For Murray, it looked like that effort might have proved too much as Mola soared and Brownlee held strong, but the story was far from over.

Soon the momentum swung again. Fortunately for Mola, who by now had some light between him and the chasers, the battle was taking place several seconds back. A gritty sprint finale meant it was to be Vincent Luis who managed to press his way into second, leaving Murray to hold off Brownlee and claim third place, Jacob Birtwhistle coming home in fifth place.

“When you are running against guys like Mario or Richard you have to be very aggressive if you want to be on that podium,” admitted Vincent Luis afterwards. “I had a great swim, and then tried to go full gas on the first lap of the bike but the guys were not very cooperative. Blummenfelt and Johnny were pushing really hard. In the run, I know Richard is pretty fast on the first 2.5km, so I was moderating myself in the first lap to save some legs for the final sprint and I’m very happy with second place here.”

“I am certainly satisfied with my performance today,” said Richard Murray. “I had a pretty awful swim, I was a bit confused and stopped for a couple of seconds but I managed to have a pretty good bike and a very good run. I love racing here in Hamburg, as everyone does, and my performances are getting better towards the end of the season, so I’m really looking forward to racing in Edmonton in a couple of weeks.”

From a starting line-up packed with seriously powerful podium potential, it was to be France’s surprise package, Cassandre Beaugrand, who left the field in her wake to earn a first-ever WTS gold at Saturday’s WTS Hamburg. An excellent swim saw the French National Champion in contention early on and she held firm in the 6-strong lead bike pack, before taking the race by the scruff of the neck and flying through the 5km run in a time of 15:48, Germany’s Laura Lindemann out-sprinting USA’s Katie Zaferes to win silver.

“I am so, so happy, I can’t believe,” said the delighted 21-year-old after the race. “I had a crash here last year, and to be able to win one year later is just amazing. I have improved a lot on the bike, and I pushed a lot today to be in the front group”

With such a strong field, including the returning double World Champion Flora Duffy (BER), Series leader Zaferes and Great Britain’s WTS Leeds winner Vicky Holland, it always looked like victory would require something special. Jessica Learmonth(GBR) and Summer Cook (USA) were the two first out of the swim, but Beaugrand, Taylor Spivey (USA), Vittoria Lopes (BRA) and Duffy were part of a sizeable swarm exiting T1.

An early fall from Rachel Klamer (NED) may have seen her lose touch with the lead group, but did little to deter her from another gutsy display on the bike. She then merged with a chase group that included Zaferes, Nicola Spirig (SUI) Vicky Holland, Kirsten Kasper (USA) and Emma Jeffcoat (AUS), but there seemed little hope of catching the front six.

See also:  How to Handle the Heat and Humidity in Triathlon

By the bell, that had all changed. The hugely experienced Spirig had pushed the pace of the chase group and both she and Zaferes, accompanied by the likes of Angelica Olmo (ITA), Kirsten Kasper and Non Stanford, were making up ground. By the time T2 came into view at the end of the six laps, Duffy, Georgia Taylor-Brown (GB), Learmonth, Taylor Spivey (USA), Beaugrand and Lopes had been caught.

As if to underline the momentum shift, it was Spirig who was first out of transition and onto the two-lap run, Australians Emma Jeffcoat and the in-form Natalie van Coevorden on her shoulder, Beaugrand dropping back to 16th and Laura Lindemann also struggling to negotiate T2 efficiently.

That merely seemed to dictate the French star’s tactics for the remainder of the race, however. Having put in a huge effort to get back among the leaders, Beaugrand clearly felt comfortable enough to maintain the pace and soon found herself alone out front.

Katie Zaferes and Nicola Spirig held firm, patiently awaiting their moment to pounce when the leader tired. That moment never arrived. Spurred on by her crowd, Germany’s Laura Lindemann locked in on the American’s shoulder as Spirig fell away, and it was an almighty sprint for the line as Lindemann won silver, bronze going to Zaferes with Spirig and Kirsten Kasper in fourth and fifth.

“I am very happy with second place, I didn’t expect it at all after the swim and the bike, because I had a really bad transition. But I just ran for my life and i’m very happy with the result. The crowds here are awesome, they really pushed me, and it felt like I was flying on the course with the cheers from the crowd.”

“I am so excited to come away with a podium in this race,” said USA’s Katie Zaferes. “When I came out of the water I was a bit further behind than I like to be, so being on the podium is a relief. The second group on the bike, the one I was in, was super motivated to catch the leaders and we did a really good job. When I saw Cassandre go i thought that we could close that gap but then it just seemed to be increasing. Winning the Series is on my mind now, and I hope third place here is the lowest I come in the rest of the races of the season.”

World Championship Triumph for Dapena and Frederiksen in Denmark