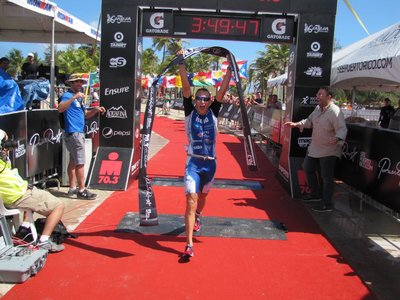 Paul Ambrose (AUS) and Taylor Reid (CAN) hammered out the fastest bikes on the day as the pair dismounted their rides accompanied by Ben Kanute (USA) and Andy Potts (USA). It was apparent from the get-go on the run that Reid, Kanute and Potts were the strongest on the day. Taylor grabbed the lead early while Kanute kept the Canuck in his sights. The pair were never separated by more than 25 seconds for the first half of the run while Potts was hanging back about 1:20 and likely shacking off the effects of a fall off his bike entering T2. In the closing half of the run, Kanute faltered and Potts capitalized on the situation. Taylor would grab the finish line tape for the win with Potts and Kanute making the podium.

Alicia Kaye (CAN) exited the water in third behind Helle Frederiksen (DEN) and Heather Lendway (USA), just six seconds back of the leader. Within the first mile of the bike, Kaye stormed to the lead and carried 4:44 advantage on Frederiksen heading into transition off the bike.

Kaye headed out on the run and struggle a bit while Stephanie Roy (CAN) was tearing through the field. Handing back time to much of the field, Kaye’s lead started to evaporate in the San Jaun heat as Roy made the pass into second late in the run. Kaye would eventually get herself across the finish line for the win but not before holding off a late charge from Roy who crossed the line a mere 30 seconds after the winner

Heather Wurtele (CAN) proved once again she has become one of the most dominate competitors at half-distance racing. The Canadian proceeded to put a stamp the race with an early hard charging attach on the bike leg that resulted in Wurtele surging to the lead around 20 km’s into the bike. Wurtele’s one minute deficit was flipped over to close to a seven-minute advantage on Allison Linnell (USA) Mexico’s Cecilia Perez as the women’s race reach the conclusion of the 90-km bike.

It appeared that Wurtele was measure in her effort in the open 5 km of the run as the gap the second and third floated back slowly. Then Wurtele leads to second third rapidly increased leaving the field to fight it out for second and third. Wurtele would claim the lead by a 9:28 winning margin to Perez and 11:21 over Linnell.

Tim Don (GBR) is another athlete who has game dialed in at the half-distance and backed up that notion once again in Puerto Rico. Don was close to the front of exiting the water and surged to the front of the race in the opening km’s of the bike. Smacking out a best bike ride by over four minutes as he carried a 5:50 lead on Cody Beals (CAN) and 7:06 on Trevor Wurtele. With a decent cushion between Don and his closest rivals, the 39-year-old handily cruised to the victory without having to go deep in the well of effort.

See also:  Swim Kit Essentials | Everything You'll Ever Need In Your Kitbag