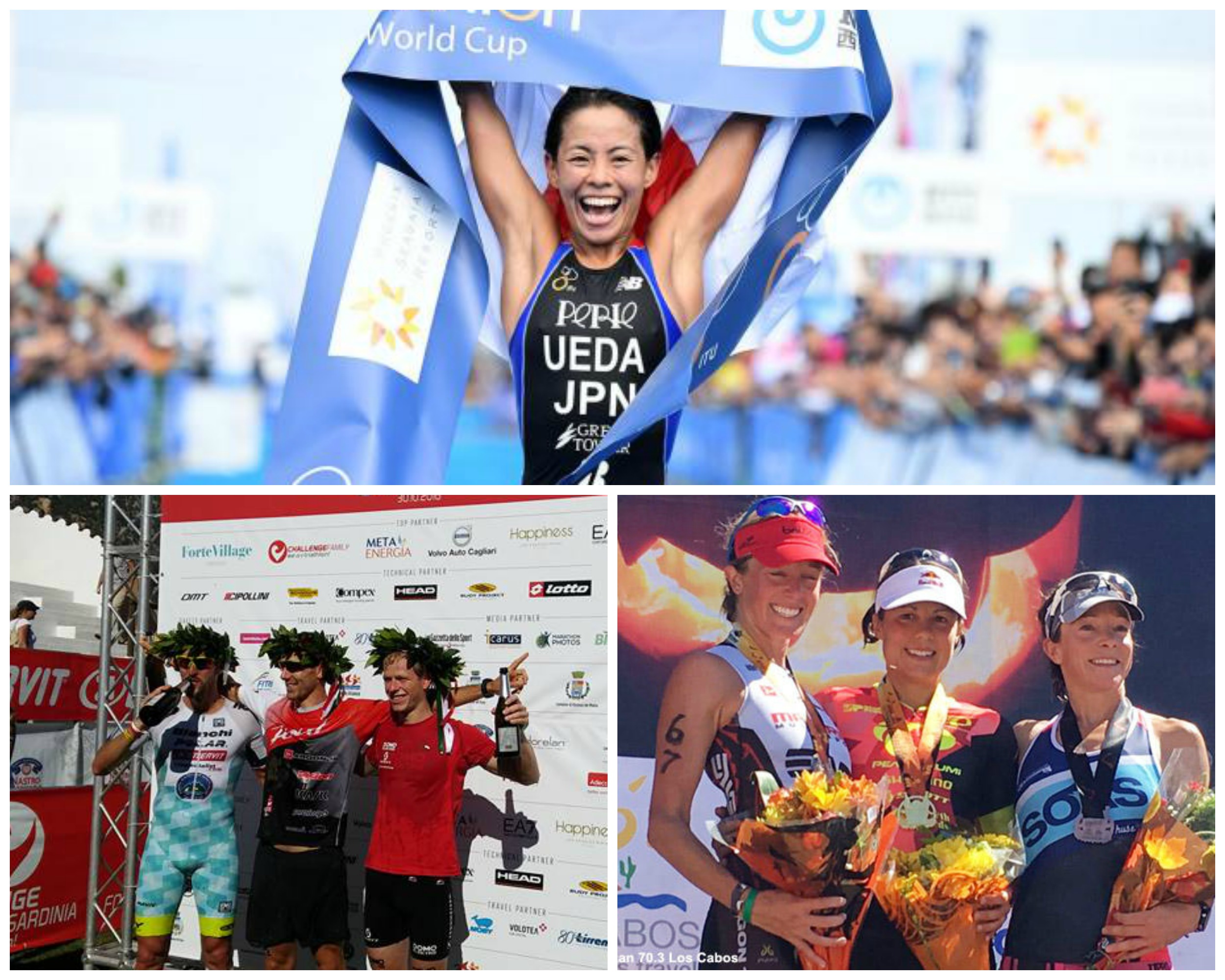 Fresh from his wins at XTerra Worlds and Ironman Cozumel 70.3, Mauricio Mendez (MEX) add a 3rd October win by winning the Ironman Los Cabos 70.3.   Angela Naeth of Canada capped her comeback after a season long fight with injuries with a win the women’s category.

Mendez kept paced in the swim and was jsut a second behind perennial swim leader Andy Potts (USA) who went out of the water at 25:27.   A chase pack that came out 8 seconds later included Matt Chrabot (USA), Drew Scott (USA), Martin Jensen (DEN) and Rodrigo Gonzales (MEX).

A 4-man pack consisted of Mendez, Scott, Potts and Chrabot dictated the lead, but Mendez was able to grab the lead by mile 21.   By the end of the bike leg, Mendez was closely followed by Scott and Chrabot by 2 seconds, and Jensen by 6 seconds.   Noted runners Alan Carillo (MEX), James Hadley (GBR) and Justin Metzler (USA) were 5 to 6 minutes off the lead.

Potts after toeing the leaders fell presumably with a mechanical failure, and started his run at 11th place.

After 5 miles, Mendez broke off with a 57 second lead over Chrabot and never looked back.  By 9 miles, the lead grew to almost 3 minutes.

Angela Naeth trailed the swim leaders by 2 minutes and 20 seconds on the swim.   Erin Jones (USA) led the swim in 27:47, with Charlotte Morel (FRA) and Kelsey Withrow (USA) behinds by 3 and 5 seconds.

Naeth immediately worked on her bike strength, and has icreased her lead to 46 to 53 seconds over Morel and Withrow.   A women’s best 2:20:32 bike split had Naeth leading going into T2 with a margin of 6:27.   Naeth was untouched on the run, and after a 1:26:10 run split, crossed the tape in 4:19:42 earning her win a fter a long bout with injuries.   Lesly Smith of the US came in 2nd and Sue Huse of Canada rounded out 3rd.

Ai Ueda has finished 2016 on a high winning at home in front of a parochial crowd that lifted her to the inaugural Miyazaki ITU World Cup title today.

Following a strong year of results, claiming bronze in front of a home crowd at WTS Yokohama, and silver last weekend at the Tongyeong ITU World Cup she again saved her best performance to last with a come from behind win. Summer Cook (USA) took the silver and compatriot Renee Tomlin (USA) bronze.

Ueda was not in the front swim group and had to work hard in the chase pack to close the gap to the leading group of 11, but it took until lap five on the 40-kilometre bike leg when they came together.

The day started with 23-degree temperature, 70 percent humidity and 14km/h winds, which made for a choppy swim. It was Cook who best handled the conditions and even grabbed a small wave to bodysurf in ahead of Yuko Takahashi (JPN), Jazz Hedgeland (AUS) and a stream of athletes after the 1.5-kilometre swim.

Together with Cook, Zsanett Bragmayer (HUN), Jessica Broderick (USA), Yuko Takahashi (JPN), Sara Vilic(AUT), Minami Kubono (JPN) a group of 11 were first out onto the bike and pushed out a 25 second lead on the first lap.

Despite the efforts of the front group they were not able to keep the chase group, headed up by Ueda away, and the two groups came together on lap five to form a pack of 25.

The third group that had fourth placegetter from Tongyeong Felicity Sheedy-Ryan were well off the pace some 2.30mins behind.  Ueda sprinted out of transition and got the early break, with Cook and Tomlin the first to respond closing the gap to just 50m. The pace and heat soon splintered the rest of the field with the next group of Yuko Takahashi, Vilic, Sena Takahashi, Hedgeland, Sato and Lynch 21 seconds behind.

On lap two Ueda again put the pressure on and stepped up the pace stretching out a small lead from Cook, desperately trying to stay in contact and not let the band snap, Tomlin had also fallen back but still in third.  But Ueda found a second speed and was not going to be denied a win at home, hurting but unrelenting she ran to the finish uncontested writing her name into the history books as the first winner of the Miyazki World Cup.

It has been a summer to remember for Cook, who just fell short of back to back wins but rounds out a year that has marked her arrival. She ends the season with two World Cup wins and a WTS title in Edmonton, silver at Miyazaki World Cup caps off a brilliant season for the American.  Tomlin has also been consistent this season and finishes her 2016 with another bronze to match the one from Tongyeong last weekend.

Behind the podium it was strong performances from three women all backing up from Tongyeong Vilic, Elana Danilova (RUS) and Hedgeland.

It was an event that provided a podium of firsts as Spaniard Uxio Abuin Ares captured back to back wins and the first gold medal at the inaugural 2016 Miyazaki ITU World Cup. While the other two podium spots were earned by Joao Silva (POR) and Gregory Billington (USA), backing up from a top ten finish in Tongyeong last weekend.

After surviving the masses during the swim and bike legs that saw 46 men enter the second transition together, Abuin executed on the run and timed his sprint on the blue carpet to perfection just edging out veteran Silva and Billington to end his 2016 with two World Cup titles.

Like the women, choppy waters for the two-laps of 750 metres welcomed the men. While the conditions were ready to test the field, it was William Huffington (USA) and Matthew Roberts (AUS) that best adapted holding a ten second lead exiting the water and long run into T1.

But the chasers were not far behind and after a short stint at the front of the bike Huffington and Roberts were joined by Maximiliam Schwetz (GER), Matthew Baker (AUS), Marcel Walkington (AUS), Jumpei Furuya (JPN), Ryousuke Maeda (JPN), Marco Van Der Stel (NED), Peter Denteneer (BEL) and Matthew Roberts (AUS).

Early race leader Huffington was forced out of the race in the early laps of the bike. These eight worked well to keep the chasers at bay for 20km and etched out a small lead, but the inevitable happened, and they all came together at the end of lap four to form a group of 46.

Kjel De Hertog (BEL) and Koki Yamamoto (JPN) were the first to take up the lead position in the group and a brave breakaway on lap five by Russell White (IRL) and Takanori Sugihara (JPN) was eventually brought back to the group.

As the pack remained together at the end of the bike the second transition zone would become a gathering of all contenders at the same time and a frantic changeover to get out first.  However, it was Simon De Cuyper (BEL), Peter Denteneer (BEL), Yuichi Hosoda (JPN) and Igor Polyanskiy (RUS) who were able to avoid any trouble and executed a swift and quick exit to lead out onto the run.

But the chasers were not going to let them escape up the road and a group of 12 came together. They remained that way for the first few laps, happy to test each other out, and looking comfortable with the pace.  On lap three the tempo had upped and the group was reduced to seven, Eder Mejia Munoz (MEX) established himself at the front from, Silva, Polyanskiy, Abuin Ares, De Cuyper, Polyanskiy and Billington.

Polyanskiy was the first to fall off on the bell lap and the pace stepped up again – six remained to fight out for just three medals.  In the final stages the sprint came from a long way out and it was Abuin who was first to go, but Silva and Billington were not handing it over.

Onto the blue carpet and in a final surge, Abuin broke the tape first and claimed his second victory in two weeks. The wily Silva was good enough to edge out Billington to grab silver. After finishing 37th at the Rio Olympics, Billington was pleased to end the year with a podium finish.