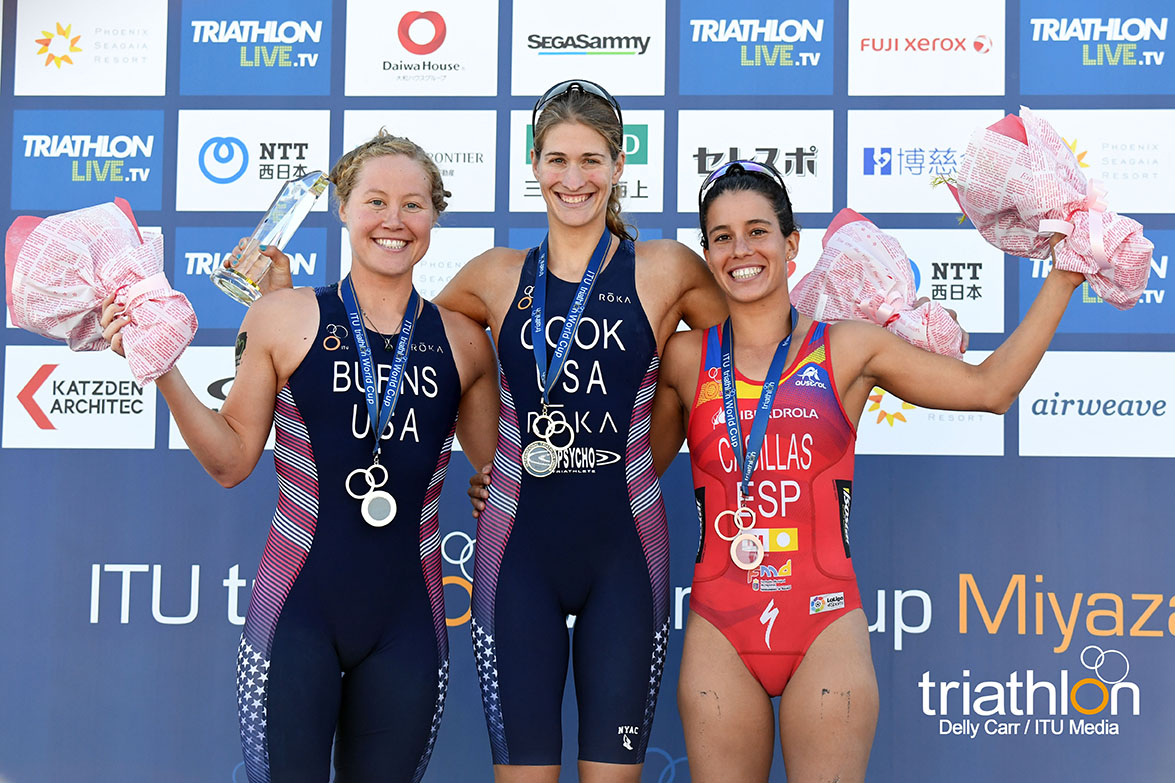 Glorious autumnal sunshine greeted the athletes for the 2018 ITU Miyazaki World Cup on Saturday, ideal conditions for the season finale as the athletes all eyed a strong end to their year. By mid-afternoon, it had clearly been a great day’s work for the American and Spanish teams. The women’s race saw a USA one-two as Summer Cook and Chelsea Burns powered their way to first and second respectively, Miriam Casillas (ESP) coming home in third. Spain’s Vicente Hernandez then delivered a superb run to win the men’s race ahead of USA’s Eli Hemming and Italy’s Delian Stateff.

Summer Cook’s final race of 2018 certainly didn’t get off to the greatest of beginnings as a false start resulted in her having to serve a 15-second penalty in T1 before getting out and onto her bike. A typically assured swim had already seen her and Brazil’s Vittoria Lopes first out of the choppy water, however, with a decent lead established over Japan’s Yuko Takahashi and the rest of the field.

Indeed, the penalty merely appeared to fuel Cook’s fire and she, Takahashi and Jaz Hedgeland (AUS) quickly chased down Lopes by the midway point of lap two.

Behind them, Chelsea Burns knew that she needed to drive the chase group if they were to have a hope of closing in on the leaders, and with Annamaria Mazzetti (ITA), Casillas and Julie Derron (SUI) for company, they were able to gradually chip away at the foursome’s advantage.

With three laps to go the two groups finally merged, Derron and Erika Ackerlund (USA) taking up position out front to try and force a move and open up some precious daylight for themselves going into the run.

It was the American out first on to the run with Takahashi and Charlotte McShane (AUS) on her shoulder, but the margins proved too fine as Cook came out of T2 armed with a steely determination to grab hold of her final run of 2018. Halfway through the first lap she laid down the gauntlet to the rest of the field and only Chelsea Burns was able to match those long strides.

With a 20-second lead over Derron, Hedgeland, Mazzetti and Casillas after 5km, the only question was which of the two training partners from USA would have the legs to take the tape, but with the final bend in sight it was Cook who went on to seal her second World Cup gold of the year, Burns her second podium.

Behind them it was Casillas who was able to dig in and hold off Hedgeland to take the bronze by a nose, Derron, Mazzetti and McShane some way back behind them.

The strong men’s field lined up in the midday sun ready to battle the waves lashing at the furthest buoy, and there was no surprise to see France’s Aurelian Raphael and Alessandro Fabian leading at the halfway mark, while New Zealand’s Trent Thorpe was a less obvious figure to be out front after 750m.

There the Kiwi stayed, too, coming out of the water and through T1 in the lead but with Gianluca Pozzatti and Japan’s Jumpei Furuya alongside. They then formed part of a 13-deep group of riders that had 15 seconds over the chase pack after lap one, but with the likes of Ryan Bailie (AUS) and Vicente Hernandez pushing them hard, it looked only a matter of time until they were caught.

There was no surprise to see a train of 23 riders formed just one lap later, but it continued to be Furuya looking to push things from the front, helping extend their lead over the likes of Menno Koolhaas (NED) and Jan Volar (CZE) in the chase group some 80 seconds back by the end of lap four.

At the bell, it was the Japanese duo of Furuya and Ren Sato along with Raphael successfully forming a mini-breakaway, which had a lead of 16 seconds by the time they emerged out of T2 and onto the 10km run.

That effort on the bikes soon proved to have taken too much out of the trio, however. A ruthless Hernandez seized the opportunity to put down the hammer, catching and then quickly dropping the leaders and pulling away from the entire field, an impressive 20-second gap created over Eli Hemming and Fabian by the halfway point.

Looking like a man who had put his injury problems well behind him, Hernandez continued to stretch that lead until he hit the chute for the last time, taking time to soak up the applause to revel in an imperious running performance and a golden end to what had been a difficult 2018 for the Spaniard.

Behind him, Hemming had put himself into an untouchable position to win silver, but Delian Stateff also had designs on the podium, chasing down teammate Fabian and making up a 23-second deficit over the last lap to grab a brilliant bronze. Marcel Walkington (AUS) finished fifth ahead of Christophe de Keyser (BEL).

“I felt good from the start, I swam well and I felt that my pace was good enough to keep at the front and i’m happy to finally get the win”, said a delighted Hernadez afterwards.