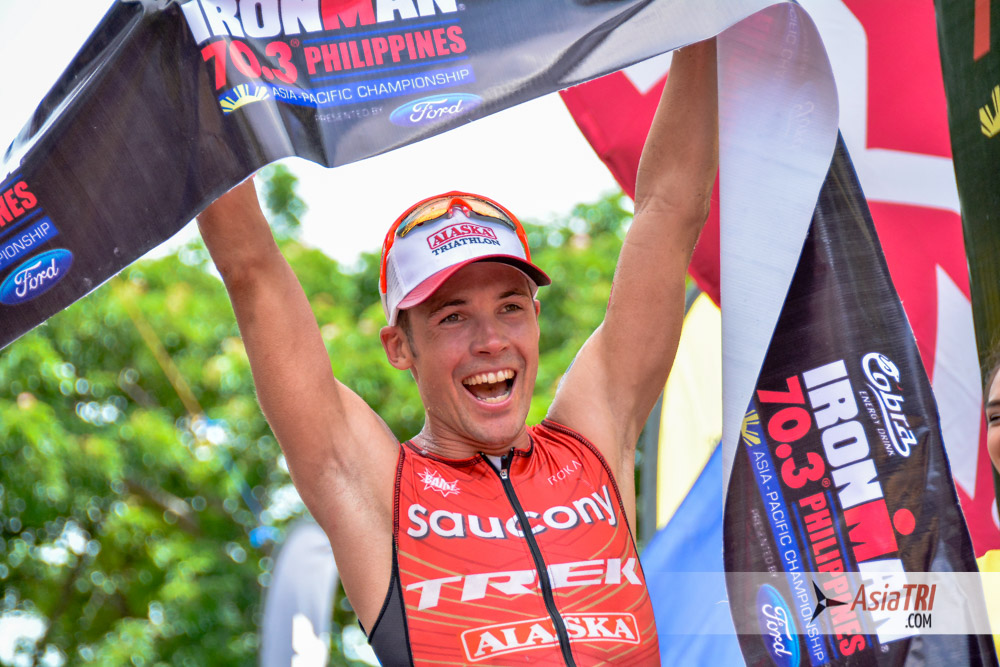 by Vinnie Santana and Marvin Manalang

Warm and windy conditions did not prevent defending champions Tim Reed and Caroline Steffen in taking their Ironman Philippines 70.3 titles once again, using their impressive bike and run splits to crown themselves as Ironman 70.3 Asia-Pacific champions.

Sam Betten (AUS) and Brent MacMahon of Canada, the 2014 champion, were the leaders going into T1 with a swim time of 23:58.   They were followed by a huge chase pack of seven, led by Brad Kahlefeldt and Craig Alexander.  Tim Reed was slightly dropped by the pack, and came into T1 23 seconds later. Reed quickly managed to join the lead pack, overcoming the deficit within the first 15 kilometers. The pack that rode all the way to T2 included Reed, Alexander, Anthony Costes of Spain, McMahon, and Betten. Coming out of T2 with the lead pack, Tim Reed immediately separated himself and had put a gap of 18 seconds over Alexander in the first mile.  Reed built that lead methodically, slowly padding the gap at every split: 1 minute and 11 seconds at the halfway mark, and two minutes and 11 seconds at the 16k mark.   He will not relinquish the lead over the 43 year-old 5-time world champion Alexander, who ran the 3rd-best split at 1:23:10. Caroline Steffen (CHE) rose up to the pre-race predictions and collected her fourth straight Ironman Philippines 70.3 title.   Mirroring the men’s race, Steffen had to scramble in the bike after Radka Vodickova (CZE) had opened a 59-second lead with a women’s best 25:51 swim time.  Steffen managed to cut that lead with a women’s best bike split of 2:19:04.  She overtook Vodickova in the first 20 kilometers of the bike leg.  Vodickova kept paced with a 2nd-best bike split of 2:20:07 and the women’s leaders both entered T2 only 3 seconds apart. Like Reed in the men’s race, Steffen used the first mile to put a gap over Vodickova.  A ten-second lead in the first mile became two minutes by the halfway point.  Despite some nutritional issues in the last kilometers, Steffen would sustain that lead and win by two minutes and ten seconds.  Sarah Crawley of Australia had the day’s best run among women with a split of 1:25:49, and bagged 3rd place to complete podium.

In the Filipino Elite category, August Benedicto and Monica Torres again defended their titles, finishing in 4:26:36 and 4:45:54 respectively. Benedicto again had to dig deep in the bike and run legs, after trailing by four minutes after the swim to Philippine national team mainstay John Leerams Chicano.   Paul Jumamil settled for second, while Chicano, who still led at the 16km mark of the run, finished third.   Monica Torres also trailed after the swim, but caught up with runner-up Maria Hodges on the 75k mark of the bike.   She used her 1:33:30 run split, the best in the category, to win by over 22 minutes over Hodges.