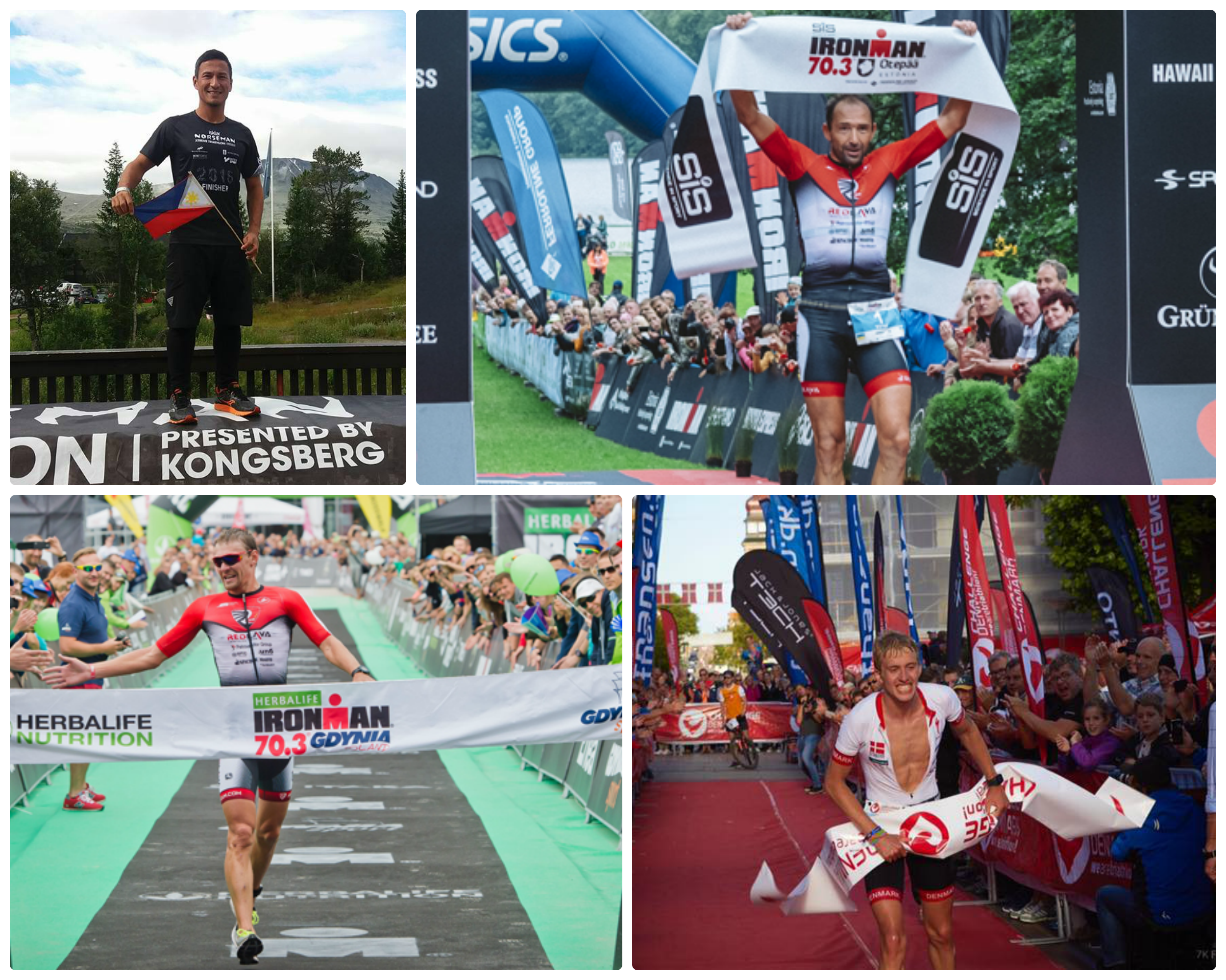 Thomas Strange and Camilla Pedersen took home wins for their country as they both win Challenge Fredericia.

Thomas Strange (DEN) was used consistency in all legs, combing a 2nd best swim, a 3rd best bike and a finishing 3rd best run to capture a home win in 3;49:23 over two Germans, Matthias Knossalla and Lukas Wojt.  Strange won with an 18 second victory margin over Knossalla.

Thomas Strange trailed  1 minute and 38 seconds to early swim leader Lukasz Wojt who broke away from a chase pack of four.  Wojt timed a fast 19:38 for the swim. A 3rd best 2:08:47 bike split combined with a fast tranistion 2 time, enabled Strange to build a 1 minute a 5 second lead over the Germans.

Camilla Pedersen meanwhile made it look easy on the women’s side, executing a near-flawless wire-to-wire victory, winning in 4:13:11.   She all had the best swim, bike, and run splits for the women.  She won over Yvonne Van Vlerken of the Netherlands by 4 minutes and 1 second.   Third was fellow countryman Maja Stage Nielsen, who came in ten minutes and 45 seconds after.

Ivan Tutkin (RUS) found his victory on the run while Diana Riesler (DEU) secured her win on the bike at the second edition of the Herbalife IRONMAN 70.3 Gdynia.

It’s a close one

For most of the race all eyes were on German Sean Donelly as the 29-year-old had the fastest swim in 24:18 minutes just seconds ahead Ivan Tutukin while Macie Grembski from Poland and the strong runner Daniil Sapunov (RUS) were not very far behind.

After a quick transition, Donnelly started to push hard on the bike right from the start. Through 20 kilometers, he was leading the race ahead of a group of seven by a minute. Donnelly hammered on the thrilling bike course, leading the field through the stunning Kashuba region next to the Baltic Sea. With 30 kilometers to go, he was still leading the race, but there was a shadow coming up. Milosz Sowinski from Poland, who took third place in 2015, was less than a minute behind when they got off the bike, Germany’s Florian Seifert was already more than three minutes down in third position.

Donnelly and Sowinski looked strong on the run, but two Russian athletes started gaining a lot of time on the pair. Tutukin managed to run the first 5 kilometers in 15:59 which was the key to a great win. Halfway into the run, he caught up with Donnelly and nailed the win with the best half marathon on the day. Thanks to a great run split, Sapunov passed Donnelly on the final kilometers, too.

Women’s top favorite Diana Riesler (DEU) was 2:06 down in fourth place when she exited the water. The German winner of 2015 IRONMAN Lanzarote and 2015 IRONMAN Malaysia was a bit behind, but she knew that she would have a great chance to catch up with the leaders thanks to her extraordinary bike strength.

Marie Santimaria (ITA) had the fastest swim in 26:57, almost two minutes ahead of Lauren Capone from the United States, but it didn’t take for long until Riesler took control. After only 20 kilometers, the 32-year-old had already put more than two minutes on Santimaria and more than three minutes on co-favorite Ewa Komander from Poland.

Four days after celebrating her birthday, Riesler could see another great party coming up when she came off the bike with a huge lead. She eventually highlighted a sensational bike split with a course record thanks to a fast run. Riesler topped last year’s winning time by more than four minutes, and she had plenty of time to celebrate her win in Gdynia. Komander reached the finish line a little less than 18 minutes after the champion. Santimaria had to give everything she had left in the final kilometers. She sprinted to the finish line only eight seconds ahead of fourth and 10 seconds ahead of fifth place.

Viktor Zyemtsev (UKR) celebrated a great victory at the inaugural SIS IRONMAN 70.3 Otepaa presented by Ferroline Group. The 43-year-old Ukrainian made his move to the front on the bike and sailed away from the rest of the professional field. While the women’s field was small, German Verena Walter won in an impressive fashion.

Drama on the run

The runner-up of 2016 IRONMAN Austria—Zyemtsev—was 54 seconds behind the lead and in third place after the swim. Russia’s Ivan Kalashnikov had the fastest split in 24:13, exiting the stunning swim venue at Lake Puhajarv 45 seconds ahead of Kim Harju from Finland. Olympic-distance specialist Kalashnikov led the race on the first half of the bike, but then Zyemtsev caught up with him and hammered away.

Although the Ukrainian veteran had a strong bike ride, all eyes were on a flying Norwegian athlete after the bike. Gudmund Snilstveit had the fastest bike split by far and got off the bike only 30 seconds down in runner-up position. Kalashnikov reached the transition zone 2:50 behind Zyemtsev, but he had the fastest start into the half marathon. Kalashnikov was pushing hard and he gained a lot of time on Snilstveit on the first five kilometers due to the fact that the strong biker from Norway seemed to suffer from his hard split. After less than seven kilometers, Kalashnikov moved into second place. Everyone expected Snilstveit to lose contact shortly after the pass had been made, but the Norwegian fought hard to keep the gap as small as possible. This tactic paid off just a short while later, and Snilstveit battled himself back into the mix. Thanks to a great performance on the final kilometers of the run he eventually took second place behind Zyemtsev. Snilstveit finished only 35 seconds after the strong champion and clearly ahead of Kalashnikov.

The women’s pro race was a bit downsized due to some withdrawals of strong pro athletes. Germany’s Verena Walter had a great day leading from start to finish. The 35-year old reached T1 just a minute ahead of Estonian local hero Alma Sarapuu, before the German leader embarked on a great solo ride on the bike. She got off the bike with a clear lead of almost 14 minutes and could already feel the first IRONMAN 70.3 victory of her career was within reach.

250 of the world’s bravest triathletes swarm the docks of Eidfjord, Norway at 03:00, fresh off a short night’s rest burdened with anticipation. The beginning of the Isklar Norseman Xtreme Triathlon draws near, a wild adventure across 226km of Norway’s most demanding landscapes.

This morning’s tension was washed away with a mass jump off the bow of a ferry in the heart of Eidfjorden. The 203 men and 47 women swam the first leg of Norseman, four kilometres, back to the beaches lead by Lars Erik Fricke for the change from swimming to cycling. The athletes took to the mountains posthaste, climbing out of the valley and into the clouds to cross Hardangervidda in some of the most intense and challenging weather ever seen on Norseman. Thick gusty fog, biting rain and 5˚C summer weather could deter the most hardened survivor, but the athletes fought through it — unfortunately, not without casualties.

Slick and soaked roads threatened the sanctity of the downhill segments, winding through the forests and plains, keeping the bravest on the brakes and at bay. The long-term leader, Lars Christian Vold, fell victim to the hazardous roads, proving everyone is fallible and allowing for the next man to break away. In the change from cycling to running, Lars Petter Stormo lead the men with Kristin Lie leading the women.

The final stretch… One 42km run toward the peak of Guastatoppen (elev. 1883m) to cross the finish line and claim the title of ‘Finisher’. Conquering the flat section, the athletes quickly made their way to Zombie Hill, a massively steep slope creeping up to the beginning of the rugged trail run toward the peak. 160 competitors were permitted to continue to the top in the hunt for the black shirt while the rest committed to the path for the white shirt — the full run without the vertical climb.

In a heated battle for first place among the men, Lars Petter Stormo (10:22:37) claimed victory ahead of Henrik Oftedal (2nd) and Lars Christian Vold (3rd). Equally as intense of a matchup, Kari Flottorp Lingsom (12:04:52) squeaked out a win in front of Kristin Lie (2nd) and Viviana Hiis (3rd).

With half of the top-ten finishers travelling from abroad to take on the challenge, Norseman is a big and bold as ever. Notoriously moody Norwegian weather pushed the racers to their limits and beyond, proving once again that the Isklar Norseman Xtreme Triathlon is a force to be reckoned with!

Notable among the Finishers was the first ever Filipino to finish the Norseman Xtreme Triathlon, Omar Paredes.   Paredes, who earned the famed Black Shirt,  is an age-grouper/coach based in Laguna, south of Manila, Philippines.  He finished in 16:09:12. Watch out for our interview with Paredes here in AsiaTRI.com!