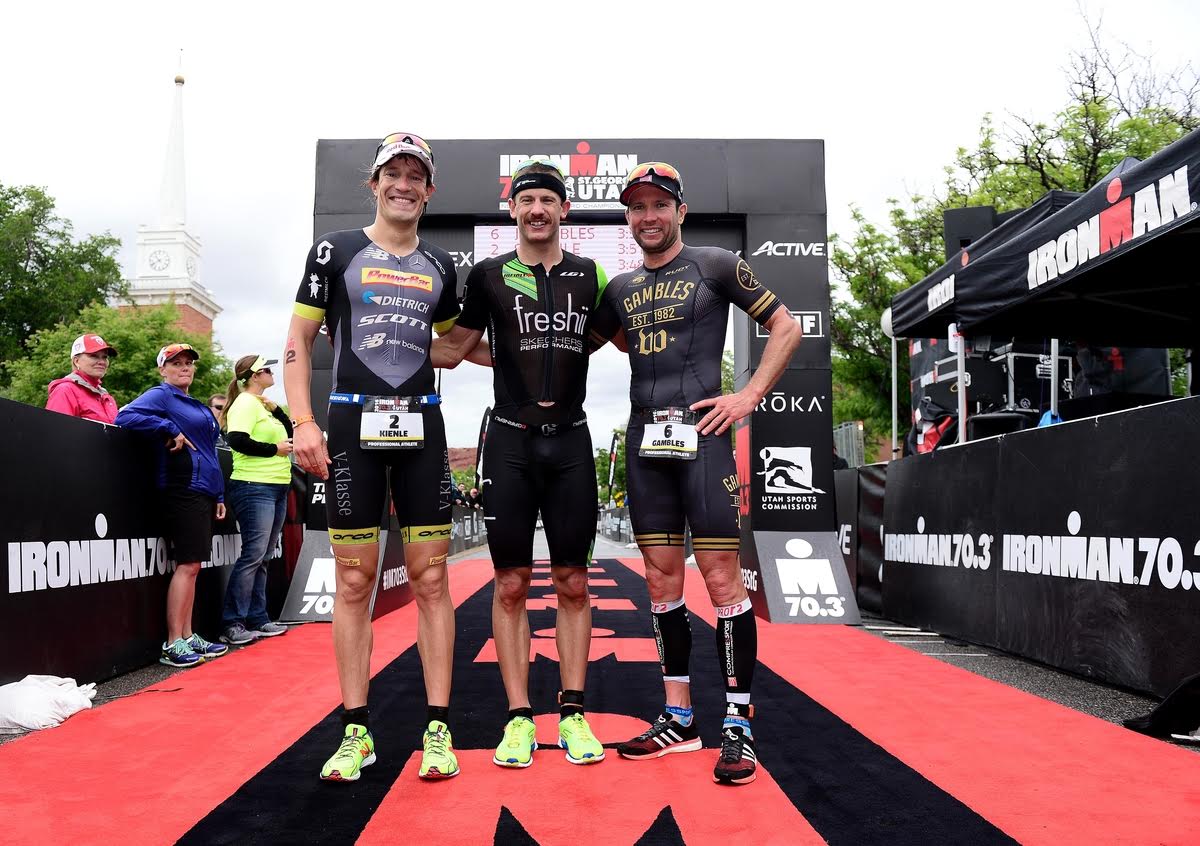 Out of the waters of Sand Hollow Reservoir, Cam Dye (USA), Tim O’Donnell (USA), and Michael Raelert (DEU) led a pack of seven men within seconds of each other. Ben Hoffman (USA), Trevor Wurtele (CAN) and Sebastian Kienle (DEU) followed closely at 2:30 behind, while Lionel Sanders (CAN) trailed 4:30 down, respectively.

Once on the bike Dye, O’Donnell, Raelert, Matt Chrabot (USA) and Sylvain Sudrie (FRA) pushed the pace, while the rest of the field remained tight behind. Strong cyclists Sanders and Kienle turned up the heat on the second half of the bike with Sanders earning the fastest bike split by over 2:30, placing him in the lead, with Kienle closely following. Raelert, Collington, Dye and O’Donnell were next off the bike all looking at close to three-minute deficits to overcome a pair of talented runners.

For the first eight miles of the run, Kienle, while nearly a minute behind, continued to match Sanders pace. Farther back, Joe Gambles (AUS) and Collington battled for who would take the final podium position. In addition to the fastest bike split of the day, Sanders recorded the fastest run split of 1:13:30, claiming the 2016 IRONMAN 70.3 North American Pro Championship, with a winning margin of 2:52 over Kienle. Gambles was eventually able to overtake Collington as he captured a third place podium finish with a time of 3:53:26.

Once on the bike course, Lawrence and Kessler exchanged the lead as Wurtele continued to stay within striking distance. Wurtele would eventually surge to the front of the race and dismount her bike with a three-second advantage over Lawrence and close to a minute lead on Kessler.

Wurtele held the lead on the run while Lawrence maintained a consistent pace less than a minute behind. Wurtele stretched her lead out in the closing mile, capturing the 2016 IRONMAN 70.3 North American Pro Championship with a time of 4:16:48. Lawrence was next across the line just 1:17 behind to take second with a 4:18:04 finish. Kessler continued to hold her strong pace and protect a third place podium finish with a time of 4:22:02.

Winners of the Challenge Camsur lucky draw announced
May 14, 2015