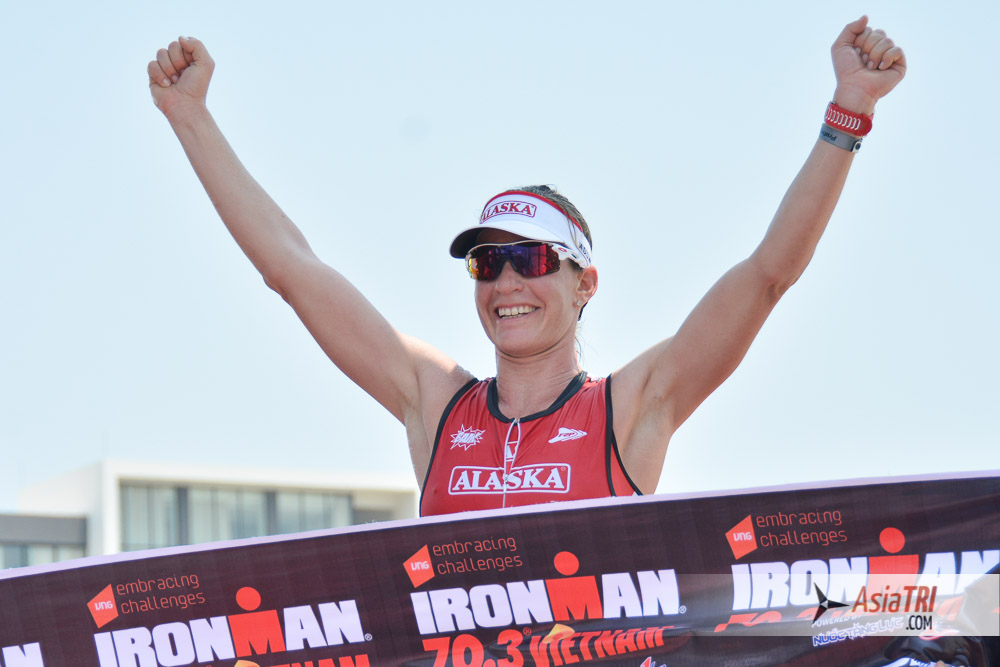 The second edition of Ironman 70.3 Vietnam had over 1.100 athletes from 60 different countries racing in Danang this Sunday May 8th in format of 1.9k swim, 90k bike and 21k run. France’s Cyril Viennot, who placed 4th last year, was the first athlete across the line on a tight battle with Luke McKenzie and Tim Van Berkel. While Switzerland Caroline Steffen defended her title from last year’s race, she had Radka Vodickova and Liz Blatchford on her heels for most of the day.

Sam Betten was the first out of the water in 21:58, he led a large pack of athletes that included Luke McKenzie, Tim Reed, Tim Van Berkel, Matt Franklin, Eric Watson and Ivan Kalashnikov. The group had a two minute lead on Cyril Viennot.

On the bike Luke McKenzie quickly went to the front and that split the main pack apart in several smaller groups, behind Luke, it was Tim Reed, Matt Franklin and Tim Van Berkel riding together. Luke seemed to be dominating the race when he started to struggle with lower back in the final 10km of the bike course, Cyril took advantage of that and with the best bike split of the day in 02:03:27 Cyril they arrived at transition two together with a four minute to Reed, Berkel and Franklin.

Cyril quickly moved to the front but Luke kept him within striking distance for the first 10km, the first u-turn mark, of the race. The biggest mover was Berkel, who at the 13km mark overtook McKenzie and by the 15km mark was only 2min back from the Viennot. In the end Viennot secured the win in 03:54:09, Berkel was 2nd in 03:55:08 and McKenzie rounded up the podium in 03:59:18. Radka Vodikova led the swim in 00:23:25 with Liz Blatchford and Caroline Steffen right on her feet, the trio had a a minute lead on Japan’s Keiko Tanaka and another two minutes on Dimity-Lee Duke.

Despite opening a small gap early in the race, Radka was joined by Steffen and Baltchford and that would be the scenario for the rest of the day. The trio had each other in sight until the end of the bike and a gap of 3’30” to Dimity-Lee Duke.

Video: 9 Bike Maintenance Mistakes All Cyclists Have Made
January 25, 2017
Posting....