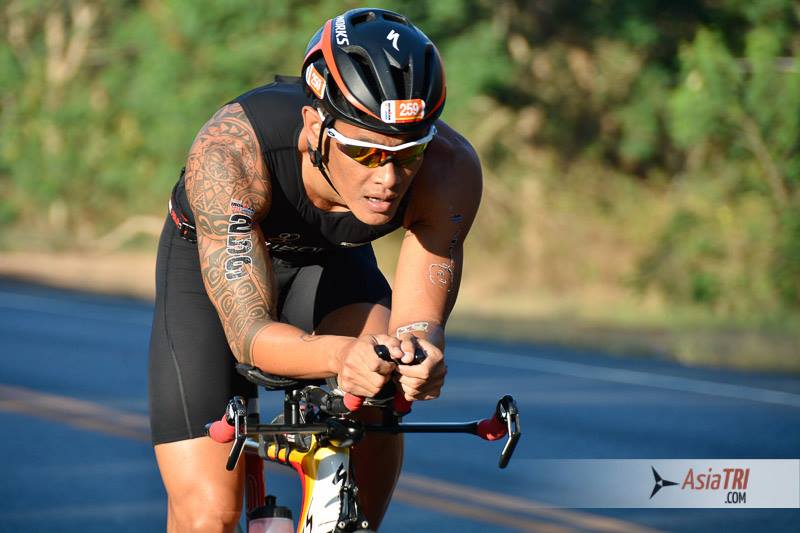 After years of near misses, Andy Wibowo finally stood on the top step of the podium at the 2015 Bintan Triathlon with a dominating wire-to-wire performance which saw the popular triathlete become the first Indonesian winner of the marquee Olympic distance event. Jacky Foley of the USA took the women’s title outlasting Kathryn Haesner in a thrilling contest, while earlier in the day, triathlon legend Chris “Macca” McCormack put on an exhibition-like show to win the Sprint Race.

As the men gathered on the beach at the ever beautiful Nirwana Gardens for the 1:45pm start of the main event, the rain that had been falling all day had lessened to a drizzle but at least the grey skies had taken some of the sting from the oppressive tropical heat of Bintan.

Wibowo led the charge down the slope that shattered the calm, clear sea and soon took his usual spot at the head of the swim pack. The popular Indonesian didn’t take long to break clear and when he rounded the final buoy and headed for shore, the big crowd on the beach could see he had a huge lead. His swim split of 21:06 put him 70 seconds clear of the next competitors, Rick Atkinson of Australia and Colin O’Shea of Ireland, but the big question was whether Wibowo could turn that advantage into a victory; he’d been first out of the water at Bintan many times before but had always been overhauled on the bike or run.

The 40km bike course was slightly different for the 2015 event with an early loop into the new Lagoi Bay development replacing the traditional ride around the Paser Oleh Oleh village later in the route. The punishing hills of the Ria Bintan Resort were still on the menu though, and with the wet roads it was a challenging cycling circuit. Wibowo was more than up for that challenge and he actually increased his lead after covering the 40km in 1:03:50, which was faster than all his main challengers except for one of the pre-race favourites Arnaud Selukov, who had put in a relatively lackluster swim by his standards.

Selukov led the chasers out of T2 followed by Atkinson and O’Shea and going on previous form at least one of them had a good chance of reeling Wibowo in. The Indonesia never wilted on the run and finished impressively with the third-fastest split of 39:23 over an undulating and in places muddy run-course. His victory was assured as he entered the finishing chute, allowing him to take in the special acclaim afforded to a local hero. His winning time was 2:05:18, giving him an almost two-minute margin over O’Shea, who moved into the runners-up position thanks to a storming run.  Selukov finished third.

Having been caught three times previously after holding big leads after the swim, the Bali-based Wibowo was obviously ecstatic about winning the race.

See also:  The Essential Triathlon Checklist | What To Pack In Your Bag For Race Day

“I’m really happy, I’ve been training really hard and everything has paid off. I really tried to push myself on the bike and it worked this time,” he said.

“I love racing at Nirwana, it’s a well organised event and of course I’ll be back to defend my title,” Wibowo added as he left the medical tent after having a foot injury tended to.

“I cut my toe with my wheel during transition as I racked my bike,” the champ revealed. “I didn’t feel too much pain at the time, but now it hurts a bit more!”

The women’s wave started 15 minutes after the men and Foley was even more dominant in the water than Wibowo had been, hitting the beach almost two minutes clear of the Kiwi Kathryn Haesner. Indeed, her split of 21:37 was faster than all the men except the champ. Foley has used her strong swim weapon to clean up at recent multisport events in Singapore, but she was made to work harder for her win at Bintan as Haesner came charging back on the bike.

The Kiwi made the catch at the 35km mark and as the pair entered T2 together, the scene was set perfectly for a battle between the two accomplished runners. Foley actually moved back into the lead with a quicker transition and while Haesner kept Foley in sight throughout the first lap of the 5km circuit, she couldn’t close the gap. Still, with only some 15 seconds separating the duo, as they headed out for the final 5km all was still to play for.

But Foley thrived on the pressure of leading and as she entered the final kilometer along the beach and past the resort pool, the American had increased the margin to 30 seconds and ran on strongly to claim the queen’s crown in a time of 2:15:41. Haesner duly took the runner’s-up spot with Vanessa Colless of Australia well back, but also well clear in third.

Having dominated the MetaSprint Series, Foley knew she wouldn’t have it as easy for her first trip to Bintan.

“No, there was tougher competition at this one. I had a good lead out of the water and then Kathryn caught me in the last 5km of the bike. I was pretty excited as I didn’t know if I could hold her off that long, but I did and that helped boost my confidence,” Foley revealed. “I knew I could do a comparable run with her so it was just a matter of who mentally could get through the run.”

“I’m really excited. You know, that was a four-minute PR, so no matter the place I have to be stoked about getting a personal record, especially as the bike course was much harder than on my previous best,” she added. “It’s a beautiful area but I was so ready for the heat and then we got the rain but I had all day to mentally adjust.”

Adjust she did, and proved a very worthy champion.

Having done the Sprint-Olympic double on his first visit to the Bintan Triathlon in 2014, McCormack returned for just the shorter race this year. He dominated the proceedings, being the only pro in the Sprint race, taking the win with a solo wire-to-wire performance in a time of 1:03:04. While the record books will show the two-time IRONMAN champion as the 2015 winner, the Age-Group race for the mere mortals produced another popular winner with local Bintan athlete Oscar Feryanto taking the crown. His time of 1:04:21 was some four minutes clear of Margus Oprus in second, while Richard Platt took the final step on the podium.

In the women’s Sprint race, the 2006 champion Rachael Guadry of Australia returned to the Bintan Triathlon after many years away from the sport and produced an impressive comeback to claim her second title. She’s also a former Olympic distance winner, having won that race in 2007. Fellow Aussie Kathryn Campbell was the runner-up this year, with England’s Nicole Rondy in third.

The Bintan Triathlon festival features two days of action, with the younger generation getting the spotlight on the Sunday morning. The Youths aged 12-15 were first off the mark, racing over a 300m-12km-3km course on a much sunnier and hotter day than the adults had enjoyed the day before. Nicolas de Berail emerged as the male champ, taking the title from the recent MetaSprint Series champ Aaron Kiss, with Shun Tze Edward Lee just holding off Valentin Van Wersch, who incidentally was from the younger 12-13 sub age group, to be the third-fastest male youth.

The fastest female youth was Emma Middleditch, also from the 12-13 age group, who used a storming run to overhaul her older sister Louisa to take the overall crown. Third over the line among the female youths was Kenza Brouwer.

The youngest triathletes of the weekend were those aged 8-11, competing over a 150m-6km-1.5km course for the Kids titles. Lucas May emerged as the overall champion among the boys from Austin Cocks in second and Daniel Lucke in third. The girls’ crown went to Caitlin Van Selm who held off runner-up Natasha Wilson, with Harriet Strand, also notably from the younger 8-9 sub age group, the third fastest.

1,000 athletes competed across many age group categories at the 2015 Bintan Triathlon festival; for full results go to www.bintantriathlon.com.

The next big race on the calendar from Bintan Triathlon organiser MetaSport is the Singapore International Triathlon on July 25 (www.singaporetriathlon.sg) followed by the IRONMAN 70.3 Bintan on August 23, which replaces another MetaSport event, the Metaman. For full details of that race, visit (www.ironmanbintan.com).

Olympic and World Champions Battle it Out in Grand Finale of Super League Triathlon in Feb 2019, Singapore
December 23, 2018