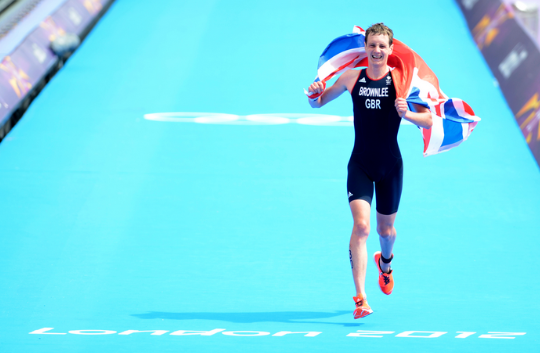 At 24, Alistair Brownlee was the first triathlete to win the test event of the Olympics and the triathlon Olympic gold itself in London 2012. His achievement was made even more incredible by being the first to win at home since the triathlon debuted at the 2000 Sydney olympics. After dealing with four years of  ups and downs, mostly due to injuries, he arrives in Rio at his best to defend the Olympic title.

Before Alistair, we could list a few athletes who swam strong, pedaled strong and ran  even stronger. For him and his brother Jonathan (bronze medal in London 2012), this has to be the recipe for winning. Many ITU athletes have realized, you have to be a complete triathlete to have any chance against the Brownlee brothers.

The second world title came in 2011, a year before his greatest achievement, the Olympic gold. After the gold medal, both Brownlee brothers have gone through difficult times, with few titles. A series of injuries eventually prevented Alistair to win another individual world championship.  His last major title was the gold in the Commonwealth Games 2014.

Even by leaps and bounds, Alistair follows with impressive statistics. His win rate is impressive 50%, and 66% of the time he was on the podium. For the World Triathlon Series, their numbers are even better: 65% winner and 78%, he was on podium: He is also known to change racing standards in Triathlon, and running seems to be his strongest link.   He recorded a 28:32 in a 10km track meet at Stanford University.  In London 2012, even reducing the pace and celebrating in the end, he recorded 29:07 in the final 10km run to beat Spain’s Javier Gomez.

Javier Gomez, the world champion and the biggest threat to Alistair’s double gold attempt,  had an unfortunate accident that would prevent him from competing in the Rio Olympics.

With or without Gomez though, Alistair would still be among the favorites, mainly to the fact that he always performs at his best when it matters. The interesting thing is that if he wins again, few will recall the difficult injury-riddled four years. Right now, only he has the opportunity to defend and win consecutive golds in triathlon.  And he definitely knows it.