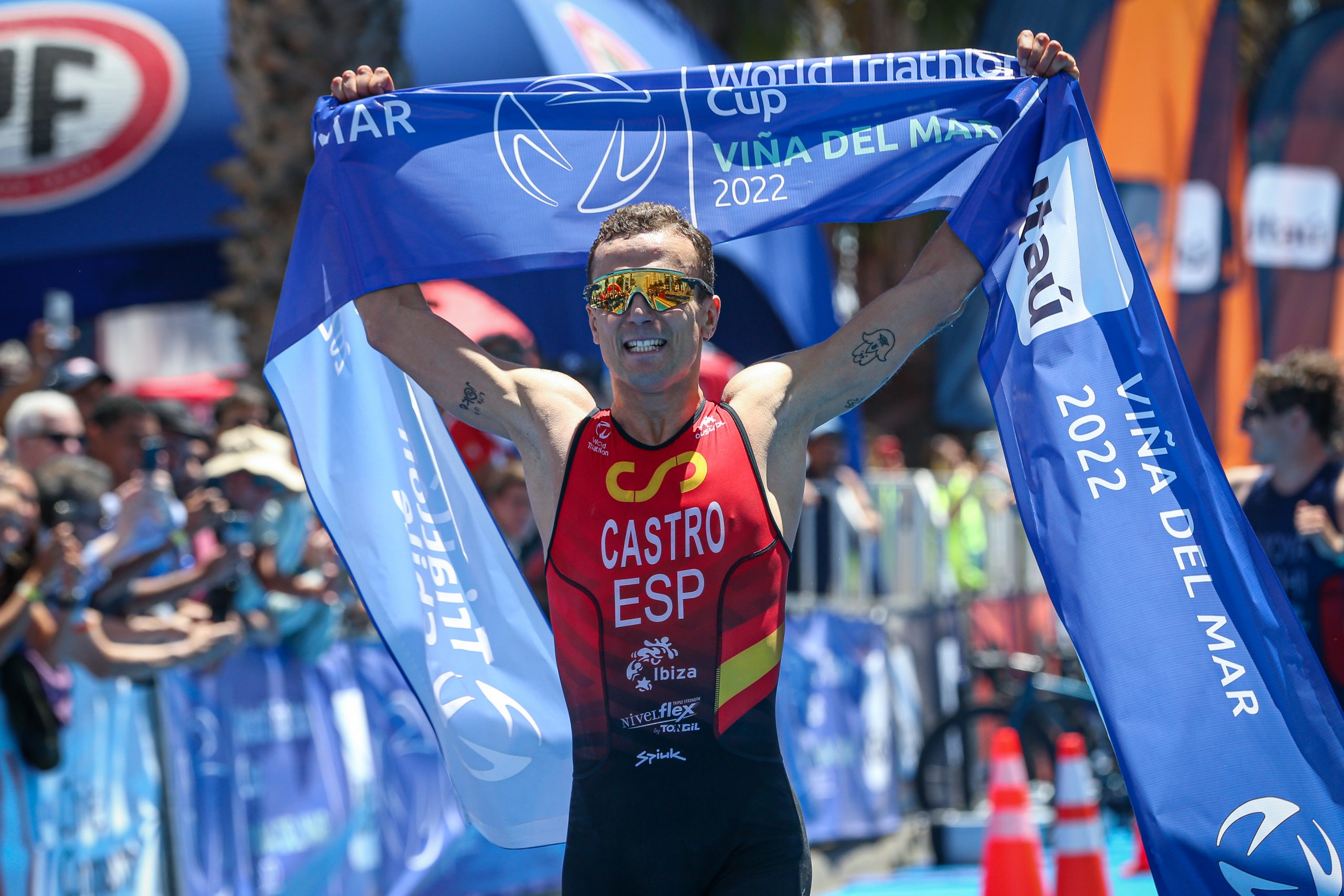 With just a few hundred metres to go and Chile’s Diego Moya leading the country’s first ever World Cup, it was to be Spain’s David Castro Fajardo who pounced down the final straight to win a dramatic sprint finish at Sunday’s World Triathlon Cup Vina del Mar.

The Santiago 2023 Pan American Games course was getting its first workout before next November’s championship, and Castro had put together a good swim in choppy conditions to exit 15 seconds behind Moya and alongside Morocco’s Jawad Abdelmoula, the trio remaining locked in battle for the rest of the race.

Out onto the run, Castro and Moya moved quickly to the front, the crowds urging on their idol but the Spaniard stuck firmly on his shoulder, Abdelmoula unable to reel them in. Down the final straight, it was Castro making the decisive move and as he took the tape and debut gold, the crowd was lifting Moya to edge silver ahead of the Moroccan star in third.

“The swim was hard, the water very cold, but the group worked well on the bike to catch up and I wanted to start picturing the run on the last lap” said a happy David Castro. “Diego set a good pace and my legs were tired but I had enough to give at the end. I saw him check the watch and the crowd was calling his name, but that was good for my focus too, and finally I could get my first World Cup victory.”

Just as in the women’s race two hours earlier, the currents and waves caused a few headaches as the field spread before finally spearing towards the buoy, but it was Moya slicing through the clear water, Nicholas Quenet (RSA) and Alessio Crociani (ITA) on his feet.

Moya had carved out a healthy advantage but struggled out of the waves before the long run up to his bike. Undeterred, it was a near-perfect transition that saw him out all alone and taking the race to the rest of the field, but by the end of lap one of three he was joined by five more athletes and on the long straight that began lap two another pocket of chasers bridged up.

That meant 18 athletes were riding together, another Chilean Vicente Trewhela taking a solid pull out front, Matthew Wright (BAR) Stefan Zachaus (LUX) and Jannik Schaufler (GER) also pushing the pace just over 30 seconds ahead of the Sanchez-led chasers.

That gap stayed the same as the leaders hit transition for the second time, Germany’s Chris Ziehmer out onto the run first, Crociani and Abdelmoula for company, Darr Smith right with them for USA.

Castro and teammate Esteban Basanta Fouz were quickly amongst them, Moya and Crociani likewise, and the Chilean was soon moving his way to the front with the adrenaline pumping.

It was a rapid pace Moya was laying down to try and drop some of his main competitors, Smith and Aram Michell Peñaflor Moysen (MEX) the first to go but even Abdelmoula struggling to hang tight.

The final 2.5km was cat-and-mouse between Moya and Castro for the gold as the crowd ramped up their support, Abdelmoula and Schauffler for the bronze.

The Moroccan pulled into third before the last turn, which was also Castro’s moment to charge, searing away to the tape while Moya emptied himself to hold off his ASICS World Triathlon teammate Abdelmoula, the pair making history as the first duo from the development squad to stand together on a World Cup podium.

Schauffler held on for fourth ahead of Jordi Garcia Gracia (ESP) and Crociani, with Alois Knabl (AUT), Smith, Penaflor and Basanta closing out the top ten.

“I’ve been working so hard for this race, I’m really happy with the work i’ve done with my coach Anita (Maria Lecumberri),” said Diego Moya. “I’m so happy. I was feeling really good in the swim but it was all about the run. There was a lot of pressure, I tried a few times to get away but David finished strong. The crowd here was amazing.”

“I’m very happy to finish third, my first race as the number one and my first time in Chile, so I just want to take away the experience and a good result from a very strong start list,” said Jawad Abdelmoula. “Diego pushed very well and I didn’t know where my form was so I preferred to be patient. Two months ago I was injured so this makes me very happy.”