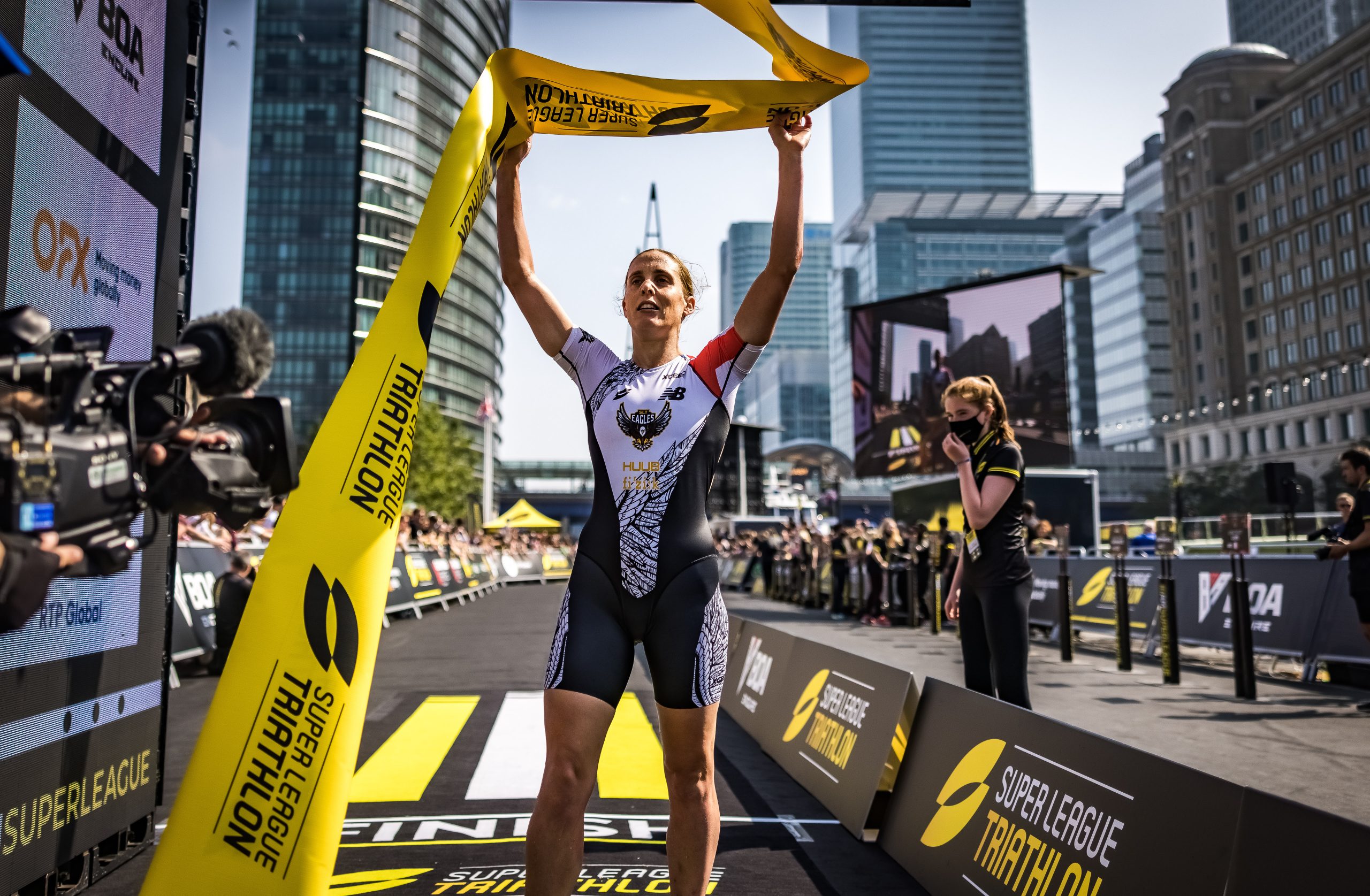 The Triple Mix, new team dynamics, glorious sunshine and superlative performances were all on display in London today as Super League Triathlon hit the UK for the first time. In Super League’s first outdoor event for two years, Jess Learmonth headed an all-British women’s podium in their return after Tokyo glory, while New Zealand’s Hayden Wilde was the other outright star of the show.

The Triple Mix – consisting of a 300m swim/4km bike/1.6km run, before Stage 2’s run/bike/swim, and Stage 3’s bike/swim/run – came down to a Stage 3 showdown between the British stars. The finale would witness Learmonth utilise her renowned swim prowess to create an unsurmountable advantage heading into the final run of the day, holding off the chasing Taylor-Brown (who crashed on Stage 2’s bike leg) and Holland to secure her second Super League title after the SLT Arena Games Rotterdam in 2020 and a giant $20,000 winner’s cheque.

“At the end of Stage 2, I started to regret coming! It was so hard and boiling hot that it was horrendous, especially on the run course and its cobbles,” said the 33-year-old Yorkshire star at the finish. “I was hoping for the best on some of the bike leg’s tight corners, and I think I took too many risks. But I loosened up on the final swim and gave my legs a rest, and I’m now looking forward to the next few weekends of Super League racing.”

Today’s event would also see the birth of Super League’s new team format, with multinational squads of Sharks, Rhinos, Cheetahs, Scorpions, and Eagles adding an extra level of excitement to the already enthralling concept in both the women’s and men’s events.

The men’s race followed hot-on-the-heels of the women’s event, again under sun-drenched skies and with the heat rising further.

After relentless racing in Stages 1&2, the men’s Triple Mix came down to a Stage 3 showdown between Hayden Wilde of New Zealand and two of triathlon’s biggest names in France’s Vincent Luis and Jonny Brownlee of Great Britain. And yet the 22-year-old Kiwi would produce a statement victory, utilising Super League’s unique Short Chute element to create a winning advantage on the final run of the day.

Much like the women’s event just before it, the field was crammed with the world’s fastest male triathletes. This included Tokyo Olympic medallists Alex Yee and Jonny Brownlee, as well as short-course mainstay Vincent Luis of France and a host of rising triathlon stars.

Wilde had been trailing his rivals until the final lap of the day’s final run, before he utilised his Short Chute to perfection to storm into the lead. The New Zealander created clear daylight and it was enough for the Shark to secure gold ahead of his famous rivals Luis and then Brownlee.

“I knew I had to get as close to Vincent and Jonny as I could before playing the Short Shoot card, before giving it a big surge for the final 500m,” said the Kiwi post-race. “I knew Jonny was going to be the man to beat as half of Leeds seemed to be here as well, so it’s awesome to beat him as he’s a legend.”

So does Wilde’s win over Luis and Brownlee herald a changing of the guard in men’s short-course triathlon? We’ll know more when Super League returns next weekend in Munich.