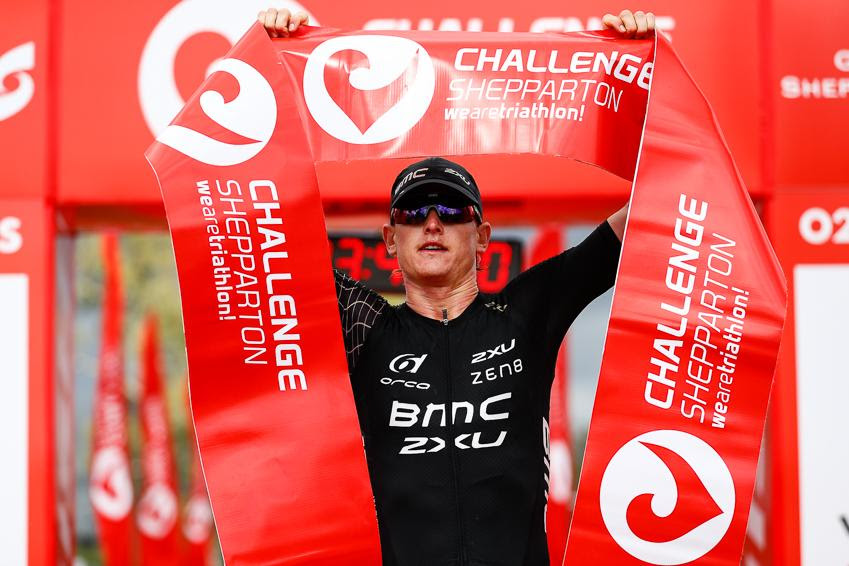 After a particularly strong race – and especially an impressive run – Max Neumann just won CHALLENGESHEPPARTON. In the women’s race, it was top favorite Ellie Salthouse who led the race from start to finish, eventually winning and thus winning her fourth race in a row.

Despite a clear blue sky, the temperature at the start of CHALLENGESHEPPARTON was a bit disappointing. With only six degrees, the pros did everything they could to stay warm before the early start, but fortunately they knew the temperature would become much more pleasant during the day. Besides the water temperature of Victoria Park Lake was fine with about 19 degrees and that seemed to suit especially Trent Thorpe and Josh Amberger. Both athletes took the lead immediately and saw their lead grow to just over a minute in the water. After 23:14 minutes they headed for T1 with a nice gap on the rest of the field.

On the bike, it was immediately Amberger who rode away from Thorpe, sending a clear message: ‘I’m going for the win’. And that’s exactly what he was going for, because he kept on pedalling as hard as possible, increasing his lead to about one minute. Behind Thorpe, who also continued to ride solo for what he was worth and hovered around a minute behind Amberger, a chasing group consisting of five athletes was formed.

One of the athletes in that group was Max Neumann, who made a move as the kilometers flew by and passed Thorpe. As a result, Neumann came second and at some point his split times were even faster than those of race leader Amberger. Still, it was Amberger who was the fastest biker of the day thanks to a bike time of 2:04:14hr, and therefore also got to start the half marathon first. The differences were small, however, as Neumann followed at a minute or so and behind him was the larger chasing group.

In the first few kilometers, it was Neumann and also Steve McKenna, who worked his way up to a third position, who began to make up time on Amberger. It wasn’t long before Neumann saw his high pace rewarded with an overtaking move on Amberger and becoming the new leader in the race.

Neumann’s fast pace eventually proved inimitable and kilometers were all completed at an average speed of 3:20 minutes per kilometer, resulting in a 1:10hr half marathon. After 3:42:37hr Neumann claimed victory. Behind Neumann it was still pretty exciting between Josh Amberger and Steve McKenna. The latter ran about four minutes faster, but ultimately came up just short of finishing second. Therefore it was Amberger claiming the second spot in the end, after 3:46:14hr. McKenna became third after 3:47:06hr.

Women’s race: Ellie Salthouse on fire
In the women’s race, a similar start to the men’s: two women, Ellie Salthouse and Grace Thek, took off immediately during the swim and built a lead of over a minute. With that lead they began – after being in the water for 27:11 minutes – their bike, followed by the rest of the women who naturally wanted to do everything in their power to close the gap as quickly as possible.

While Salthouse and Thek teamed up in the water, on the bike Salthouse decided to up the ante and so she quickly rode away from her pursuer. Salthouse’s lead grew quickly, although that also had to do with Thek struggling a little bit on the bike and saw, among others, Slater and Renee Kiley pass her. At the halfway point of the bike, Salthouse was in the lead and had a 1:15 minute advantage over Slater, 2 minutes over Kiley and 3:55 minutes over Thek.

See also:  Ironman Malaysia ends on High note, Will be back on November 17, 2018

In the end, it was Slater who set the fastest bike time (2:18:13hr), a really impressive effort. However, that could not change the fact that Salthouse was still the first female athlete heading into T2, although the difference between both ladies was minimal. In third place, Kiley returned to the transition area.

During the run, Salthouse was in complete control of the race and her victory was never in danger. Behind her, a lot of things happened, but it was mainly Thek who stood out. After a mediocre bike part, she came back strong during the run and even passed Kiley in the final phase and therefore got back on the podium again. However, Salthouse and Slater were not caught up and ended up finishing first and second. Salthouse did so after 4:09:13hr, Slater after 4:14:02hr. Behind Salthouse and Slater it was Thek crossing the finish line third after 4:15:32hr.

Tri-Factor is back with First Race in Vung Tau, Vietnam