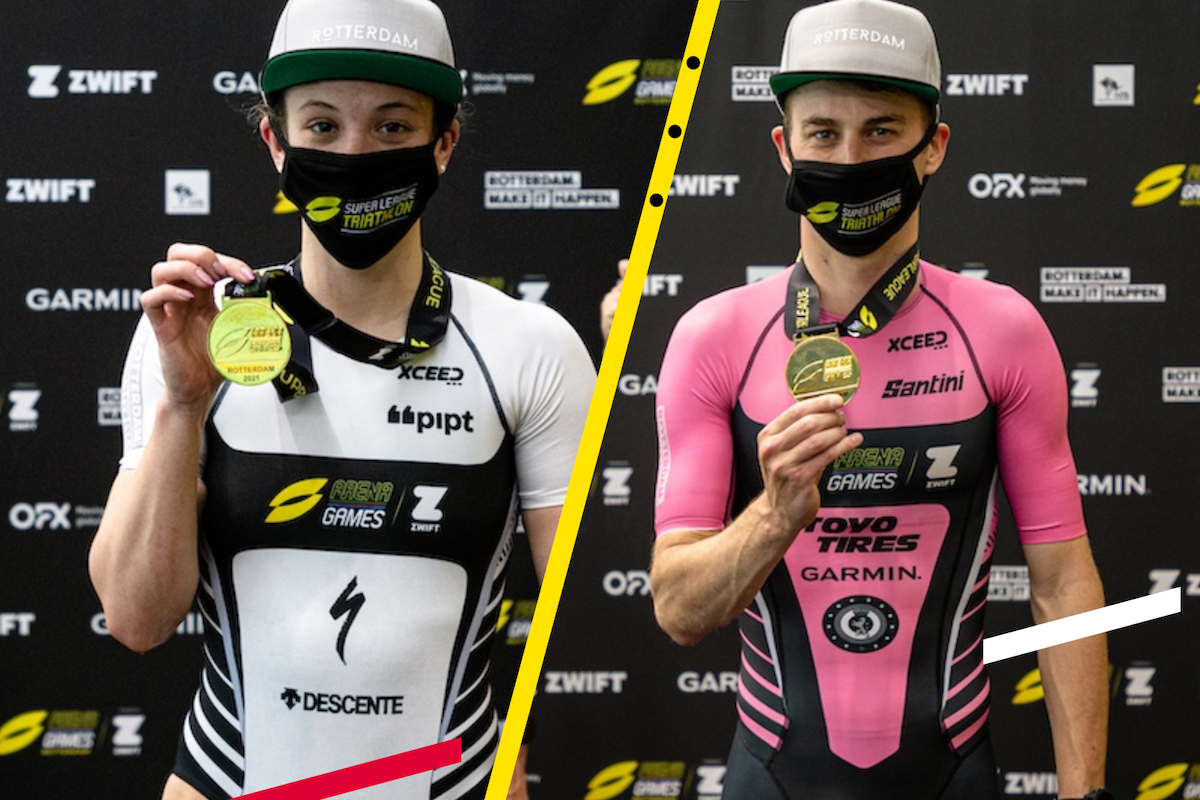 The Zwemcentrum in Rotterdam, Netherlands, was the return host of this melding of virtual and real-world racing. And like its Arena Games debut in 2020, it again provided the backdrop for an enthralling two hours of elite tri racing.

The women’s race played out as a showdown between Coldwell and her British rival Beth Potter, who stormed to the SLT Arena Games London title three weeks ago. Yet this time it’d be Coldwell who’d take the Triple Mix glory, surging ahead on the final run discipline of the day to take her debut Arena Games crown.

As the SLT Arena Games arrived back in Rotterdam, all eyes were on London champion Beth Potter, who’d produced a world record road running 5km time in the intervening period.

Stage 1’s swim-run-bike format saw Potter taking control early on the final bike leg, creating daylight between herself and Coldwell at last and leaving the rest of the field distant specks in her rear-view mirror to take the maximum 10 points ahead of Coldwell.

Stage 2 began in a similar vein to Stage 1, with Coldwell and Potter pushing the power at the front of the 1km run. That continued onto the bike leg as they were joined by Godoy, who’d lead the charge into T2. Coldwell surged ahead at the 50m mark of the final 200m swim and witnessed the 26-year-old claim the Stage 2 win ahead of Potter and Godoy. The battle was on for Rotterdam glory in Stage 3.

Stage 3’s bike leg would be a cagey tactical affair, with all 10 athletes riding in a pack. Onto the swim and it’d be Coldwell who’d take control, before extending that advantage over the former Olympic Games track star Potter, 29, on the final and decisive run leg. The overall victory was Coldwell’s, with Potter taking second overall and Godoy third.

Coldwell said: “My legs are like jelly was my first thought after finishing! I’m really pleased [with the win]. I felt like I made some silly mistakes at the Arena Games London, so it was nice to come here and get on top of it. I’ve missed that feeling.

“I’ve not won a race for some time, so it’s great to come out on top in what’s been an odd 18 months. I knew I could make my time up in the swim and I’ve really been working on my run over the winter off season, so it’s nice to be consistent and reap the rewards of that.”

Into the water for Stage 1’s opening 200m swim in the Zwemcentrum’s Olympic pool and experienced French triathlete Aurelien Raphael would lead at the front ahead of compatriot Anthony Pujades. Raphael would maintain a very slight advantage into T2 after the run leg, with Schomburg and Van Riel in his slipstream.

Onto the bike and a group of six would form, with Brit Alex Yee and Portugal’s Vasco Vilaca joining the mix. It’d come down to a cobblestone shootout for the Stage 1 title, with Vilaca breaking free before being usurped by Van Riel at the line. Yee would take Stage 1 bronze.

Onto Stage 2’s opening 1km run leg and Yee would take control, establishing a 3sec advantage over Van Riel and Schomburg. A group of six would form on the 3km bike before Van Riel would enter the water marginally ahead of the chasers for the final swim. The 28-year-old Belgian would maintain that advantage throughout, holding off a field of formidable tri swimmers to take the Stage 2 win and make it 20 points from 20.

All was to play for on Stage 3, but Van Riel held the strongest hand with 20 points out of 20. In a similar vein to the women’s race, tactics came into play and the group rode as a whole onto the bike’s cobbled section with 200m to go. Local Rotterdam hero Marco Van Der Stel would take the bike leg win.

The final 200m swim saw Pujades take to the front, with Van Riel close behind to maintain his position as the heavy favourite to take the Rotterdam title. Onto the run and Yee would surge to the front of the chasing pack behind Van Riel, moving from fifth to second in the Stage 3 placings. But Van Riel was too far in front, securing another stage win to make it a perfect 30 points out of 30 in Rotterdam. Yee would be second and Raphael third overall.

Van Riel said:“I’m super happy to be where I am with my training and what I’ve been doing with
coach Joe Filliol’s training group. I like that I’m not only a training champ and that I can
perform in races.

“I try to be as comfortable as possible and conserve energy in the few moments where you can do it during Super League racing. It was a lot tighter than in London and really came down to sprints and a matter of seconds or even milliseconds. It was aggressive and tighter racing throughout. The French guys are swimming machines and they’re absolute units. They made it hard for me from the start.”