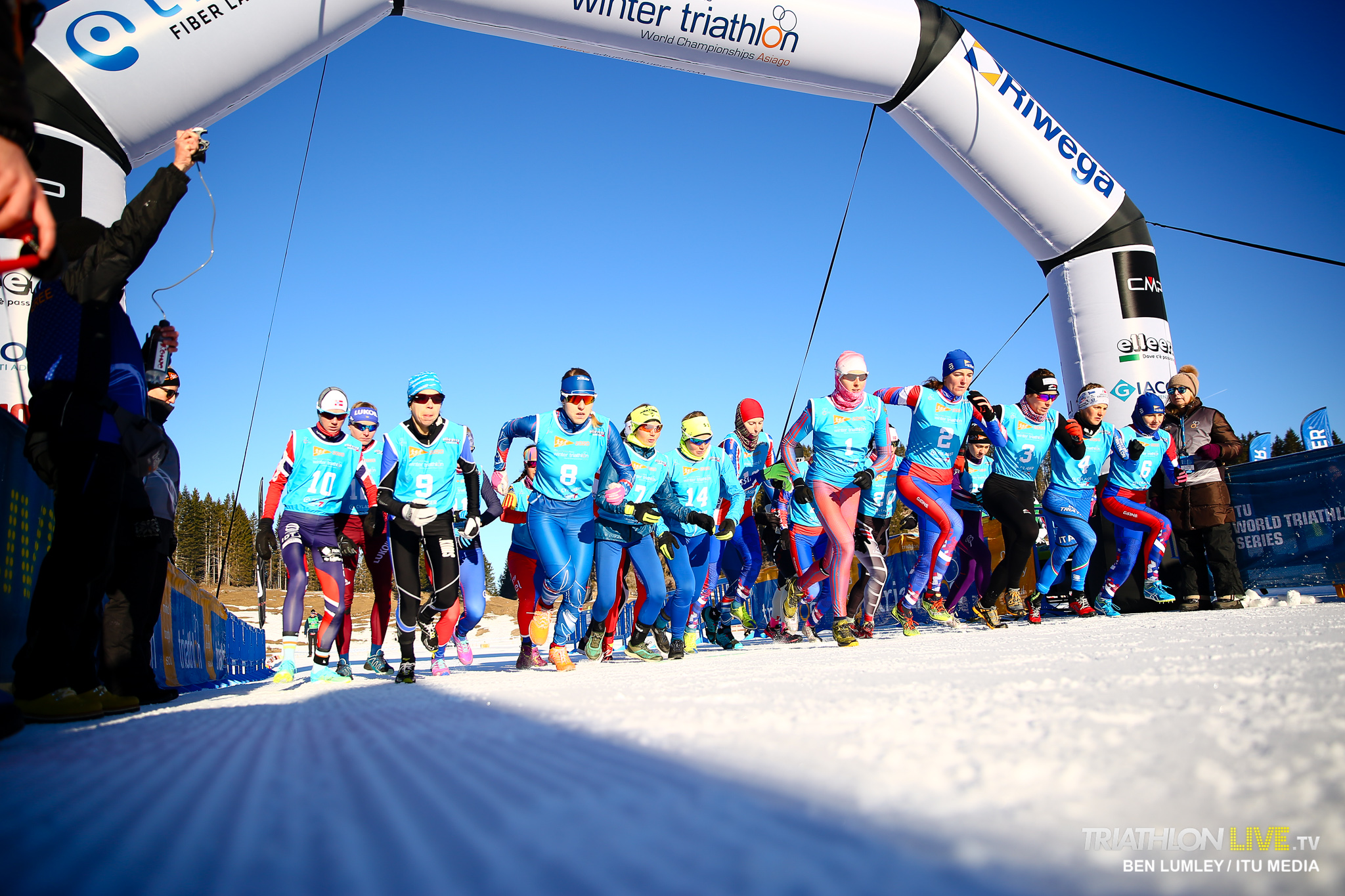 ussia showed once again that their dominance in the Winter Triathlon scene is, for the moment, unbeatable, claiming both Elite World crowns and a complete podium sweep in the Men’s race. With two magnificent displays, Pavel Andreev claimed in Asiago his 8th World title, while Daria Rogozina earned her second crown in the first year she is competing in the Elite category.

With really cold temperatures but the sun fighting to warm up a little bit the magnificent course in Asiago, 28 women lined up at 9 am for the first race of the day. And it was clear from the first meters of the run that the Russian team was going to make it very complicated for the rest of the field to push them out of the podium positions.

In the first two laps of the run course, a group of six athletes commanded by Anna Medvedeva spread out, with another three Russians -Daria Rogozina, Yulia Surikova, Svetelana Sokolova– plus Sandra Merihofer (ITA) and Marte Katrine Myhre (NOR) in the mix. The managed quickly the continuous up and downs of the run course, with the snow in perfect conditions for running, and by the time the leaders made it to the first transition, it was the Norwegian leading the group by 20 seconds.

But when it was time to get on their bikes, the Russians proved their experience and made some impressive transitions, with Surikova leaving transition in the first place. She knew that she needed some time before heading to the cross country ski section if she wanted to stay in the top positions, so she pushed incredibly hard on the MTB course to maintain the gap with her teammates.

Behind her, Rogozina and Sokolova kept the Russians aspirations for a podium sweep alive, while Medvedeva fell a little behind. But the four of them knew that the race was gonna be decided in the last section, and when it comes to show performance on skies, there’s no other like Rogozina.

The young Russian, who won last year both the Senior and the U23 categories in this same course in Asiago, was determined to chase Surikova as soon as they were gliding through the Campolongo, and it took her only one lap to pass Surikova and take the lead of the race.

But Rogozina was not the only concern for Surikova, a veteran athlete with two world titles on her belt who knows that she has room for improvement in the cross country ski section. Behind her, Medvedeva was determined to shine on her debut in winter triathlon world.

Rogozina was all smiles when she took the tape, stopping the clock on 1.33.22, claiming the World crown on her first year as a senior athlete, making it a brilliant start of the year after her victory also in the Harbin Winter Triathlon World Cup. Only 24 years of age, the young Russians is also the current European Champion of cross triathlon, and will be indeed the one to beat in the European championships that will be held in Cheili Gradistei at the end of the month.

Behind her, Medvedeva grabbed the silver medal on her debut, marking the fastest split of the day on the ski section, while her teammate Surikova crossed the finish line in third completing a podium sweep for the Russians.

But not only three but the fourth athletes crossing the finish line were from the same country, with Svetlana Sokolova claiming also the U23 World Title. Behind her, Maria Luiza Rasina (ROM) and Nadezhda Belkina (RUS) completed the podium.

In the junior’s race, the two young athletes from Slovakia led the race from beginning to end, trading places one and two during the whole race to finally have Zuzana Michalikova claiming the World title, while Margareta Andreeva finished in the second place. The bronze medal was for Polina Sadovaia (RUS).

Pavel Andreev showed again in Asiago that he is the Winter Triathlon King. The Russian displayed all his skills in Campolongo di Asiago, controlling the situation in the run section, to then keep an eye on the leader in the Mountain Bike and attack in the last kilometers of the cross country ski to claim the title for the eight time.

With almost 30 men toeing the start line on a cold and sunny morning in Asiago, and the thermometers marking 9 degrees below zero, it was the current Silver medallist Dimitri Bregeda who took the lead in the first lap of the run circuit, followed close by a young Italian, Franco Pesavento, to much delight of the local crowds.

Both of them push hard while the big favourite, Andreev, stayed some 50 meters behind on a small group. And in this same position they all arrived to the first transition, but things were about to change a lot in the demanding bike course.

With Bregeda leading the first uphills, he was quickly chased by Marek Rauchfuss (CZE). Bronze medallist in the Worlds in Asiago last year, the Czech was the one to beat today in the bike course, passing all strong Russian men to open a gap that ended up being of almost 50 seconds by the time they all got to their skis.

But experience is a grade, especially for Andreev, who managed to keep the calm and wait until they were all on the skis. Lap by lap, the Russian chased Bregeda first, to then make a final push to pass Rauchfuss only 500 meters before crossing the finish line.

The Czech crossed the finish line in second place, just seven seconds behind the Russian, while Bregeda completed the podium adding a bronze medal to his extense collection.

Cheered by hundreds of spectators, Guiseppe Lamastra managed to finish in the 4th place, improving considerably his performance in the same venue last year, where he could only finish in the 11th position.

In the U23 men’s category, and for much delight of the local crowds, victory was for local hero Franco Pesavento, born in the Asiago region, who repeats on top of the podium for the second consecutive year. Behind him, Evgenii Evgrafov (RUS) and Mario Kosut (SVK) completed the podium.

The race of the youngest athletes, Junior Men, was filled with drama. The young Norwegian Casper Ronning, only 16 years of age, dominated the race from the beginning to claim the Junior World Title, with Russian Yaroslav Kurilenov finishing in second.

Vladislav Semenov was sprinting for the bronze medal when, 50 meters before crossing the finish line, he fell twice to be passed by his teammate Danila Egorov, who ended up in the third place of the podium.