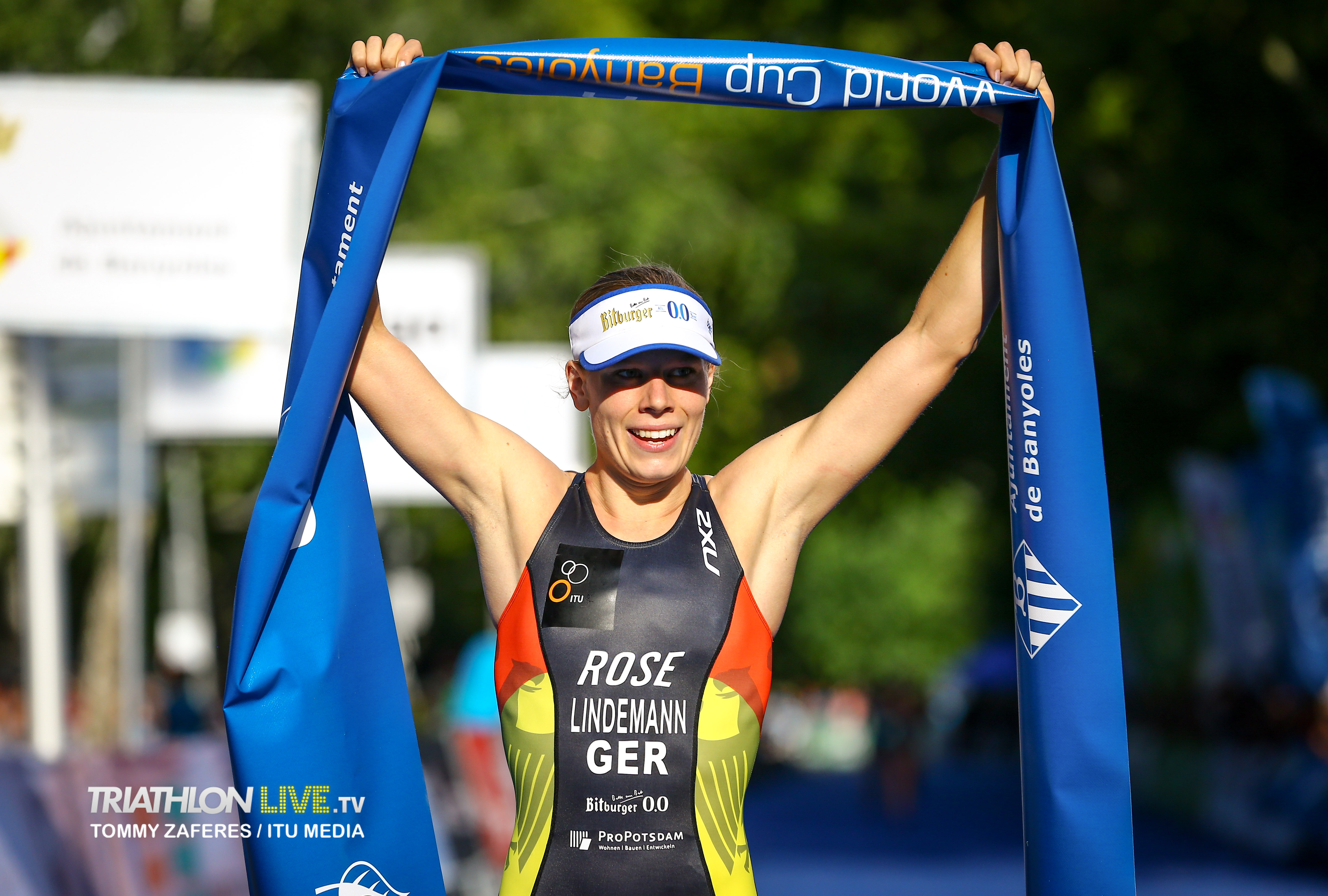 The scenic little town of Banyoles, in the north of Spain, was the perfect scenario for 130 of the world’s best triathletes to return to racing just a week after the Grand Final for the 2019 ITU Banyoles World Cup, with two fast and furious races that saw Laura Lindemann (GER) and Vincent Luis (FRA) once again on top of the podium.

The race in Banyoles started with a last minute addition to an already packed start list. After being on the waitlist for a week, two-times World Champion Flora Duffy (BER) decided to show up in the athlete’s lounge in case there was a last-minute withdrawal and it was just 30 minutes before the start of the race, when the officials checked that Julia Hauser(AUT) was not present, when she was given the green light to make it to the start line.

With almost no warm-up and wearing an unusual for her number 69, she the last one of a field already packed, with last year’s World Champion Vicky Holland (GBR) wearing the number 1, but with other usual athletes in the podiums like Kirsten Kasper (USA), Laura Lindemann (GER), Emma Jackson (AUS) or Claire Michel (BEL), just to name a few.

As soon as the horn gave the start to the race, Duffy proved that she was there for a reason, and commanded the women in the 750m swim in the pristine waters of Lake Banyoles. Right on her feet was Sara Perez Sala (ESP), cheered out of the water by thousands of spectators, who went wild when local hero, Carolina Routier (ESP) was also in the front pack out of the water.

The three of them were joined by a powerful group of athletes, including Lindemann, Kasper, Tamara Gorman (USA), Maya Kingma (NED), Gillian Backhouse (AUS) and Simone Ackermann (RSA) and managed to open a gap that proved to be decisive, with 42 seconds in the first lap of the three that the triathletes had to do around the lake. With the nine athletes working together in turns and Duffy commanding the small group, the chasers had little to nothing to do, and kept loosing time in the two remaining laps even though Vicky Holland and Miriam Casillas Garcia (ESP) were doing their best to keep pushing.

By the end of the technical and flat 20km bike course, the nine leaders had one minute and 15 seconds over the chasing group, and it looked like the medals were going to be disputed in the fast 5km run circuit.

And even though the first one out of the second transition was Routier -flying with the cheers of the locals- Duffy showed in the first meters who was in command, and made a first move that only Lindemann and Gorman were able to follow. Leaving the rest of the group behind, the Bermudian never looked back and looked like she was ready to go back on top of the podium after the injury that has kept her out of the races for more than a year.

The three of them opened up a breach with Simone Ackermann, who run solo for most of the 5km with Routier and Kasper on her feet. And with 2km to go, Lindemann decided to make her move and put the hammer down, with Duffy and Gorman unable to follow her. The German, who finished in 6th place in the Grand Final in Lausanne last week and in the Tokyo Test Event in August, run by herself for the last kilometers away of the tremendous battle behind her among the two-time World Champion Duffy and the 2018 U23 World Champion Gorman, both excellent runners and running shoulder to shoulder until they arrive in the blue carpet.

With the finish line on sight, Gorman added an extra gear enough to cross the finish line 4 seconds ahead of Duffy to claim her second silver place in a World Cup this season, after finishing also in second in Karlovy Vary.

With Duffy grabbing the last spot in the podium, it was Kasper the one who finished in the fourth place, followed by Ackermann and Sandra Dodet, the fastest runner of the day. Holland, Routier, Maya Kingma and Sara Perez Sala closed the top ten for the day.

If the Women’s field was stacked, so was the Men’s, with the World Champions of the last 4 seasons lining up in Banyoles, and with some of the fastest athletes in the circuit also trying to put an end of the summer of races in style in the idyllic town in the north of Spain that serves as a training base for many triathlon squads. It was this time Mario Mola (ESP), World Champion in the three previous seasons and second in 2019, who was wearing number one, but with his training mate and current World Champion Vincent Luis (FRA) in number 2.

Both of them decided to line up on the right side of the pontoon, one next to the other, a decision that proved to be beneficial for Mola. It was once again Richard Varga (SVK) who took the lead from the first strokes of the swim, but closely followed by Luis, Tayler Reid (NZL) and Antonio Serrat Seoane (ESP), the Spaniard displaying again a great swim after being one of the very few athletes that has started and finished every single WTS race this season.

But the leading athletes didn’t manage to open a significant gap, which led to a massive group leaving the first transition all together, riding carefully to avoid congestions and crashes. The 20km bike course became then a careful ride with a large train of 59 athletes, all keeping an eye on the rest but also trying to save some legs for the run.

Because it was clear from the beginning that in this race, it was all to be decided in the 5km run, a flat and really fast circuit around the lake that looked like the perfect scenario for fast runners like Mola, Luis, Hayden Wilde (NZL), Jonas Schomburg (GER), Tyler Mislawchuk (CAN) or Bence Bicsak (HUN).

And it was the young German, Schomburg, the one who managed to leave the second transition in the first place, but with Mola, Luis, Mislawchuk, Wilde and Max Studer (SUI) right at his feet. Schomburg probably made its move a bit too early, with Luis and Mola quickly passing him to start what it looked like it was going to be a “Saturday fun run” among the two of them. They added an extra gear and left the chasers 20 seconds behind by the first time they passed through transition, and from there they never looked back.

Behind them, Mislawchuk, Studer and Wilde dropped the rest of the runners, probably not conscious of the Hungarian young gun coming like a train from the 17th place. Halfway through the run, Bence Bicsak had the group chasing Mola and Luis on sight, and decided to go for it. He first passed Joao Silva (POR) and Crisanto Grajales (MEX) and then set his eyes on the fight for the podium.

Ahead of him, Mola and Luis run shoulder to shoulder, with the Spaniard cheered by the local crowds, just to arrive to the blue carpet at the same time. In the last 100 meters Luis, eager to redeem himself from Mario beating him in the Lausanne Grand Final, added the extra gear enough to get him to hold the tape and claim the Banyoles World Cup, with Mola following in second.

Behind, Bicsak made the final push of the evening to pass Mislawchuk just in the final meters and claim the bronze medal, his second podium of the ITU season after his third place in WTS Yokohama. Mislawchuk grabbed some valuable Olympic points by finishing up in fourth place, with Wilde closing the top 5.

How To Make Your Bicycle Frame Look Like New