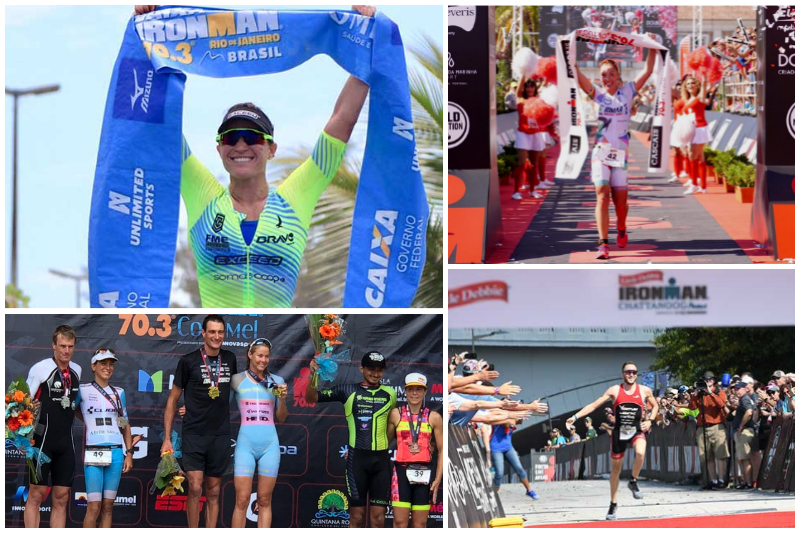 Cody Beals (CAN) blasted onto the IROMAN stage this summer at Mont Tremblant, using a brilliantly executed race  to win on home turf. Riding the wave of confidence that came with that first full distance win, Beals sought to replicate that end result six weeks later in Chattanooga.

With the swim cancelled due to unsafe conditions, Beals was lucky enough to draw the first position in the time-trial start. The Canadian would prove untouchable on the bike.  Then early in the run, it was apparent the only placings left to scrap it out for were the second and third steps on the podium as Beals. With Beals raising the finish line tape in victory, Kirill Kotsegarov (EST) and Matt Russell (USA) battled it out in the closing miles of the run, with Russell making a dramatic surge to to blast by a struggling Kotsegarov in the final mile.

Weiss and Salthouse heat it up in Mexico

Cozumel has always treated Michael Weiss (AUS) well, as he has recorded a number of wins and podium finishes on the Mexican island. In typical Weiss fashion, he dominated the field on the bike and was able to hold off a hard charge from behind mounted by Tyler Butterfield (BER) on the run to take another win in Mexico.

Ellie Salthouse (AUS) was hampered by injuries for much of 2017 and has returned to her winning ways in 2018. The Aussie came into T2 sandwiched between five women who dismounted their bikes within 15 seconds of each other. Salthouse let her feet do the talking as she held off Svenja Thoes (DEU) throughout the run to claim the win.

Pamella Oliveira (BRA) was dominant in front of a home crowd at IRONMAN 70.3 Rio de Janeiro. Proving her fourth-place finish at the 2018 IRONMAN 70.3 World Championship was no fluke, Oliveira led wire-to-wire, netting the victory by a 15:36 winning margin over her closet rival.

Reinaldo Colucci (BRA) is always a threat at any distance and is particularly difficult to beat when racing in South America. True to form, the Olympian came out of the water with the leaders then rode solo into T2, enjoying a two and half minute advantage on the field. That would be enough of a buffer the towering Brazilian would need as he cruised into the finish line chute unchallenged to take the win.

First man out of the water was Spaniard Fernando Alarza (22:32), in his very first IRONMAN race. He also was first out on the bike course, his chasers far off. French Kevin Rundstadler made his way to the front and finally overtook Alarza on the final kilometers on the bike. Rundstadler started the run with Alarza at his back and the Spanish newcomer made it back to the leading position already by the 5K mark. Rundstadler fell back and there were quite some changes amongst the chasers. Filipe Azevedo (POR), Colin Norris (GBR) and João Silva (POR) were amongst those who tried to catch up – but failed and couldn’t close a 2-3 minutes gap to Alarza. The Spaniard finished superiorly in 3:54:57. Second went to João Silva in 3:57:23. The podium was completed by Silva’s countryman Filipe Azevedo in 03:57:41.

In the women’s race, it was Beatrice Weib (AUT) who exited the water in first (25:19). She also dominated on the bike until 26K, when Agnieszka Jerzyk from Poland took over the lead. Weib had a faster transition and made it back to 2nd place out on the run, chasing Jerzyk who already had built a 2:14 gap. At 10K, Katrien Verstuyft (BEL) took over 2nd position. Sarah Lewis (GBR) came from behind and made it to 3rd place at 15K. There was no chance of catching Jerzyk, and the Polish athlete won the race in 4:26:06. Verstuyft was 2nd in 4:27:16 and Lewis finished 3rd in 4:30:17.